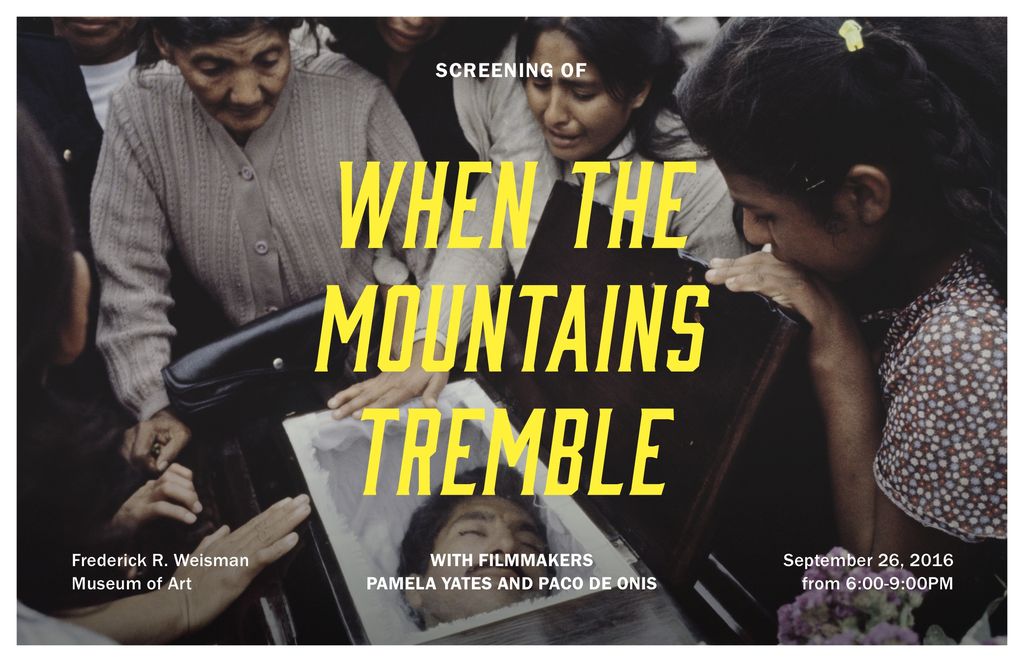 “When the Mountains Tremble,” a visual narrative of social injustice in Guatemala, screened Monday Sept. 26 at 6 p.m. in the Frederick R. Weisman Museum of Art.

Re-released in 1992, the 1982 documentary is by married couple, film directors and founders of Skylight Films Pamela Yates and Pico de Onis. It follows the trials and tribulations of Maya K’iche Indian and 1992 Nobel Peace Prize Winner and Laureate Rigoberta Menchú, who is trying to navigate her people through “a legacy of state and foreign oppression” during the Guatemalan Civil War.

In addition to being featured on PBS, the film received the Sundance Film Festival Special Jury Award, the American Film Festival Blue Ribbon Award and the Havana Film Festival Grand Coral Award of Best North American Documentary. The film has also received international attention, as it was displayed in 40 American cities and 30 foreign countries, according to the “When the Mountains Tremble” Weisman screening press release. This is including the subject of the film, Guatemala, according to Jane Chang Mi, Visiting Assistant Professor of Digital Arts.

“[The documentary] it’s also about the power of storytelling, the power of telling a narrative that is not only very specific to Guatemala, but also has universal resonance,” Yates said.

Yates created her debut documentary after she caught wind of the Guatemalan Civil War while working as a sound recordist in Nicaragua and El Salvador. A combination of the mistreatment and slaughtering of journalists covering the war, and the novel, “Bitter Fruit” initiated a call to action for Yates. She felt that America was “on the wrong side of history” and that promoting literacy of these issues could usher in change.

“I felt like as an American citizen, there was a responsibility to stop the violence,” Yates said.

Mi, who has only been working at Pepperdine for over a month, according to Assistant Professor of Art Gretchen D. Batcheller, met Yates and de Onis at the National Alliance of Media Arts and Culture (NAMAC). NAMAC is a “leadership lab” at the Sundance Film Festival that the couple “helped facilitate this year,” according to Mi. As Yates and de Onis were in the area last weekend for the Haskell Wexler chair endowment at USC and International Documentary Association’s Getting Real 2016, according to Yates, bringing the couple to speak at Pepperdine “organically happened,” according to Mi.

This event is a “very transdisciplinary” effort that involves the communication and film departments, according to Mi. It is co-sponsored by Studio Art and Art History and includes the participation of International Student Language (ISL), Hispanic Studies, according to Batchellor. Mi also believes the screening could be of relevance to the Pepperdine Law School.

Mi believes the documentary is of relevance not only because it spans many fields of study in Pepperdine academics, but also that the screening is extremely “timely,” as the opening of the UN is this week.

“You can tie together a conversation about what’s going on in the world, whether it be Syria, whether it be Korea, because this is a part of it,” Mi said.

When asked if this impeccable timing was intentional or a coincidence, Yates replied that it was a combination of both.

“It’s hard to time things on purpose, especially where history is concerned. But you have to be ready and nimble to react to things. I’m always looking and learning and monitoring world events that connect the world rather than divide it,” Yates said.

Copies of “When the Mountains Tremble” and “Grenito” will be readily available to Pepperdine Students, according to Mi. The third film in the series, “500 Years is in the works,” according to Yates.

All students can take something away from “When the Mountains Tremble,” especially in the light that Menchú was only 22 years old when the documentary was filmed, not much older than the tail end age of undergraduate students, according to Yates.

“Each of us has a ‘grenito’ or tiny grain of sand to contribute to social change,” Yates said.