When Forgiveness Shocks the World

Sometimes an act of offense is minor, and it takes seconds to forgive.

Other times it is incomprehensible, almost impossible to find the means to forgive.

“I forgive you,” Nadine Collier, daughter of victim Ethel Lance, told the shooter in the first hearing. “You took something very precious away from me. I will never talk to her ever again. I will never be able to hold her again. But I forgive you! And have mercy on your soul. You. Hurt. Me! You hurt a lot of people. But God forgives you. And I forgive you.”

Their ability to forgive in the face of such loss shocked the world.

For Christians, forgiveness spans from a simple “I’m sorry” to the grace they believe Jesus Christ poured out on the cross. Elizabeth Mancuso, Seaver Psychology professor, and Eric Wilson, preaching minister for the University Church of Christ, both agreed that forgiveness is complicated, messy and crucial for healing to happen. And sometimes, it requires a higher power.

With how widespread forgiveness is, it is hard to define forgiveness and all of its moving parts.

“I think the most common definitions of forgiveness [are] kind of centered around the idea that there’s been some kind of transgression that’s happened,” Mancuso said. “And that forgiveness is about cancelling the debt associated with a transgression.”

Mancuso said there are two types of forgiveness — decisional and emotional.

When a person chooses to treat the person who wronged them as though they had not, they are enacting decisional forgiveness, Mancuso said. She explained that emotional forgiveness centers around the forgiver changing their thoughts about the offender.

A common misconception about forgiveness is that it leads to forgetting or condoning of behavior, Mancuso said. From a clinical and research perspective, forgiveness has a completely different goal than approving the behavior.

When choosing to forgive, one can still illustrate a sense that the action or transgression was wrong, Mancuso said. And forgiveness doesn’t always lead to reconciliation.

“I got to make a choice whether I trust them or not to really reconcile that relationship completely,” Wilson said. “But at the outset, even if I don’t go back into that relationship because of that act of violence, I can still wish them well. I will not strip them of their dignity. And I won’t do anything to get in their way of their further growth.”

One doesn’t have to forgive and forget, Wilson said, but forgiveness is necessary for healing.

“You can move on [in] separate ways and still engage in forgiveness, because what’s really important to understand is that forgiveness really is for the forgiver,” Mancuso said.

Mancuso sees examples of forgiveness in her own marriage.

“We might have disagreements where I often will say, ‘I’m sorry, I didn’t consider your viewpoint’ or ‘I didn’t understand what you were seeing,’” Mancuso said. “Or if it becomes emotionally straining on me, if we’re having a disagreement, and then I can say, ‘I’m sorry, I didn’t mean to get so emotionally intense’ or ‘I didn’t mean to raise my voice.’”

First-year Maddie Joe also works on forgiveness with others, especially her parents regarding her academics. She said she tries to understand where her parents are coming from, taking their criticism constructively to do better academically rather than taking it as a beratement.

“And then forgiving others, forgiving your parents for being so hard on you because it is all for you,” Joe said.

Outside of forgiving others, Joe works on forgiving herself.

“I would say self-forgiveness is something that I really have to focus on the most,” Joe said.

She works on this when she doesn’t have the grades she expects or when she finds herself socially and mentally exhausted. One of the ways Joe said she works on her self-forgiveness is looking in the mirror and saying, “You’re going to do great.”

“I think that self-forgiveness is one that we often neglect and can be the most important of all,” Joe said.

Senior Tommy Koppang uses an age-old technique when he is working on forgiveness — he said he tries to put himself in someone else’s shoes.

“Forgiveness is just understanding where someone is coming from and allowing yourself to, you know, just forgive them,” Koppang said.

Koppang said he thinks he “gets over things pretty quickly.” He puts himself in his friends’ shoes when they take their family problems out on him. This helps Koppang to understand why his friends chose to act that way.

First-year Nathaniel Lerch finds himself having to work on forgiveness for his siblings.

Lerch said it is harder to turn the other cheek. He chooses to turn to God to find the power to forgive his siblings.

Joe turns to God as well when she needs to forgive.

“I think that it’s a mentality of forgiveness,” Joe said. “A mentality to consciously be forgiving and showing grace in the moment and not after you thought about it, not after you’ve got more depth about it. You have to forgive in the moment that same way that God forgives you immediately; he doesn’t hold on to that for even a second.”

Religious coping — a form of turning to God — aims to address a stressor. Mancuso performed a study that focused on divorced couples and their use of religious coping. Her study found that it is common for adults to turn to God in a divorce. Doing so helped the individual experience less verbal aggression with the ex-spouse, engage in less demonization of the ex-spouse and experience more positive spiritual emotions. The study also found that turning to God to forgive seemed to be most functional when it helped to resolve the hurt or offense.

Leaning on Scripture can aid an individual who is looking to God to help with forgiveness. Forgiveness requires understanding differences and what caused the hurt and then going through a process of making peace with that hurt, Wilson said.

“But it always goes back to the character of God — that seeking that sense of oneness and wholeness and completeness of individuals being in whole relationships,” Wilson said.

Forgiving in a healthy way can help someone decide where the relationship goes from the moment of offense. Wilson said some healthy steps include seeing others as loved, divine beings, coming to terms with what forgiveness is and isn’t, going to God for the healing process to begin and being far enough into the healing process to go to the other person and forgive them.

“Then when I — we’ve had that moment of forgiveness — then we determine whether we can move into reconciliation,” Wilson said.

Forgiveness in times of crisis

In the Emanuel Nine case, family members said they did not plan to even speak at the initial plea hearing, but they felt God’s spirit move them to offer forgiveness, Hawes wrote.

Black and Brown communities have been dealing with the pains of marginalization and oppression for some time, Wilson said. They seek strength from their communities and understand forgiveness is linked to survival. These marginalized people understand the importance of love, forgiveness and how resentment in the heart is destructive to them.

“I would imagine that those people are so immersed in the story of God,” Wilson said. “And so immersed in this understanding of the power of forgiveness that they look upon the person that caused this more with pity than anger, and through their relationship with God, they had the power to offer forgiveness.”

The families forgave because they believed Scripture requires it, Hawes wrote. They forgave to heal, not to reconcile with the person who caused them hurt.

Mancuso expressed that forgiveness is for the forgiver, and Wilson made the same point. But this level of forgiveness is very rare — forgiveness when something so close and dear has been stripped away.

“Unless you are an empowered person, their level of forgiveness is almost impossible,” Wilson said. “Impossible.” 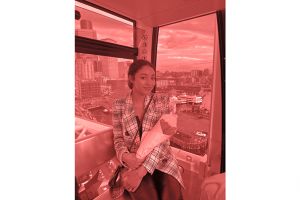