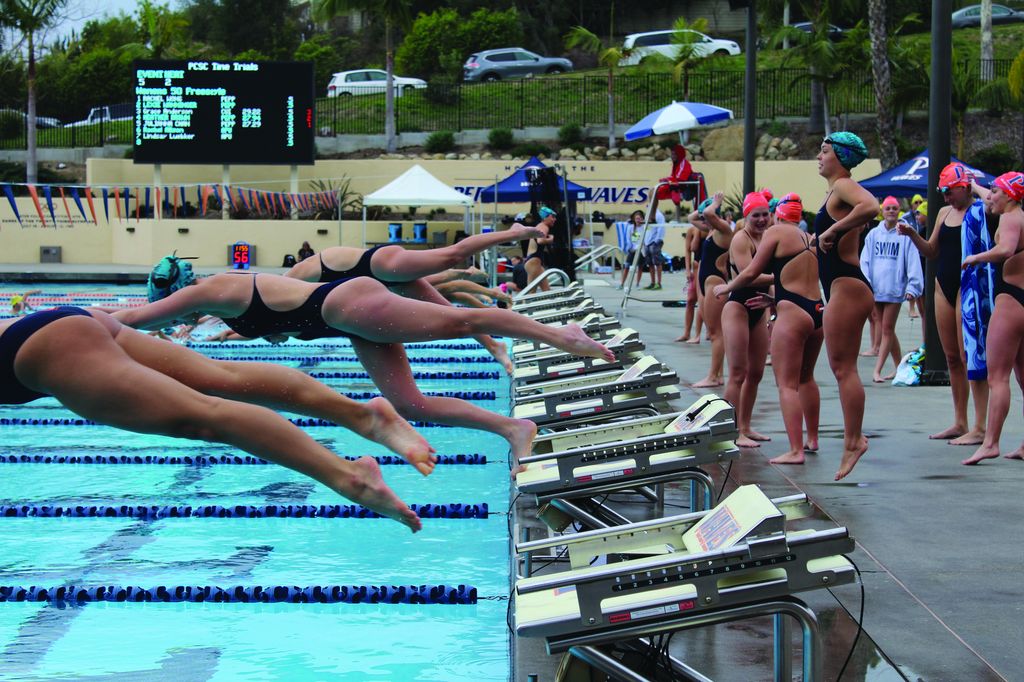 The Pepperdine Swim and Dive team has had a fantastic 2015-16 season, so it only makes sense to have a fantastic weekend at the Pacific Collegiate Swim Conference Championships. The PCSC tournament, which was was held at East Los Angeles College (which is actually in Monterey Park) Friday through Monday, featured many marquee Waves swimmers and divers performing their best.

The first day of competition certainly didn’t skimp on the excitement, as the 200 medley relay (which is when each of the four swimmers swim a different stroke) team of sophomore Sabrina Altman, senior Jessica Mosbaugh, senior Nicolette Barreiro and senior Allison Naasz placed fourth overall and were a mere .12 seconds away from a Pepperdine all-time record, with a time of 1:46.47. Furthermore, the Waves finished day one in second place, only behind UC San Diego.

During the second day, the Waves maintained their second-place rank behind UCSD thanks to some strong performances behind freshmen Joie Eckhard and Caroline Boone, who placed 21st and 22nd in the 500 free. Several other swimmers joined the Pepperdine history books on that Saturday as well, one of whom was Mosbaugh, who swam the third-fastest 200 individual medley time in Waves history with a time of 2:06.23. Naasz also had a stellar performance by swimming a 23.61 in the 50 free, good for the second-fastest time Waves time ever in that race.

Day three was a historic day for Pepperdine swimming, as Mosbaugh continued her fantastic weekend by not only winning the 100 breaststroke in a 1:02.16, becoming the PCSC champion in the process, but also setting an all-time Pepperdine record in that event. And that wasn’t the only impact on the Waves’ record book that day, as Naasz got the third-fastest all-time Pepperdine mark in the 200 free with a 1:52.61.

The 400 medley relay team of Altman, Mosbaugh, Barriero and Naasz (the same team who raced the 200 medley relay two days earlier) got fourth place in the PCSC and also recorded the third all-time fastest Pepperdine time in that event. These fantastic performances, as well as freshmen Julianna Chan and Megan Henley placing 7th and 10th in the 100 breastroke respectively, helped the Waves swim and dive team maintain their second-place position in the standings with one day to go.

On the fourth and final day, the Waves showed no signs of slowing down. Junior Erin Himes raced through the long-distance 1650 freestyle to get a personal best time of 18:16.43 and 12th place. Freshman Allie Carter wrote her way into Pepperdine swim history by not only reaching sixth place in 200 fly with a 2:05.92 time, but also obtaining the fourth best-ever Pepperdine time for that event.

Seniors Mosbaugh and Naasz continued to shine in their final collegiate event, the former swimming a 2:14.69 in the 200 breaststroke, good for second place in the PCSC and second place in the Pepperdine all-time records. Naasz snagged a seventh-place ribbon in the 100 freestyle with a 51.77 time, resulting in her also breaking into the top-five all-time Pepperdine times for that event.

Overall, the Waves finished the weekend in fourth place in the PCSC, their best placement since 2010. The Waves team had a fantastic final sendoff to a great 2015-16 season, and considering how many freshmen performed strongly, Pepperdine swim and dive should be in good hands in the future.