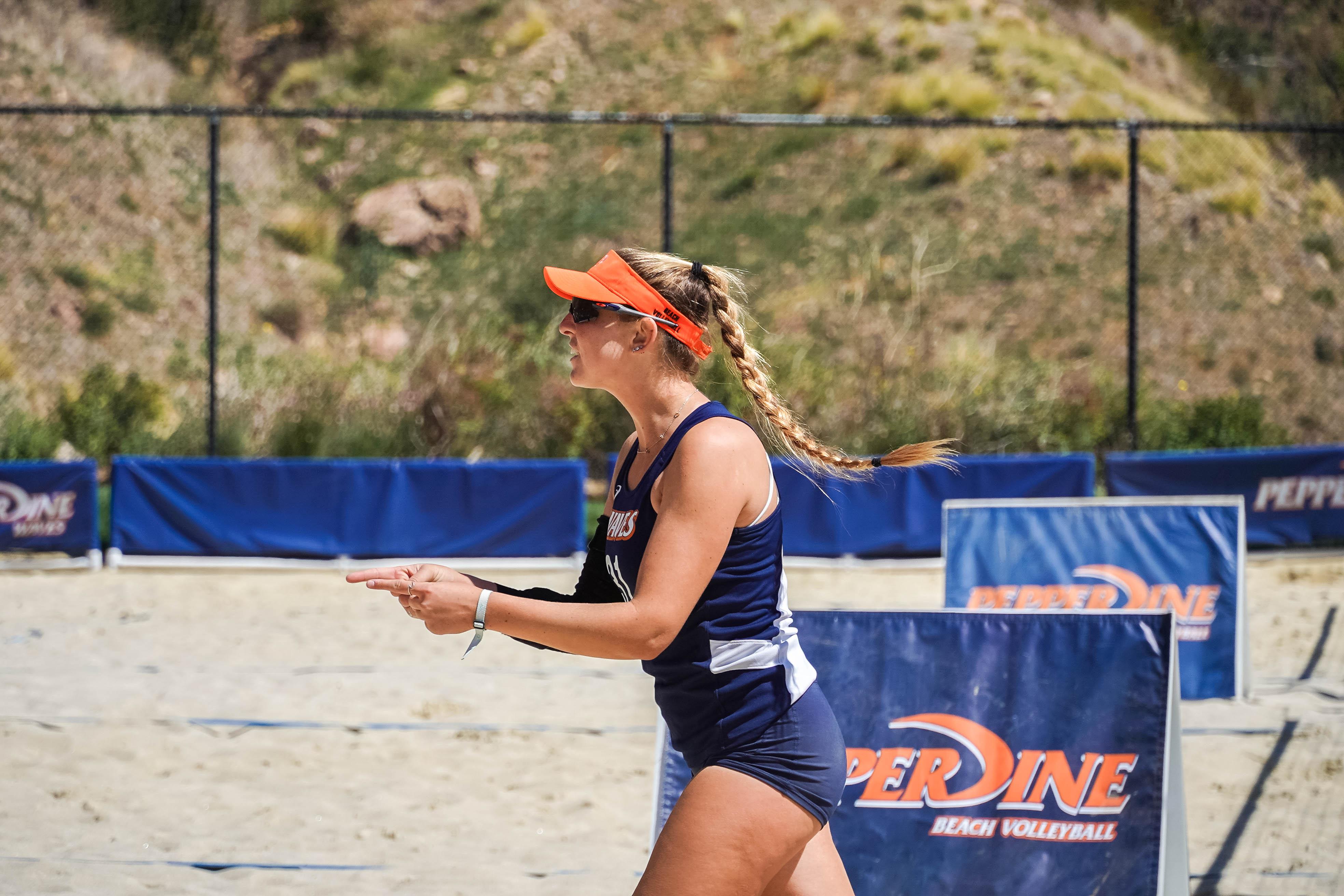 Freshman Calista Wright celebrates a point during the Sunday, March 21 beach volleyball matchup versus Concordia and USC at the Malibu campus courts. Wright recorded 24 kills against the Eagles.

The No. 8 ranked Pepperdine Beach Volleyball played a doubleheader against Concordia University Irvine and the No. 1 ranked University of Southern California in Malibu on March 21. The Waves were dominant against the Eagles as they swept them 5-0, but struggled again against the Trojans and lost 4-1. With the win and the loss, Pepperdine’s record moved to 2-7 on the season.

In their first match against Concordia, the Waves were electric, as they collected first-set wins on all five courts.

Senior Brook Bauer said the team feeds off of one another’s match victories.

“I think after the first two matches a certain energy and intensity was created,” Bauer said. “Every set that I went into after the victories filled me with confidence and contributes to a cohesive team dynamic.”

Junior Simone Priebe and junior Melaine Paul started off strong on court two, besting the Eagles 21-16, 21-8. Priebe had 8 kills and Paul had 13, along with 3 aces.

Freshman Calista Wright and sophomore Mary Sinclair continued the fast start with a win in three sets by scores of 21-18, 22-24 and 15-8.

Continuing the domination were senior Alexis Fillipone and sophomore Sutton Mactavish, who dropped the hammer on the Eagles in two sets, 21-11, 21-5, which won the dual for the Waves.

Mactavish said the connection between her and Fillipone was working well against the Eagles.

“When we are able to play freely we can feed off each other’s energy and play more aggressive,” Mactavish said. “I find that we play well when we are encouraging and communicating throughout the match.”

The Waves did not slow down after securing the win. The connection between Bauer and graduate student Carly Skjodt was on display, as they handled business against the Eagles, winning 21-12, 21-17.

“My connection with Carly yesterday was really good and it was a fun day to play,” Bauer said. “Our communication about defense and serves was purposeful and we just had a great day.”

Head Coach Marcio Sicoli said the team was great from start to finish.

“When we talk about beach volleyball, sometimes we think about it in terms of pairs, but it is a big team sport,” Sicoli said. “When your teammates are on the scoreboard it creates momentum and confidence with the way you play.”

While the Waves were unstoppable against the Eagles, they struggled against top-ranked USC.

“We definitely had to adjust our strategies by becoming more aggressive at the service line, as well as with attacking and blocking,” Skjodt said. “Having played USC before, we knew more information about their players than we did about Concordia, so we had a game plan based on our past experiences against them.”

Despite the team’s familiarity with USC, Bauer and Skjodt claimed the only match win in the dual against the Trojans. All other Waves pairs fell in two sets.

Pepperdine has now played USC four times this season, and has not yet won a dual against them.

“This was the last time we played USC and it has been weird because we have been exclusively playing West Coast teams,” Bauer said. “The exciting part is that yesterday we played our best against them and we are only halfway through the season, so if we keep showing up like we did Sunday I think we can be dangerous.”

“Each time that we play them we get better, despite what the scoreboard says,” Skjodt said. “USC is the number one team in the country so anytime we play them it is a big deal, and I know if we keep working hard then we are going to be able to catch them at some point.”