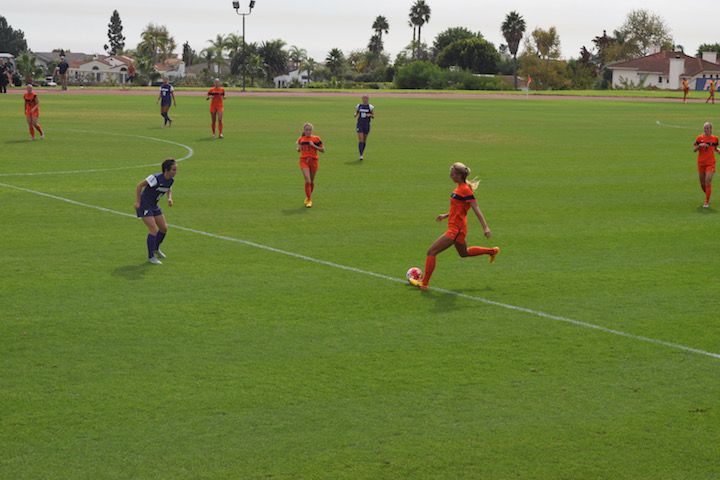 Waves’ soccer suffered two hard losses in away games during the last week of October. On Thursday, Oct. 29, the Waves faced off against BYU, but fell 3-0.

In the following game on Saturday, Oct. 31, the Waves tried to make a comeback, but in the end fell just short of a win, losing to the San Diego Toreros in overtime.

In the rainy, cold match against BYU, the team was unable to put anything past the Cougars’ goalie, but their shots were on target throughout the game.

Junior midfielder Meghan Schoen made a shot at the goal in the 14th minute of the game, while sophomore midfielder Hailey Harbison led the team with four shots.

“The team had a tough opponent on Thursday night in Provo, Utah against BYU. We were good, but on that night, to be honest, they were very good,” Head Coach Tim Ward said.

“It was a game that our staff and players felt taught us a lot. We were reminded of the intensity and athleticism we will be required to play with in order to get back to our best.”

In the game against San Diego, the Waves stepped it up and completely dominated throughout the entire play.

The Waves had seven fouls compared to the Toreros’ 12, had more possession time, more corner kicks and they also out-shot San Diego 12-4.

However, in the 94th minute, USD made a penalty kick, bringing the score to a 1-0 loss for the Waves.

During the match, sophomore midfielder Bri Visalli used her head to fire a ball towards the goal, and freshman forward Michelle Maemone sent a kick on target, but both shots were swept up by USD.

Visalli led the team with five shots, redshirt junior forward Rylee Baisden and Harbison both had two shots throughout the game, while freshmen Maemone, midfielder Christina Settles and defender Danielle Thomas each had one shot throughout the game.

Even with back-to-back losses, the team perseveres on and knows that preparation is key.

“Our team takes each game one at a time, and although we have been losing more games than we would have liked to this season, we know we are in process and that God has a plan for us. We continue to work hard and get better each day,” Baisden said.

Looking ahead to their final game, the team seeks to dominate against Pepperdine’s cross-town rival, finishing the season strong.

The Waves will take on rival Loyola Marymount in their last game of the regular season Saturday Nov. 7 at 7 p.m.