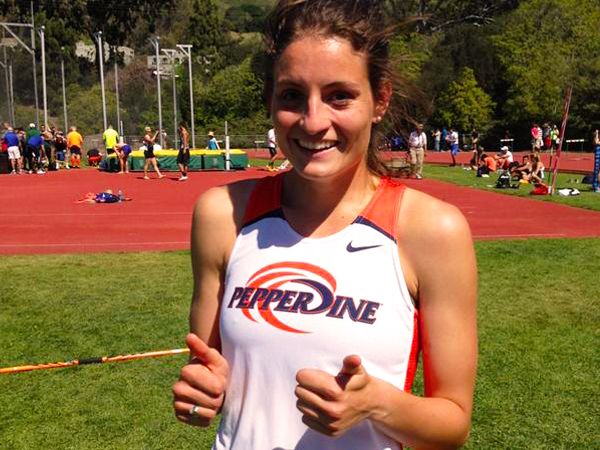 Men and women’s track and field competed in the Cal Poly Invitational this past Saturday, where junior hurdler Hannah Turpin broke a seven-year-old Pepperdine school record in the 400-meter hurdles.

“Freshman year I was close to the record, but then I unfortunately had a season-ending injury. This is my first season back, so I am just grateful to have had the chance to run hurdles again. It’s gratifying to finally be able to run a record time,” Turpin said.

“The performance of the meet was Hannah Turpin’s school-record-breaking 400-meter hurdles event, but several members on the women’s team beat their season bests,” freshman distance runner Kyle Cajero, who writes for the graphic, said.

“The women had a successful day in SLO (Cal Poly). Quite a few people ran new personal best times — it was a good showing overall,” Turpin said.

“For the men’s team, this meet was kind of a midseason lull,” Cajero said. “We have two very competitive meets after this, so we’re taking what we’ve learned from this meet and moving forward.”

The men and women’s track team is having a record-breaking season, with three Waves beating school records.

Waves at the Ben Brown Invitational:

Sophomore distance runner Torin Wile broke his own school record in the 400-meter with a time of 51.82.

“The 400-meter is not the main event that I focus on, so I surprised myself when I bested that school record. It has given me the confidence that I will finish my season out stronger than I ever have,” Wile said.

“Honestly, I haven’t given this season much thought because it’s not over. I don’t want to rest on my laurels, because there’s always more work to be done,” Cajero said.

“We have a talented young team with a lot of potential. We are still growing, but we have had numerous successes from sprints to distance, with a couple of other record or near-record times,” Turpin said. “It’s an exciting time to be a part of this group.”

The Waves are back in action Saturday, April 4 at the Pomona-Pitzer Invitational, hosted by Pomona College.