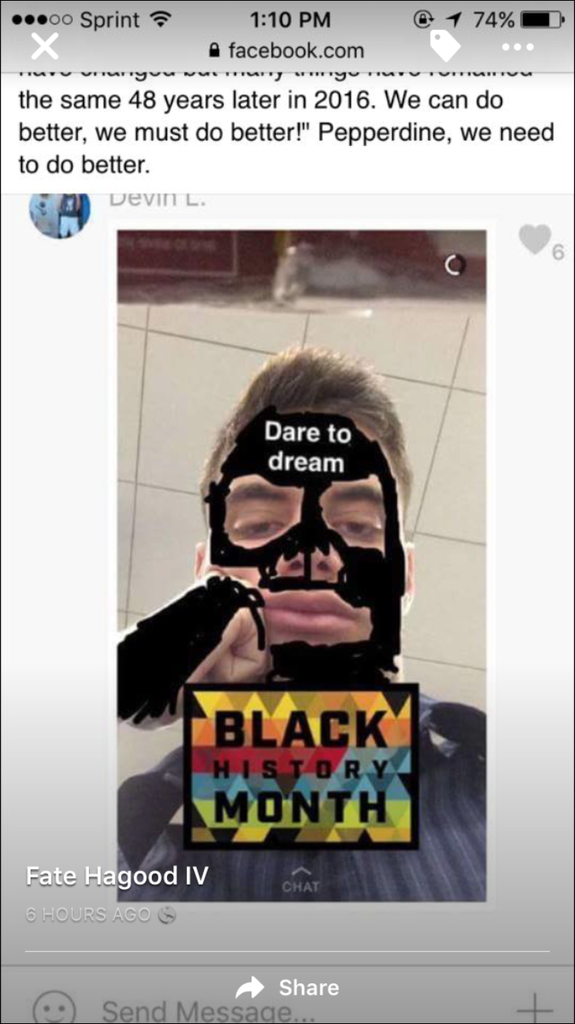 Students and administrators are speaking out following an incident involving students posting a blackface image on social media.

According to a Facebook message posted by freshman Joshua Jones, a male student in Jones’ dorm posted a blackface image of a white resident who also lived in the dorm. The image included the words, “Dare to dream” and “Black History Month.” Jones said the image was posted in the Miller dorm’s Facebook group chat and that the two students (the one who posted it and the one included in the image) “did not see any fault in their actions.”

The administration sent out a Seaver-wide email to students and faculty Friday afternoon to address the incident.

“We condemn the bigotry this conveys, and we are concerned for those in our community who were harmed by this image,” Dean of Seaver College Michael Feltner and Vice President for Student Life Mark Davis wrote in an email. “Acting on President Benton’s charge, we are taking immediate action to address the incident.”

BSA has also released a statement to the Graphic in response to the incident.

“As an organization, we are disgusted by the hateful blackface image. Regardless of intent, the impact is hurtful and should not be tolerated under any circumstances. While we are not fully aware of all of the details, we are pleased with the administration’s swift response to the bigotry,” VP of Membership of Pepperdine University’s Black Student Association Rahje Branch wrote.

Jones wrote that the incident began with a comment that was meant to honor Black History Month.

Jones wrote that he posted a “black fact of the day” on the bulletin board in his dorm lobby, when others misinterpreted the message he was attempting to address.

He said he posted in his house Facebook group chat to clarify the fact. However, the response quickly escalated into a personal attack. A student posted the picture of “blackface.”

Jones addressed the attack on the Facebook page “Waves Against Ignorance,” also mentioning that he reported the incident to administration.

“I reported this to the proper people, but where do I go from here, seeing that they [those who posted the image] are blind that something of this magnitude is offensive?” Jones wrote on the Facebook page Waves Against Ignorance.

Others have also responded, too. Alumnus Fate Hagood IV reposted the picture and wrote regarding the incident via Facebook:

“With such a great ‘emphasis’ on multiculturalism and diversity, you’d think you could go without seeing things like this on campus,” Hagood wrote.

According to the administration’s email, “A full investigation is underway.” Feltner and Davis wrote, “Any hateful, biased or disrespectful behavior will not be tolerated at Pepperdine.”