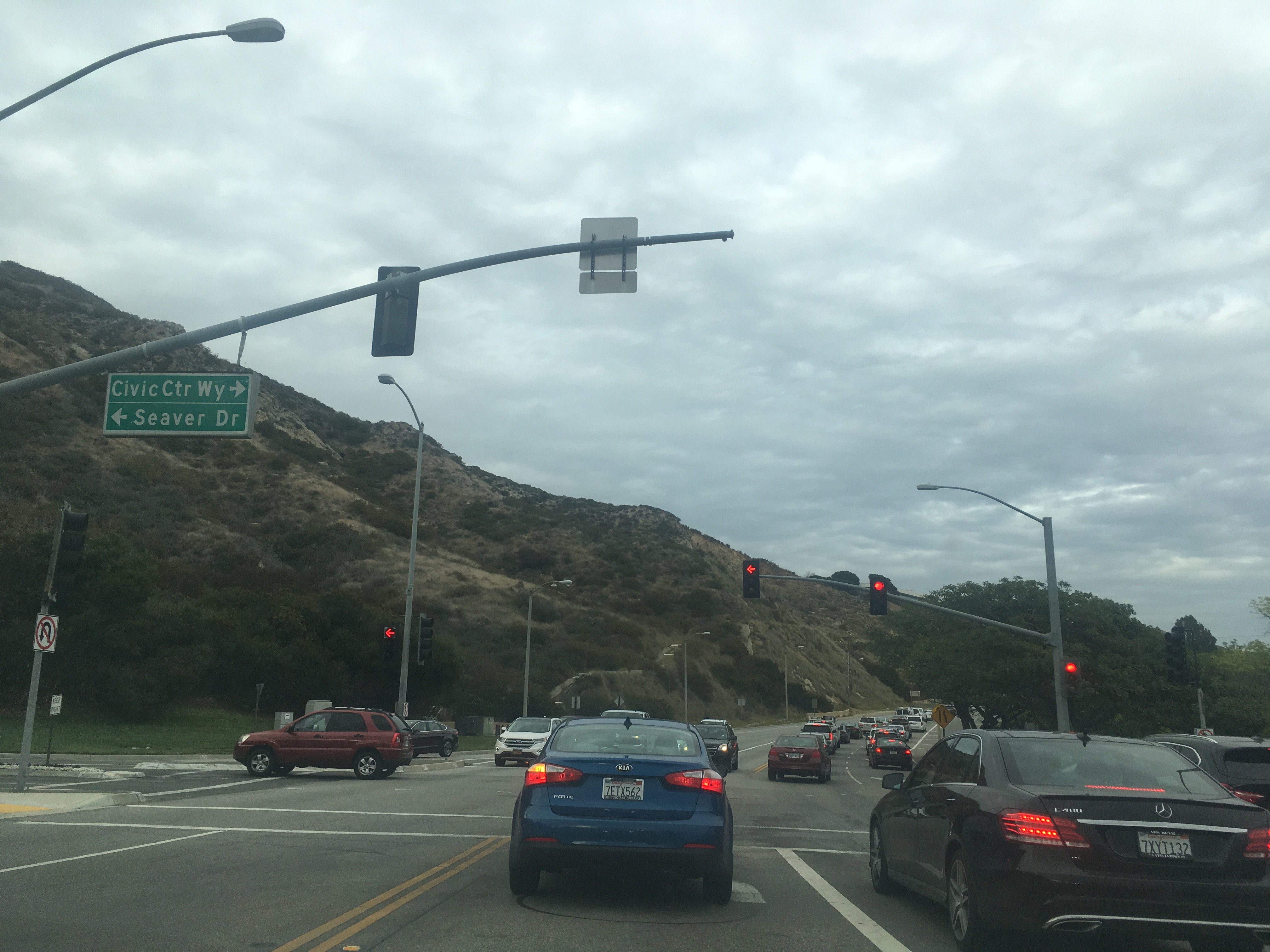 Malibu Canyon Road is a staple part of the commute from Calabasas and Ventura County to Malibu, but to anyone who’s driven through the canyon, the possibility of a car crash lurks at each twist and turn of the narrow road.

A Pepperdine student who wished to be unnamed was in a car crash in the Malibu Canyon Road tunnel Dec. 11.

The student wrote that although they slammed their brakes, their tires skidded and brought the car to swerve to hit the car on the oncoming lane that was stopped in traffic in the tunnel.

“My car was old and the collision totaled it, although the other car was a larger car and I think it fared better than mine,” the student wrote.

Between January 2016 and March 2018, there have been a total of 18 recorded crashes on Topanga Canyon Road, Mulholland Highway, Kanan Road and Malibu Canyon Road, according to various tweets from the California Highway Patrol Public Information Twitter.

There were 60 recorded crashes on Malibu Canyon Road alone in that time period, according to an email from Public Information Officer Leland Tang for the California Highway Patrol. The majority of collisions came from speeding on the canyons.

Because Malibu sees about 300,000 commuters each day, it can be hard to address the issue, according to Traffic Detective Richard Curry at the Lost Hills Sheriff’s Station. Due to the amount of commuters involved in crashes, this local speeding issue becomes a state-wide problem.

Elvin Perez, a tow truck driver at the Malibu Towing Company, said they respond to calls from the Lost Hills Sheriff’s Department on Malibu Canyon Road from its intersection with Pacific Coast Highway to Mulholland Highway. The rest is taken care of by the West Hills Towing Company. 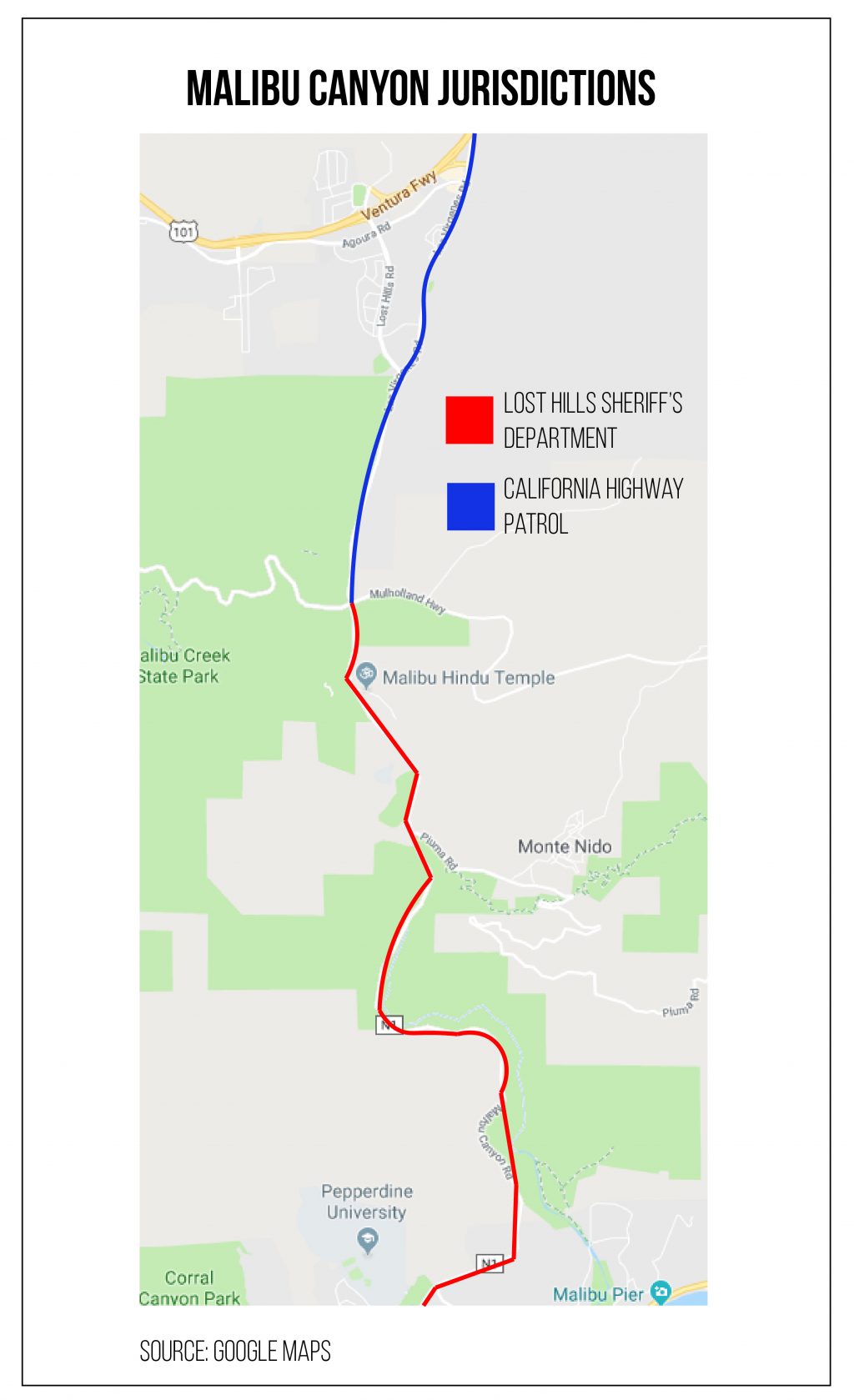 “It’s been really busy,” Perez said. “People have been falling into the canyon and crashing into each other. It can be weird how they crash. It’s sometimes because they’re distracted.”

Pete Padovano, the manager of the West Hills Towing Company said they are contracted by the California Highway Patrol (CHP) to handle calls in nearby canyons.

“We get everything on the West Valley,” Padovano said. “We’re really busy every day.”

“If one or more [parties] is connected to Pepperdine, we let the appropriate support resources know (Human Resources for an employee and the Student Care Team for a student),” Emrich wrote.

Emrich added that DPS will help out if the crashes occur near Pepperdine property.

“Occasionally, when [an] accident [has] occurred near Seaver Drive or John Tyler Drive, DPS Officers will assist with traffic control while other responders are en route,” Emrich wrote. 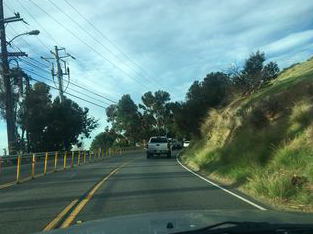 A good portion of Pepperdine commuters come from the Calabasas or Ventura County area. During housing selection, students use it sometimes as a determining factor on whether to live on or off campus.

According to a nonscientific Twitter poll, all four of the respondents answered that driving through the canyon was a factor in the on/off campus decision.

Curry said the city of Malibu sees many commuters heading to Santa Monica and other parts of Los Angeles everyday.

“The unique geographical layout of Malibu is that PCH, Malibu Canyon, Kanan Road [and] Topanga Canyon are all bypasses for the people that are trying to avoid sitting on the 101 freeway,” Curry said.

Curry said that due to the amount of commuters, it becomes a statewide issue.

“If the city of Malibu is trying to target and educate people that are residents, they can do that,” Curry said. “But when you have 20,000 residents versus 300,000 commuters that are driving through your city everyday, it’s gonna be hard to reach those 300,000 commuters unless you have message boards and other things that [promote awareness.]”

Curry said that Malibu Canyon’s status as a state highway limits what the city of Malibu can do to promote awareness among commuters. 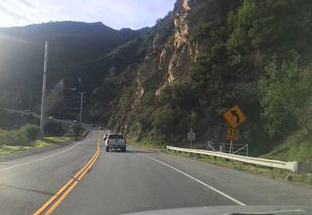 Speeding was involved in 10 percent of property-damage-only crashes and 14 percent of crashes with injuries or fatalities, according to a 2015 national survey from the Highway Loss Data Institute of the Insurance Institute for Highway for Highway Safety.

Curry said the city of Malibu sees “hundreds” of crashes a year and the main causes involve speeding.

“The main causes [for accidents] are traveling too fast, followed by either following too closely or illegal turning maneuvers,” Curry said.

Even though multiple speed limit signs are displayed along Malibu Canyon, commuters tend to disregard the signage.

Curry said the city of Malibu put a signal at Malibu Canyon Road and Civic Center Way years ago to protect people making a left-hand turn.

“The signal would stay red to stop people from turning but people would still ignore the red arrow and make the left turn anyway,” Curry said. “So it got removed.”

Curry said ultimately, crashes can’t be stopped due to the technological distractions in today’s vehicles.

“I don’t know how you can stop accidents, especially nowadays because everyone has cellphones in their cars,” Curry said. “Everyone is doing something other than driving a car.”

However, Curry said enforcement plays a big role in reducing the number of crashes.

The student wrote that even though their case is settled now, they take extra precautions on the canyon.

“I definitely drive extra carefully through the slick section of road in the tunnel and make sure I keep an even greater distance from the car ahead of me,” the student wrote.