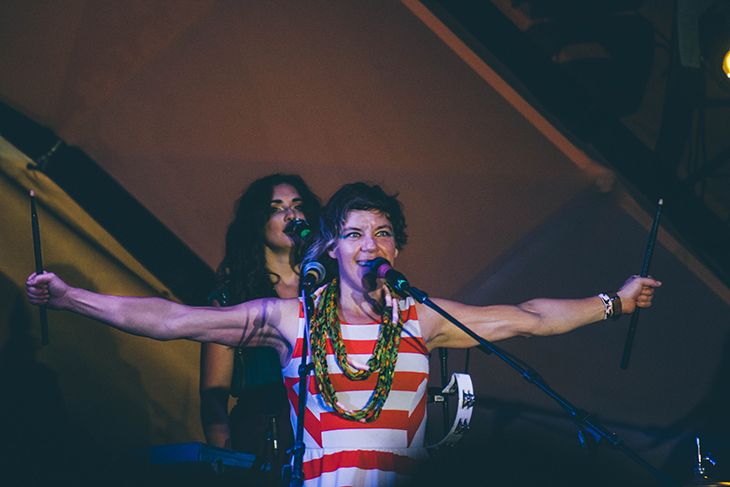 To be quite honest, we were late to Tune-Yards’ performance.
Parking in Santa Monica is a paradox in itself, and my three friends and I hustled down Broadway Street dodging skateboarders and snake proprietors to catch what we could of the show. It was the last of Santa Monica Pier’s Twilight Concert Series. Even before we reached the pier, we could hear Merrill Garbus’ husky vocals beckoning listeners to partake in the madness.

Garbus stood on the stage in a white-and-orange-striped dress with a strand of chunky green beads around her neck. Her blue eyeshadow was visible from 20 yards away as she beat wildly on the drums.

On stage with her was bassist Nate Brenner, sporting American-flag board shorts and a headband. Percussionist and vocalist Dani Markham pounded away on a drum next to Garbus.

Together since 2011 (though Garbus created Tune-Yards on her own in 2006), the band played a series of songs from their latest album, “Nikki Nack,” released in 2014, with a few artistic liberties. Armed only with drumsticks and a ukulele, Garbus created her tracks by looping beats, vocals and ukulele over each other. At some points, I thought, “Man, that’s sick.” At other points, I felt like I was in the dreaded tunnel scene from “Willy Wonka and the Chocolate Factory.”

Tune-Yards is hard to condense into one genre. With a slightly androgynous voice and semi-disobedience toward pitch and tempo, Garbus follows the beat of her own tracks. At best, her music is experimental indie-pop, and at worst, it is just plain experimental. Even so, Garbus seems to be doing just fine for herself, with close to 80,000 followers on Spotify alone.

There’s a lot that performers can learn from Garbus. She is a pillar of confidence — almost to the point that one has no idea if she is actually making a mistake. She blew kisses in between songs and skipped across the stage just for kicks and giggles. And she did everything in her own time — a song didn’t end until she strummed the last chord, no matter how long the outro seemed to be. In short, Garbus played as though she were the only audience. And she probably would have given herself a standing ovation.

Few lyrics were comprehensible, and most of them sounded like plain nonsense. At one point, Garbus just sang, “Ohhhh” for a really long time and shook her head back and forth in front of the microphone.

“Sing along, even if you don’t know the words,” Garbus said in between songs.

I’m not entirely convinced that she knew the words, or if she was even speaking words, as she spouted some gibberish into the microphone. She echoed artists such as Alt-J and Sigor Ros, who have dazzled the music industry with made-up languages, but now the whole speaking-in-tongues approach is like still using an iPhone 4. It’s time to move on.

After a few songs, vocalists Moira Smiley and Haley Dekle entered the stage. However, they did less backup singing and more interpretive dancing, giving a very convincing rendition of “The Exorcist.” Periodically throughout the concert, they breached the front of the stage, lifted up their chests to the heavens and got on their toes as though the Mothership were calling them home. Sometimes, Garbus stopped singing and joined them.

Mid-set, Garbus announced it was the band’s seventh-to-last show on their Nikki Nack tour, although even her spoken English was not exactly coherent.

She started to play “Powa,” one of the most popular songs from the 2011 album “WHOKILL.” It was one of the few songs crowd members were brave enough to sing along to; however, we braced ourselves for the dog-whistle note toward the end.

Garbus hit the note perfectly, beautifully and suspiciously, making me wonder why she preferred to sing the wrong ones for most of the set. But then again, her music clearly isn’t for everyone. It’s for her.

To call Garbus’ sound lazy or unintentional would be a mislabel; every spastic beat was in sync with the light show; every off-key note had an off-key harmony to match it. I don’t know how long it takes to come up with a mismatched set like that, but one thing is certain: All the madness was deliberate.

I watched Garbus in her own world on stage — head-banging to her own creations, dancing without consequence, singing whatever phonetics came to mind — and I couldn’t determine whether the syncopated lunacy was groundbreaking or glass-breaking.

Perhaps Garbus is crazy enough to be both at once. 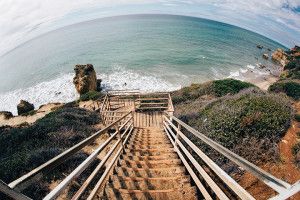 Photos by Zach LeStudents frequent Malibu Country Mart, the beach and even Santa Monica; but do many students actually spend...
Copyright 2013 Jupiter Premium Magazine Theme
Back to top