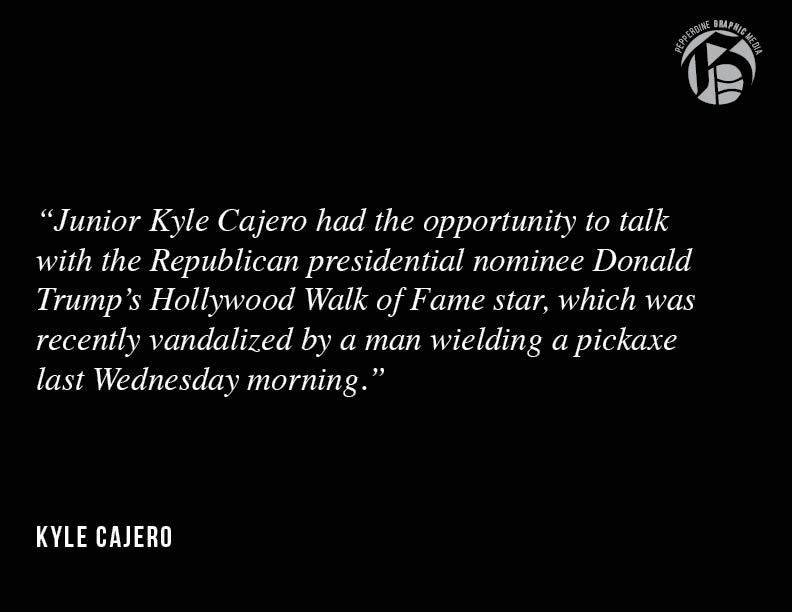 Junior Kyle Cajero had the opportunity to talk with Republican presidential nominee Donald Trump’s Hollywood Walk of Fame star, which was vandalized by a man wielding a pickaxe last Wednesday morning.

Kyle Cajero: How are you doing?

Donald Trump Star: Physically, I feel a lot better. But I still get really vivid flashbacks of the incident whenever someone stomps near me.

K: Would you mind describing the incident?

DTS: It happened around 5 a.m. on a Wednesday. So like, nobody was around to hear me scream when this James Lambert Otis guy approached me with a sledgehammer and beat the bejesus out of me. Then he went full gold-digging prospector on me and hacked me with a pick-axe. That’s when I started wailing — and I mean, like, a chick in a horror film wailing — for hours until some gold-painted dude pointed out that I was missing my emblem and letters. That’s when it really hit me that I was ruined.

What surprised me the most was this guy’s nerve. I heard afterward how he was an heir to some elevator company and how he might get imprisoned for three years for attacking me. The man deserves 30 for being a bored rich person who attacks innocent stars, but I’m not on the jury, so who am I to say?

K: What does rehab look like for a Hollywood Walk of Fame Star?

DTS: Thank God it’s nothing like rehab for actual Hollywood stars, if you know what I’m saying. But it’s actually a pretty painless process. A few days ago, Top End Constructors partitioned me off from my neighbors, bathed me and gave me a facial. Except it’s with concrete and paint, but hey: It’s still not a bad gig.

K: At least you’re optimistic about your future. Speaking of the future, care to comment on the election?

DTS: I can’t wait for it to end, man. I’ve been through hell and back over the past few weeks. It seems like The Huffington Post writes a new article about me every week. First, there was the swastika, then there was the mute sign — which, I’ll admit, was pretty clever — and then someone built a miniature wall around me. At first, I thought that was kind of funny, but then I got really lonely isolated behind that wall.

And of course, there’s always some college kid who gets totally hammered and pees on me for their snap story. They’re almost always dehydrated, which is super gross.

K: Some people might argue that defacing you is covered under their First Amendment rights. If you had the chance to talk to people who hold this viewpoint, what would you say to them?

DTS: [Cackles] Man, I’d have way too much to say. First of all, they’d have to answer for the past two years of abuse. Yeah, say what you want about The Donald or whatever, but what do I have to do with it? I’m just a star. I don’t see anyone defacing [Hillary] Clinton, [Jill] Stein or [Gary] Johnson stuff in public with tools.

And it’s not like the Donald is the only bad person on [the Walk of Fame]. Look, I’m not condoning Donald’s behavior or nothing, but I’m sure you can find dirt on anyone on that walk of fame. Cosby’s still there. A bunch of anti-semitic, racist guys from the golden age of Hollywood are still there. Heck, Absolut Vodka has a star and you never see people ruin it, even though over ten thousand people have died from DUI-related incidents in the past 15 years.

But I wanna know this: I wonder why someone would say defacing me isn’t as bad as whatever people do at Trump rallies. Like, the Hillary crowd is all about the “when they go low, we go high” schtick but at the same time, there are the anti-Trump people who don’t take the high road and jump me with construction materials. What happened to “do unto others” and all that jazz? That’s still a thing, right?

K: Hollywood is a very liberal place. Do you think you’ll side with your peers and vote for Hillary, even after this incident?

K: Interesting choice. Best of luck on your recovery.