Transfer Students Weigh in on Experience 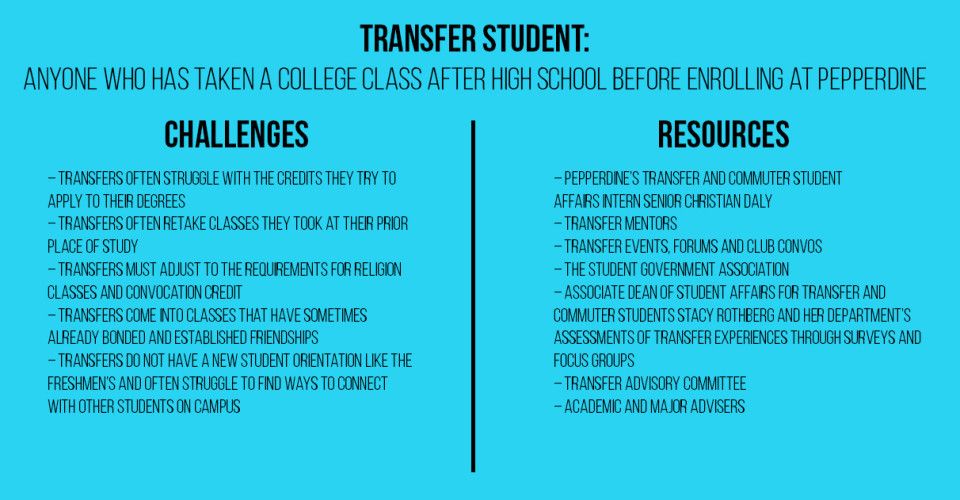 Scanning the Waves baseball stadium looking for the student section, junior transfer student Zellie Short said she was quite surprised. Coming from the SEC school Ole Miss where uproarious tailgates and loud cheering were common, Short said she was struck by the lack of student body coming to support the games.

“It was just a completely different atmosphere,” she said.

This atmosphere has largely to do with campus population, as there were approximately 20,000 undergraduates at Ole Miss compared to roughly 3,500 at Pepperdine, she said. Both of the atmospheres are great in their own way, and overall Short said she feels incredibly grateful to be here at Pepperdine.

To be considered a transfer student, one must have simply taken any courses after graduating high school, prior to enrolling at Pepperdine. Transfer students are required to submit their application through the Common Application, which becomes available each year on Aug. 1. Such students submit official high school and college transcripts, academic recommendations, SAT or ACT scores, and a Pepperdine-specific essay in addition to the common application, according to the University website.

In terms of academic transfer credits, the University works in conjunction with a variety of community colleges, including Santa Monica College, Fresno City College and Pierce College. These agreements allow certain General Education requirements to transfer to Seaver College according to the Articulation Agreements section of the University website which includes a full list of agreements.

Pepperdine has a specific Transfer and Commuter Student Affairs position to help with all aspects of being a transfer student. Christian Daly, a second year student at the School of Public Policy is the first Transfer and Commuter Student Affairs intern, and his role is to be a resource for all transfer students. Daly confirmed the sentiment expressed by numerous students that the Pepperdine community can often feel exclusive to transfers.

“In general, with Pepperdine you feel a sense of a small close-knit school, which has its benefits, but when you’re coming in as the new kid on the block, it can be a little difficult,” Daly said.

The classes of students have often already bonded for a year or two when a transfer student joins the campus, and it is easy to feel isolated, Daly said. Academically, transfers struggle with the credits they are trying to apply to their degrees and often retake classes they took at their prior place of study, Daly said.

As a Christian university, students are required to take nine units of Christianity and Culture and 14 Convocation credits, requirements that aren’t present at all other universities, according to the Seaver General Education Program. This can present a problem for some students and prove to be academically disruptive for some, Daly said.

To mitigate some of these more unpleasant circumstances, transfer mentors and transfer events are available to students. Transfer mentors are transfer students who have chosen leadership roles to guide new students in their adjustment oftentimes through organizing events to bring all the students together. Daly encouraged inclusion of these students into the community and the importance of acceptance.

“It may be a natural response to keep a new student at arm’s length, but we should not have this approach. Transfer students made a decision in the middle of their collegiate journey to come to Pepperdine,” he said. “In all, we should celebrate them for their choice to continue their journey with us here at Pepperdine and embrace them into our community.”

The Student Government Association held a forum on Feb. 23 for all transfer students to express their thoughts about the transition to campus. There were approximately 20 students in attendance to express concerns and suggestions to improve their experience, according to SGA President Ima Idahosa.

“Ultimately, we want every student that transfers to Pepperdine to undergo a smooth, enjoyable transition and enjoy their time here,” Idahosa wrote in an email.

The goal of SGA is to make sure that students’ voices are heard, and improving the experiences of the transfer and commuter students is a priority, Idahosa wrote. Since the forum, SGA has met with Senior Director of Student Administrative Services Andrea Harris, and they are collectively striving to achieve greater cohesion among the departments that deal with transfer students.

Senior Christine Dailey transferred to Pepperdine in fall 2013 from the University of Utah and attributed the ease of her transition to living in freshman housing. Living among freshmen who were excited and ready to plug into the community motivated her to do the same.

Dailey said she had to fill out paperwork for a few of the classes she wanted to transfer, and ended up with 15 units that did not apply. The paperwork process required comparing the syllabi of the two classes and deciding their relative level of difficulty, and then deciding if the credit would count, she said.

In terms of Pepperdine-specific classes, Dailey said she did not find the religion requirement to be a burden, but rather found it very interesting and accessible because of her personal dedication to faith.

“Humanities was more of a burden to me than the religion classes were,” she said.

She said she viewed the Convo requirement as another way to get involved as an incoming transfer, not as a burden. Dailey said she would prefer a more inclusive and exciting New Student Orientation for transfers, and suggested an optional inclusion into the freshman NSO to avoid isolating the transfers. She said successful transferring is about the personality of the student and the willingness to jump into the community.

Associate Dean of Student Affairs for Transfer and Commuter Students Stacy Rothberg said her role includes providing support for these students and their needs. Her department assesses the experience of transfer students through surveys and focus groups, she said.

“We have some fantastic transfer students, and it’s just helping them find their place at Pepperdine,” she said.

In addition to these assessments, her department also has a Transfer Advisory Committee to help improve the transfer experience. This committee is comprised of representatives from admissions, housing, counseling, academic advising and the International Student Services Office in addition to Rothberg and Daly. The committee meets monthly and strives to gather a more comprehensive look at how to better support transfer students, she said.

Socially, Rothberg agreed the transfer process can oftentimes be lonely and that sometimes developing relationships takes time. Additionally, the credit process can be quite frustrating for students, although academic and major advisers are excellent resources for getting those problems resolved according to Rothberg.

“The biggest contrast in transfer students’ experience typically depends upon which semester they transferred into Pepperdine; the spring transfers have more challenges since they are entering during the middle of an academic year,” Rothberg said.

Junior Marin Longfellow transferred from Southern Methodist University in Dallas, Texas in spring 2014, and 10 of her 14 credits transferred in. Longfellow had been accepted into Pepperdine her senior year of high school, so she said her re-application process was easy. She participated in Transfer New Student Orientation and said she was not incredibly impressed by it, as it seemed to be kind of random excursions with a very small group of people.

“It’s not like NSO where you come and feel super welcomed and everything; you feel like an outsider,” Longfellow said.

Her social transition, however, was relatively positive, she said, as she lived in Darnell with the other freshman, whereas other transfers were isolated in Krown Alpha together. She said her experience was unique, as she bonded with the freshman, whereas the transfers seemed to bond with one another.

“We are a community that cares and will help transfers with their transition,” Rothberg said. 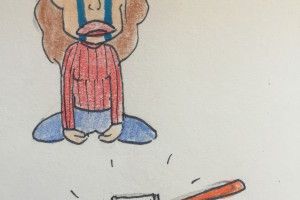 Art by Peau PorotesanoThere are some moments in life you can’t change; like the time I dropped my toothbrush on the floor...
Copyright 2013 Jupiter Premium Magazine Theme
Back to top