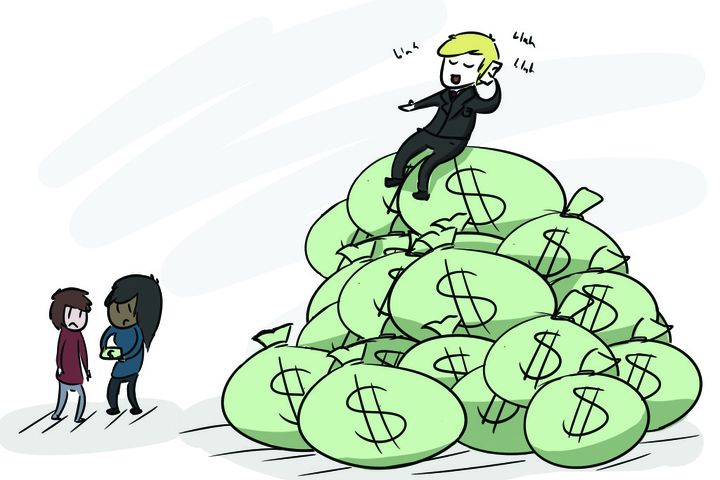 The Malibu Public Library: There is a man sitting in the row across from me, steering his iPad in a furious melodic beat, his brain meticulously calculating which direction he should “swipe” on his $500 dollar electronic tablet to increase the possibility that he may find his next Tinder soulmate. His hair is subject to half a pint of Garnier Fructis hair gel, and slick penny loafers cushion his plump feet. A hundred yards away, a woman is curled up on the floor, hiding within the shadows of shelves promoting Gillian Flynn’s “Gone Girl,” conversing fervidly with her sole friend, a golden retriever. Dust masks her sun-labored skin, her emaciated limbs drown under an oversized coat decorated with frayed edges and moth-sized holes.

Even in one of the most affluent areas in the world, a dichotomy of rich and poor continues to haunt each crevice of life. Today, the top 1 percent of the population owns half of the world’s wealth. The rich grow richer, the poor poorer.

“Taken together, the bottom half of the global population own less than 1 percent of total wealth,” according to an October 2014 article published by the Guardian. In sharp contrast, the richest decile hold 87 percent of the world’s wealth, and the top percentile alone account for 48.2 percent of global assets.”

The Credit Suisse Global Wealth reported earlier this week “a person needs just $3,650 — including the value of equity in their home — to be among the wealthiest half of world citizens. However, more than $77,000 is required to be a member of the top 10 percent of global wealth holders, and $798,000 to belong to the top 1 percent” according to a Oct. 2014 issue of the Guardian.

Although total global wealth has more than doubled since 2000, “wealth inequality has risen in 23 countries since then.”

This spike in wealth disparity is evident globally, and the United States leads the way with a “rise of 8.9 trillion U.S. dollars for the 12 months ending mid-2014. The United States has recovered in a single year all the assets lost during one of the most serious financial setbacks in history,” according to The Guardian.

Even so, homelessness and poverty relentlessly tarnish streets across the nation. What is contributing to this increasing opposition of wealth following the world’s economic recession? Why the obsession to attain material goods while our neighboring children are denied the opportunity for an education, and the sick are denied medical care due to lack of finances?

It is sometimes difficult to disengage from the confines of Pepperdine’s bubble; sleek Rolls Royce convertibles and epic oceanfront mansions constantly seduce our eyes. Of course, leading an opulent lifestyle is far from sinister. Many times, these tokens of wealth are procured by arduous, fatiguing work. Even more often, those who have the fortune to rest at the top of the income ladder dedicate incalculable amounts of time and money to philanthropic organizations.

That said, the magnitude of financial inequality and expanding impoverishment cannot be ignored. Poverty is a reflection of the world’s sickness: Each day we look out into the world’s mirrors and can decide how to proceed. Will we be guided by a soul of value, honor and love, or one by greed, hate and deceit?