‘The Stories That We Tell’ Panel Encourages Media Literacy 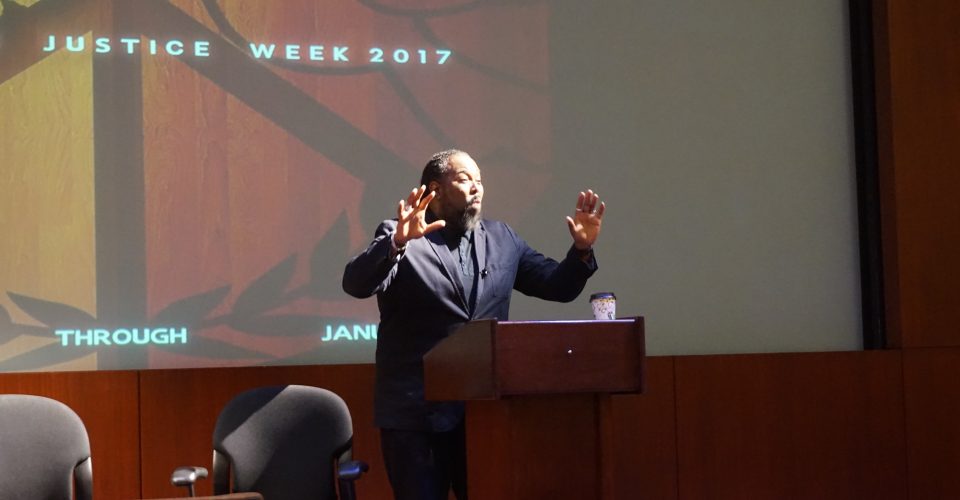 Students gathered in Elkins Auditorium on Wednesday, Jan. 18, for the convocation event “The Stories That We Tell” — a panel discussion with Associate Chaplain Eric Wilson, Professor Roslyn Satchel and Associate Dean of Student Affairs for Diversity and Inclusion David Humphrey. The event was part of Peace, Hope and Justice Week, put on by Intercultural Affairs and the Volunteer Center. The panelists discussed the importance of story and critical thinking when it comes to stories being told from a position of power, specifically media and entertainment with regard to race.

Associate Chaplain Eric Wilson opened the event with an introduction to the role of story in determining a society’s values and people’s behavior. Wilson said that story can be used as a tool for oppression, or for peace, hope and justice. He used the formula of a hero’s character — someone with the will, skill and environment to succeed — to lead up to the question: “Are you the main character of your own story?”

Wilson explored the idea of being the main character in one’s own stories by examining the historical and near-mythical story of Christopher Columbus and the message of superiority and manifest destiny. The colonizers and conquerors have become the main characters of this story, leading marginalized individuals whose cultures were colonized, conquered and destroyed, to be forgotten.

“Our future will be determined by what you have forgotten,” Wilson said, addressing the importance of a critical, holistic view of historical events that shape our culture.

The panel opened with Professor Roslyn Satchel sharing her family’s tradition of telling the stories of the Bible. Satchel’s role, as the youngest child, was to listen, she said. Her father was always the one in charge of the story, and he determined the message that the children should receive from it. Satchel related this to her study of storytelling in film and television.

“The storyteller has a position of power,” she said.

White males dominate the film industry, and 10 of the top 20 films viewed worldwide were directed by only three White men, according to Satchel’s research. She recently published a book called “What Movies Teach About Race,” breaking down racial representation in those top 20 films.

Satchel encouraged students in the audience to ask who benefits from the message in a particular story, and why they are telling it. The narrative often serves to justify the system, she said. “Question it. Challenge it.”

First-year student Payton Silket said this call to action had the most impact on him. “I think people really do want to see change but having that call to be the change and seek out the change is really critical,” he said. “Someone coming here might have had the tools and the critical thinking, but never been called to do it.”

In an interview after the event, Satchel gave some advice as to how students can diversify their media intake and pay more attention to stories we rarely hear.

“Move outside of big budget studio films from Hollywood,” she said. “If you’re actively looking for films that are more affirming, present more counter-narratives, may present marginalized communities in a positive light, then I think we have to move outside the power structure that is responsible for the othering.” Satchel said that viewing independent films and alternative media is a better way to be conscious of the stories we consume.

David Humphrey talked about the lack of critical consciousness in the way we consume media, and the way language constructs the stories we tell. He said the language we use and the media we consume always have an underlying message of who in the society is of quality.

In stories about good and evil, for example, the word “light” is often used to denote the good, and the word “dark” commonly refers to evil. While on the surface this may seem harmless, Humphrey said that this language has an underlying message that people with light skin are good and people with dark skin are evil.

“If you are to be the generation to bring mass change to our society, you need to question the stories,” Humphrey said.

The panelists encouraged students to critically analyze media, to look for the underlying message that stories try to teach us. Satchel recommended the Media Deconstruction Framework as a resource for media literacy.

Students responded positively to the event. Akerra Tarver, a junior, said, “It was a really good dynamic conversation looking at a lot of different sides. We had the historical context, a media context, and a personal context, looking at who controls the narrative and how that narrative controls and reflects onto their various emphases.”

Both Tarver and Silket wanted to see a more diverse group of students and panelists represented in order to reach more people. “There’s more than just Black and White on this campus,” Tarver said.

The panel furthered the ongoing conversation about race at Pepperdine. Students were encouraged to think more critically about storytelling in media, and the way that stories shape our society. 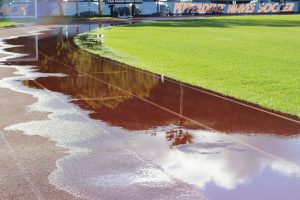 Photos by Terra Atwood Pepperdine students and faculty are heading back to school after classes were cancelled and offices...
Copyright 2013 Jupiter Premium Magazine Theme
Back to top