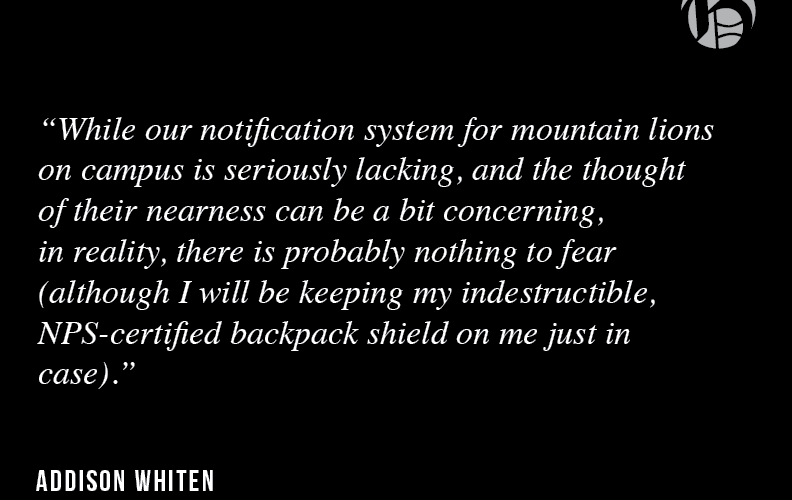 Being tucked away in the Santa Monica Mountains gives Pepperdine its characteristic sweeping ocean views and adds a nice element of privacy and security on campus.

As we enjoy our mountainous home and bask in the California sunlight, it can be easy to forget about some of our furry neighbors lurking nearby. While seeing deer by the CCB or a bunny on Lower Dorm Road is a fun surprise, the mountain lions residing in these hills are a scary reality we have to deal with.

The Public Relations Office has sent four emails since the start of the semester informing students about mountain lions being spotted on or near campus. It’s nice to be aware of a mountain lion’s proximity to campus for safety reasons, but unfortunately, the quickest time between one of these emails being sent and the sighting was 12 hours.

For example, DPS spotted a mountain lion near campus at 8:15 p.m., Sept. 30, but the Pepperdine community received the email about this at 5:07 p.m., the next day. That’s a long time to be unaware there was a mountain lion in the vicinity, especially given the email’s stated reasoning for being sent in the first place.

“Pepperdine officials share confirmed mountain lion sightings near the Malibu campus to ensure the University community is informed of, but not alarmed by, the wildlife with whom we share the Santa Monica Mountains,” the Public Relations Office wrote in the Oct. 1 email.

If the goal of the emails telling students about mountain lion sightings is to inform them about the presence of wildlife, they need to be sent in a much more timely manner.

Even though the thought of mountain lions potentially roaming campus and waiting to attack as you walk home from the HAWC at midnight is scary, in reality, it’s unlikely.

There have been only 11 verified instances of mountain lions attacking humans in the state since 2000, according to the California Department of Fish and Wildlife. The CDFW defines a mountain lion attack as “an incident resulting in direct physical contact between a human and a mountain lion resulting in physical injury or death to the person.”

Of those 11 verified attacks, only one occurred in the Santa Monica Mountains, giving us pretty good odds of never having a dangerous encounter with our local felines.

While chances are slim you will ever find yourself face-to-face with a hungry mountain lion on campus, if you happen to be the lucky duck who finds themselves in that situation, there are things you can do to get away safely.

The National Park Service advises staying calm, not approaching or running from a mountain lion and remaining upright. When a mountain lion begins moving toward you, the NPS recommends making yourself appear as intimidating as possible, and if that doesn’t deter it, the NPS says to try throwing things at the cat. If the animal still advances toward you to attack, you must use NPS’ most succinct survival advice yet: “Fight back!”

Luckily for us here at Pepperdine, NPS says you can use a backpack as a shield against an attacking mountain lion.

While our notification system for mountain lions on campus is seriously lacking, and the thought of their nearness can be a bit concerning, in reality, there is probably nothing to fear (although I will be keeping my indestructible, NPS-certified backpack shield on me just in case). 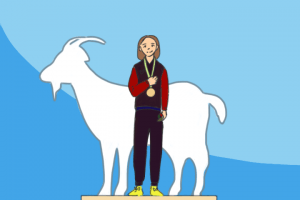 Art by Leah BaeYou hear it at every professional swim meet. Over the sound of a starting gun and the splash of water is a whisper...
Copyright 2013 Jupiter Premium Magazine Theme
Back to top