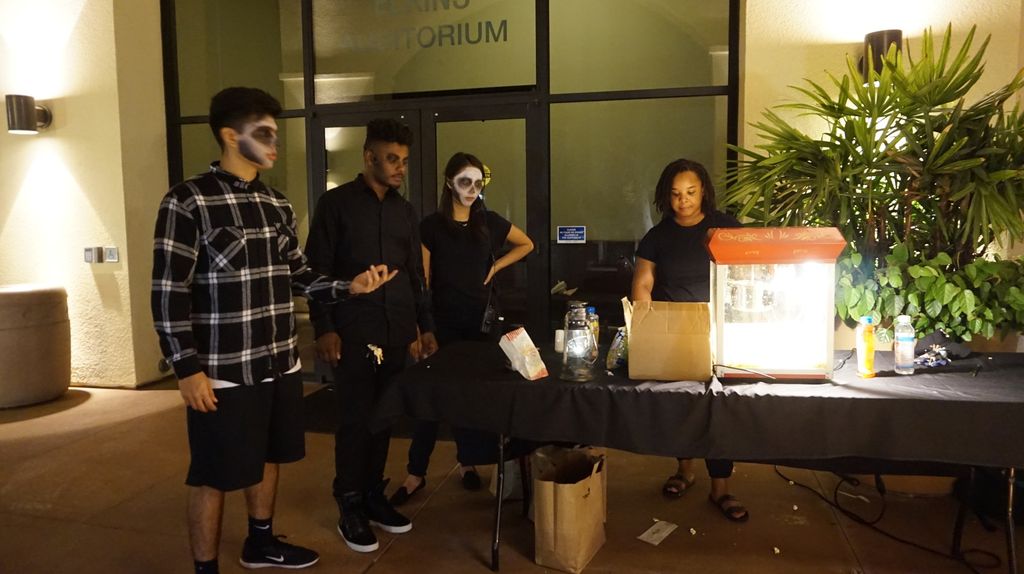 The Board’s monthly movie event showed “Lights Out” on Friday, Oct. 28, keeping with the Halloween season.

“Lights Out,” directed by David Sandberg and released in July is based on a short film with the same title, which Sandberg directed and released in 2013. The film tells the story of a family haunted by a vengeful spirit that only appears in the dark and under a black light.

Elkins Auditorium was decorated to resemble a haunted house, with a fog machine outside the entrance, black curtains lining the doorways, and black lights inside. Board members, with their faces painted to look like skeletons, gave out free popcorn and guided students inside by lantern light. About 80 students attended the event.

Senior Justin Wirawan said the Board wanted to create a whole experience for viewers.

“We tried to go with the Halloween theme, and we wanted to create a haunted house inside Elkins so they could have a spooky atmosphere while they watch,” senior Justin Wirawan said. “[We] watched a couple of movies just to see what kind of reaction we would get, and this was the most fun for a group because everyone is playing off each others’ reactions … It was much more of a social movie than the other ones,” Wirawan said.

Junior Michaela Meyer was one student frightened by the setup and the movie. “It made me jump when I first walked in; they scared me,” she said. “There’s community in watching a horror film. Everyone freaks out and overreacts. I actually screamed this time because other people screaming makes me want to scream … If I had watched it at home, I wouldn’t have screamed.”

Last month, the Board showed “Jaws” at the pool. Junior Megan Chou said this event was better.

“The ‘Jaws’ event was outside in the pool, and you’re just sitting there in the cold. I liked this one a lot,” Chou said. “The screen is a lot better here, the quality.”

The Board said they try to improve the movie experience each month, an effort that began last year.

“Starting last year we’ve been a lot more mindful of making the movie come alive outside of the screen,” Wirawan said. “Movies really bring you in, so we wanted to make that a very holistic experience so that you are transported into that world, not just watching it on a screen,” he said. Wirawan explained how the Board has tried to improve the experience every month.

The next movie is “Fantastic Mr. Fox,” a 2009 film directed by Wes Anderson, which will be shown on the second floor of the HAWC on Nov. 19. The event will have a picnic-style setup and Thanksgiving foods.