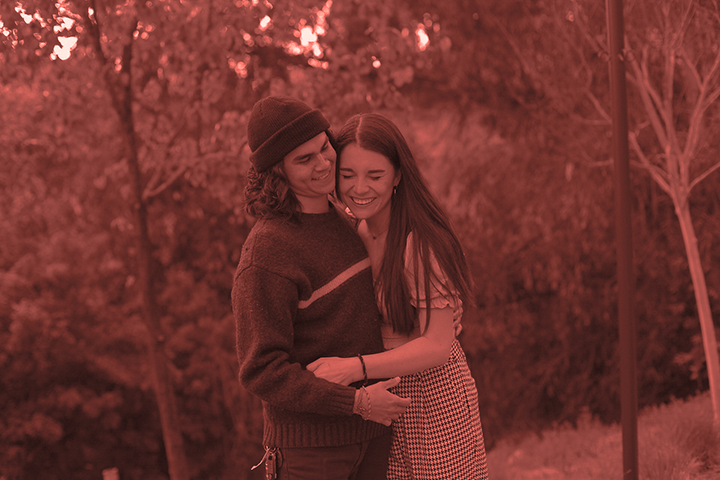 A romantic relationship that develops between best friends — while cliche — is the ideal storybook ending. It’s the kind of love that builds, like the bridge of a song with unexpected vocals and chords, changing the rhythm for the better.

But for seniors Sydney Griffith and Brandon Rudolph, the idea of being anything more than acquaintances was highly unlikely their freshman year, especially considering how Rudolph disliked Fleetwood Mac, one of Griffith’s favorite bands.

“Woah. He looks so weird,” Griffith said after seeing a picture of Rudolph.

Her resident advisor had just shared with her how Rudolph had commented that Griffith’s eyes were beautiful after seeing a picture of her. Griffith’s and Rudolph’s RAs were in a relationship, and Rudolph hung out in Griffith’s freshman dorm quite frequently.

Studying together in Buenos Aires a year later transformed their dynamic.

They said they became best friends while having every class together during the abroad program, but their relationship was undeniably more. When traveling around Peru and Columbia in a small group of four during travel break, Griffith said she and Rudolph were in their own world.

“You can throw your legs on top of mine to make it more comfy,” Rudolph said to Griffith on a bus during the trip.

Beginning with small nudges while walking in Peru and invitations to sit closer, the two ended up drinking coffee across from each other at a little cafe called Amor Perfecto in Columbia. It was Rudolph’s birthday, but also their first date.

“This was someone who meant a lot to me,” Griffith said. “This was going to be a really important relationship even though I was pretty oblivious to the whole romantic part at the time.”

Now two years later and back in Malibu, the couple still finds their connection as deep as before. It’s the simplicity of their relationship — the fact that they are best friends — that defines it.

“Let’s just watch ‘Gilmore Girls’ and drink hot chocolate,” Rudolph said. “That’s what a lot of our days have become, and it somehow feels special every day we do it.”

Griffith and Rudolph said their cultural identities have become their key to learning each other’s pasts and deepening their bond.

“I feel like that’s something else that also is very fun about our relationship is getting to see those cultural backgrounds and the roles they had on our upbringing,” Rudolph said. “Because there’s definitely so many years I didn’t know Syd before I met her, so I think seeing that, you know, cultural background — how it influenced her now. It’s just good that we both get to be a part of that.”

A shared desire to learn about social issues connects them further. Griffith said it’s a personal journey, and they hold each other accountable to it.

Sharing culture, pursuing social awareness, watching “Gilmore Girls” and painting their nails together are distinctions that make Griffith and Rudolph who they are. Their love thrives with these small, intentional actions. It is seen in a “perfect day” Rudolph described — when they cooked a replica of The Cheesecake Factory’s four cheese pasta and vibed outside to “It’s Been a Long, Long Time,” just like Captain America and longtime love Peggy Carter in “Avengers: Endgame.”