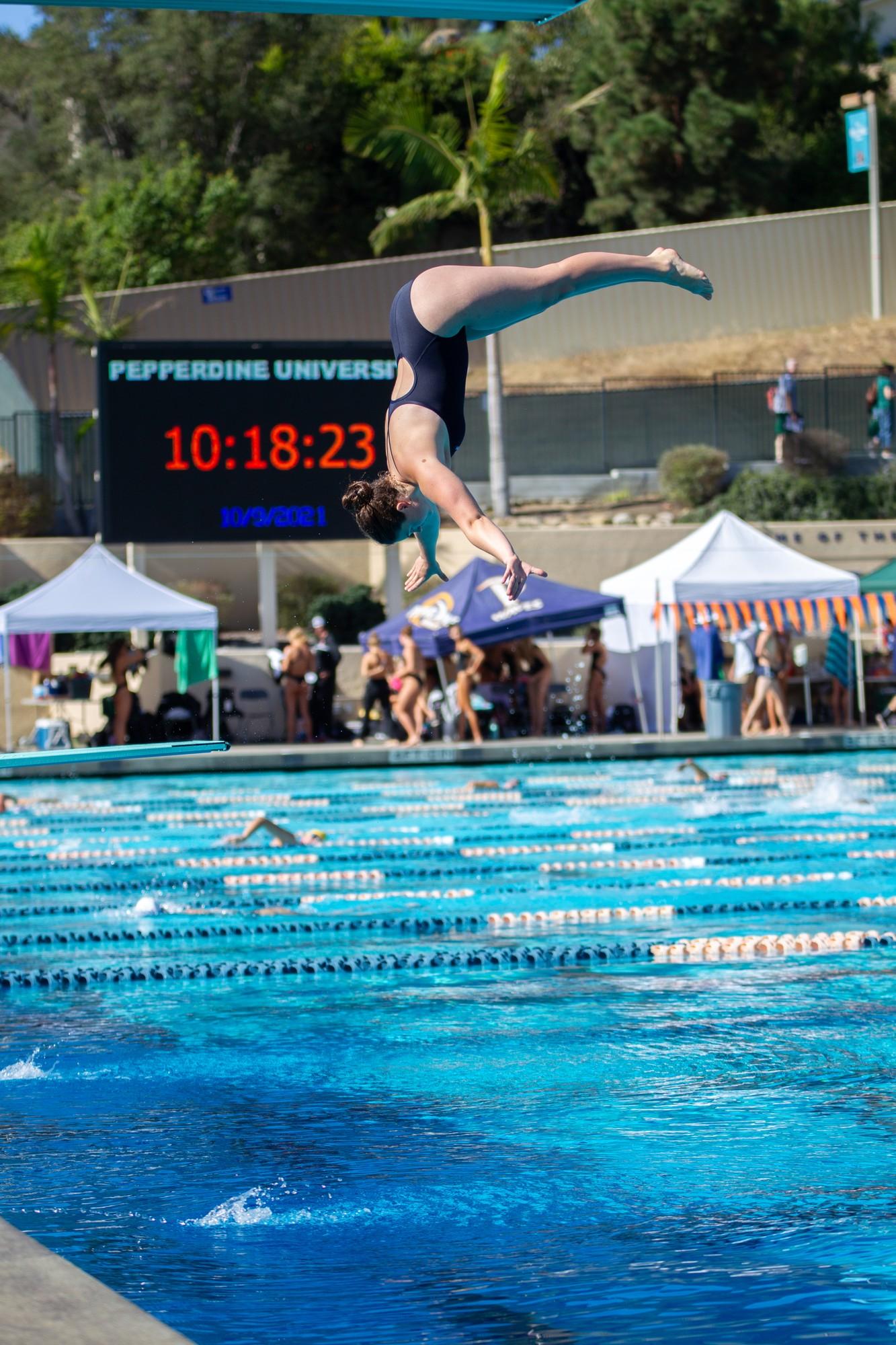 Paulina Holmberg competes in the 3-meter dive at the Rodionoff Invitational on Saturday, Oct. 9. Holmberg was the top diver for the Waves, taking third place. Photos by Landry Hendrick

It’s been a shorter offseason than usual for the Pepperdine Women’s Swim and Dive team, who concluded their 2020-21 season in April and began the 2021-22 season on Thursday, Oct. 7, against San Diego State.

Coming off a year where the program found success in many ways, finishing second at the Pacific Collegiate Swim and Dive Conference Championships with five individual champions and four first-place relays, the team looks to take the next step.

“The team’s primary motivation this season is to win the PCSC Conference Championships in February,” senior Lindsey Marian said. “We have finished second for the last three years, and we truly believe this is our time to shine.”

The Waves dropped the opening meet to San Diego State 81-65, but came back with a strong performance over the weekend, placing first at the two-day Rodionoff Invitational on Oct. 8-9.

The Waves welcome back an athletically and academically decorated senior class, who have nearly done it all. School records, individual championships, all-conference selections — the list goes on. The last challenge for this group is capturing the PCSC Conference Championship, which eluded them by a mere four points last season.

Seniors face the call to be top performers, as well as leaders, particularly for the less experienced athletes, and if any group can provide those elements for their team, it’s this one. Second-year Head Coach Ellie Monobe, who was named Swim Coach of the Meet at the PCSC Championships last season, said she has high hopes and expectations for the senior class.

“I’m very excited that this is the group of seniors this year,” Monobe said. “They understood coming in that we have a large group of freshmen and underclassmen, and they are ready for the challenge. We’re definitely looking forward to them taking charge in the pool, but outside of the pool, they’ve very much been setting the tone in character and representing our team values well.”

The seniors put on strong performances to start the year. Paulina Holmberg led the Waves divers, finishing third overall at the Rodionoff Invitational with a final score of 248.45. Emily Morton finished second in the 400-yard individual medley with a time of 4:37.18 and third in the 100-yard backstroke finishing at 59.50.

These opening meets were the new recruiting class’ first appearance as Waves. This class is Monobe’s first group of recruits since coaching at Pepperdine. It consists of nine swimmers and one diver, nine of whom are freshman with the other a graduate transfer.

Among this class are several sprinters, as well as utility swimmers, who can participate in several events, giving the team flexibility.

“It’s really hard when you don’t get official visits and have never really been on campus until you’re here when school starts, but they’ve really jumped in with both feet,” Monobe said. “It feels like they’ve been here for a season when it’s only been a month.”

The freshman Waves started the season strong. Lexi Martin finished fourth overall among the divers in the meet against San Diego State, as well as at the Rodionoff Invitational.

Additionally, at the Rodionoff Invitational, Lexie Deitemeyer took second in the 100-yard butterfly, finishing at 59.03, and Lindsay Hemming came in fourth in the 500-yard freestyle with a time of 5:18.14.

In addition to the freshmen, who have to find their footing at Pepperdine, there’s been an adjustment period for the returning members leading up to the start of the season. With policies in place to limit the spread of COVID-19, the lead-up to the season was a different experience than others before when it comes to balancing athletics and academics.

“It is definitely an adjustment, but one I am happy to make,” senior Sophia Anderson said. “We are very busy all the time, and not being able to eat in the classroom has definitely been challenging.”

Despite the circumstances, Anderson said, when it comes to training, the team has prepared similarly to other seasons and is starting to ramp up the intensity as they enter weeks five and six.

“The team is super excited about starting the season,” Marian said. “We have been putting in a bunch of work in the pool and in the weight room, and we are excited to get out and race.”

For their upcoming meets, the Waves will travel to Northern California for an all-important matchup with conference rival Cal State East Bay on Friday, Oct. 15, as well as UC Davis the following day.