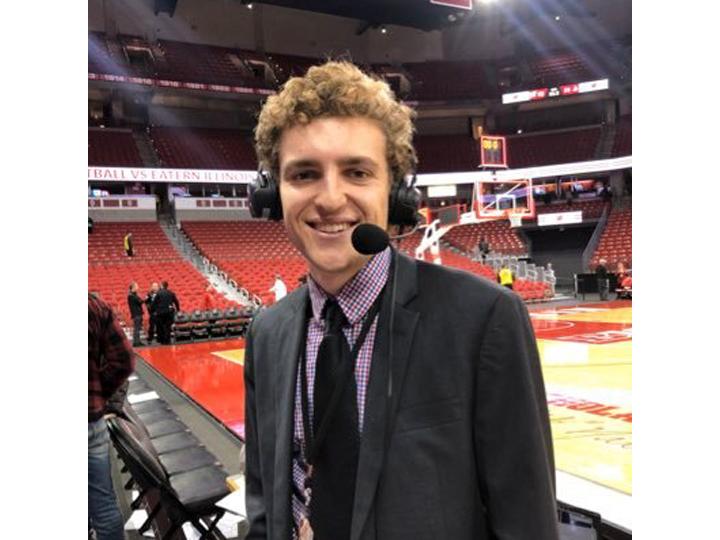 Wisconsinite Asher Low broadcasts a men’s basketball game at the Kohl Center in Madison, Wis., in January 2020. Low has been a fan of Pepperdine Basketball since he was a kid despite never attending Pepperdine. Photo courtesy of Asher Low

The Pepperdine Men’s Basketball team is one of the most popular sporting events to attend on campus. According to a report from The NCAA attendance report, the team averaged 1,390 fans during the 2019-2020 season. With no in-person attendance for games this year, fandom for the team has transitioned to social media.

The team has strong supporters among the students and faculty of Pepperdine, but some of its most dedicated fans are three people who have used Twitter as a way to express their fandom for the team: Mackenzie Mazen, David Peterson and Asher Low.

“The way that sports can be used for human connection has allowed me to meet some of the most incredible people,” Peterson, an alumnus of Pepperdine from 2019, said. “Getting to know people like Mackenzie and Asher has given me a sense of community with this fandom.”

Mazen is a Graduate Assistant at the Pepperdine Volunteer Center and is obtaining her MBA in Leadership and Management from the Pepperdine Graziadio Business School. She is one of the team’s biggest supporters despite not being a fan of many other sports.

“My friend was the manager for the basketball team so I initially went to support her and basketball is a simple sport to understand,” Mazen said. “This year I transitioned to Twitter as we were not allowed to attend games and it has been a really fun time to still support the team.”

Mazen said she was excited by how well the team did this year, and she believes Twitter has created a community of fans despite no in-person attendance.

“There were about five people who were consistently there who had a fondness for this team and we were talking in a way that we probably would not be able to if we were at the Fieldhouse,” Mazen said. “I think there has been an increase of connections with superfans this season and the enthusiasm was awesome.”

Peterson said he has also been impressed with the improvement of the program since his freshman year in 2015.

“One of the most enjoyable things that I have experienced is seeing how the players have developed and grown, particularly when the program was at a low point when I first came here,” Peterson said. “It is cool to see that after all the hard work that has been put into the program by the players and coaches that they were able to win a championship this year.”

Mazen’s Twitter support has garnered attention from many of the team’s players throughout the season.

“President Jim Gash let me come to the last home game at Firestone Fieldhouse after I emailed him about it,” Mazen said. “He talked with Steve Potts, the Athletic Director, and everyone was on board with me coming, which was exciting.”

While Mazen is not a follower of sports outside of Pepperdine Men’s Basketball, Peterson is a fan of all things sports, particularly in collegiate athletics.

Peterson is one of the moderators for the College Basketball reddit page on Twitter, which has 23,300 followers.

“I have a deep passion for collegiate athletics, like I live and breathe college sports in all ways,” Peterson said. “There is a lot of appeal to Pepperdine specifically because of the great competition you get that comes to Firestone and the potential national exposure we can receive from playing teams like Gonzaga and BYU.”

Peterson said his deep love for collegiate athletics may seem strange to some people, but to him it is a part of who he is.

“The most important thing you can do as a fan is to figure out how much of yourself you are willing to put into this relationship and I feel I have developed a good balance between my emotional response and the outcome of the game,” Peterson said. “At the end of the day college sports are a game and the results are largely inconsequential.”

A third superfan of Pepperdine Men’s Basketball is someone who has never attended Pepperdine. Asher Low is a student at the University of Wisconsin who grew up in the Southern California area.

“I became basketball-obsessed when I was 5 years old and my dad wanted to find cheap basketball games we could attend with our family,” Low said. “It is a fantastic level of play and you get up close and personal with great players, some of whom have gone on to play in the NBA.”

Low said he is a fan of senior guard Colbey Ross and is excited for his future after capping off his senior season at Pepperdine.

“I loved that they were able to finish the season with a championship, especially for Colbey,” Low said. “It will be great to see him play at the next level and seeing where he started versus where he is now is incredible.”

All three fans have received praise and recognition from the Pepperdine players and the athletic department as well.

“The guys on the team will retweet my stuff and it is funny because I do not talk to any of the boys in person,” Mazen said. “People sometimes think that I want to be friends with all of them, but for me it is all about enjoying the sport.”

Despite being in Wisconsin during his college years, Low still follows the team closely.

“I will send the players messages and they always respond and are thankful that I show them the support I do on Twitter,” Low said. “I love to see that people I have followed are doing well in their lives, and I am always appreciative of people showing me love.”

Like Mazen and Low, Peterson has been recognized by those involved with the basketball team, but he said that is not his ultimate goal.

“I think it is awesome to get retweeted and have interactions with the team in any capacity, but I find that introducing people to Pepperdine basketball who have never heard of it to be way cooler,” Peterson said. “I pride myself on introducing people to the team and acting as an ambassador for the team to the rest of the world.”