Summer Movie Recap: Blockbusters are Back 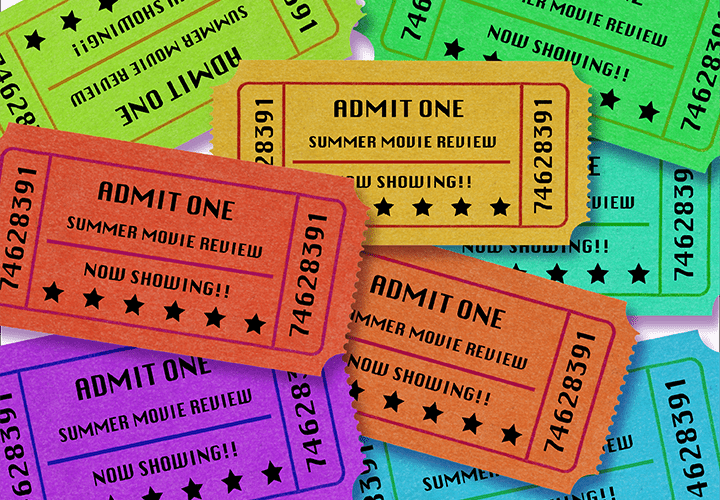 Summer is always a busy season for movies, as studios release hopeful blockbusters and try to capitalize on the extra free time many people have in the summer months.

This summer, however, was especially full of new releases, as many films originally slated to premiere in 2020 finally debuted. After missing the 2020 summer film season due to the COVID-19 pandemic, audiences and studios alike anxiously anticipated this summer’s massive lineup. Even amid these unusual circumstances, the films that came out this summer included big hits and big misses — a feature of every summer season.

Box office success defines blockbuster films, and no one is more familiar with that success than director M. Night Shyamalan. His film “Old” premiered July 23 and topped the box office during its first weekend. 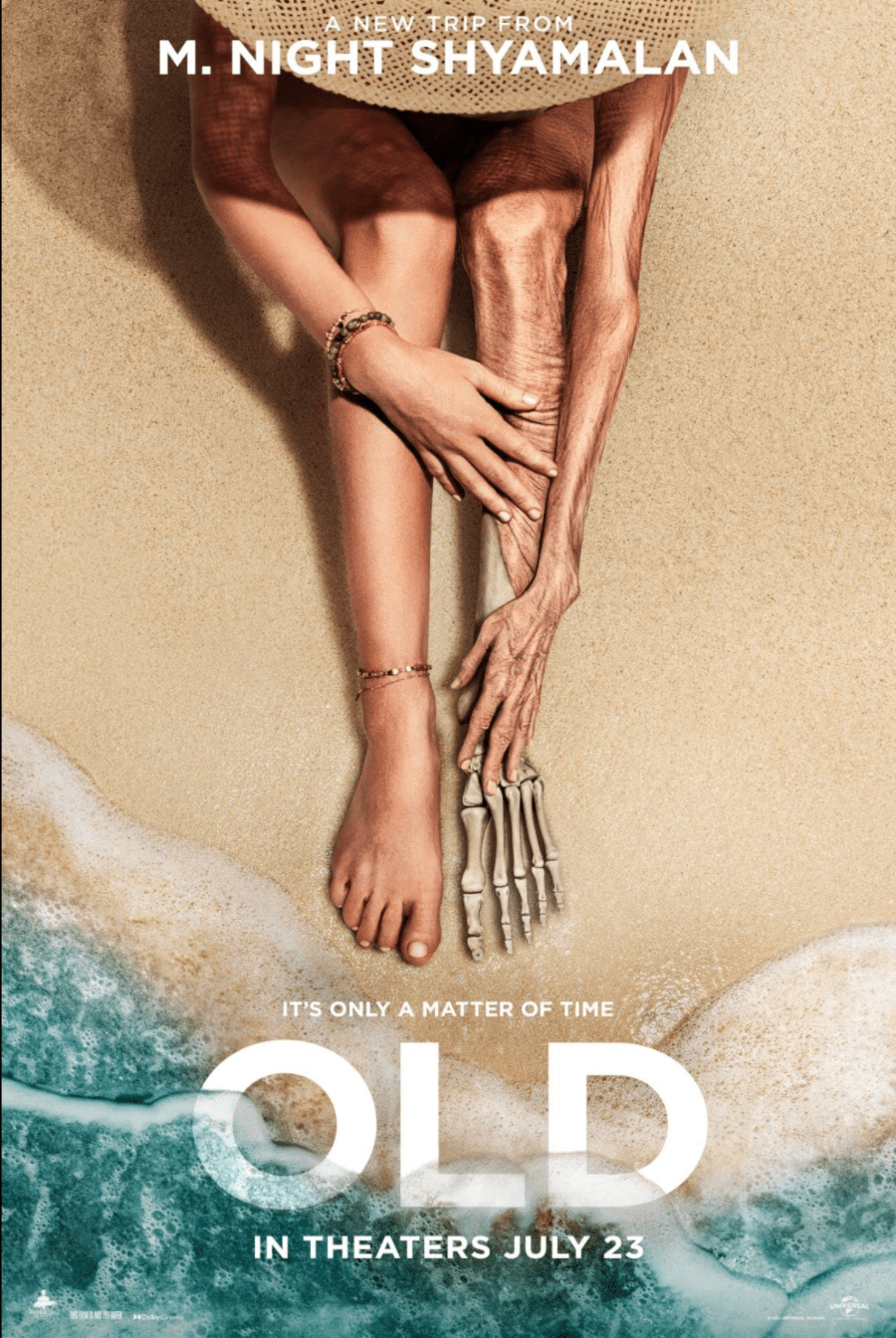 The poster for “Old” shows a woman sitting on a beach as her leg becomes just bone, a sign of her rapid aging. This kind of supernatural plot is typical for director Shyamalan, who rose to prominence with his 1999 hit, “The Sixth Sense,” and is known for his film’s plot twists and suspenseful tones. Photo Courtesy of Universal Studios

“Old” tells the story of a group of guests at a tropical resort who end up on a secluded beach where they all begin to age rapidly. Increasingly disturbing events occur as they try to find a way off the beach and understand what’s happening.

In typical Shyamalan style, this film includes a plot twist in its third act and is characterized by its unique cinematography and strong performances from its lead actors, particularly Gael García Bernal, Vicky Krieps and Alex Wolff. While it’s not one of Shyamalan’s best films, due to its simple premise and anticlimactic conclusion, it is a fun and suspenseful movie that is perfect for summer, as proven by its financial success.

The horror genre also had a very successful summer, both in theaters and on streaming services. The latest installment in the Conjuring franchise, “The Conjuring: The Devil Made Me Do It,” was a box office hit, while Netflix’s “Fear Street” trilogy saw success with viewers at home.

“The Conjuring: The Devil Made Me Do It” is the third installment in the Conjuring series. With Michael Chaves directing, this is the the first to be directed by someone other than James Wan. The film premiered in theaters and on HBO Max on June 4 as part of Warner Brothers’ deal with the streaming platform to showcase new releases on the site for 30 days after their theatrical release.

Chaves’s Conjuring entry follows his lackluster 2019 directorial debut, “The Curse of La Llorona.” His sophomore effort, however, is much improved and rivals both the previous installments in the film series. Tonally, his vision is more vibrant than Wan’s, a refreshing change of pace for the franchise that includes a terrifying rendition of Blondie’s “Call Me” and a lovely romance subplot for the franchise’s main characters, Ed and Lorraine Warren. 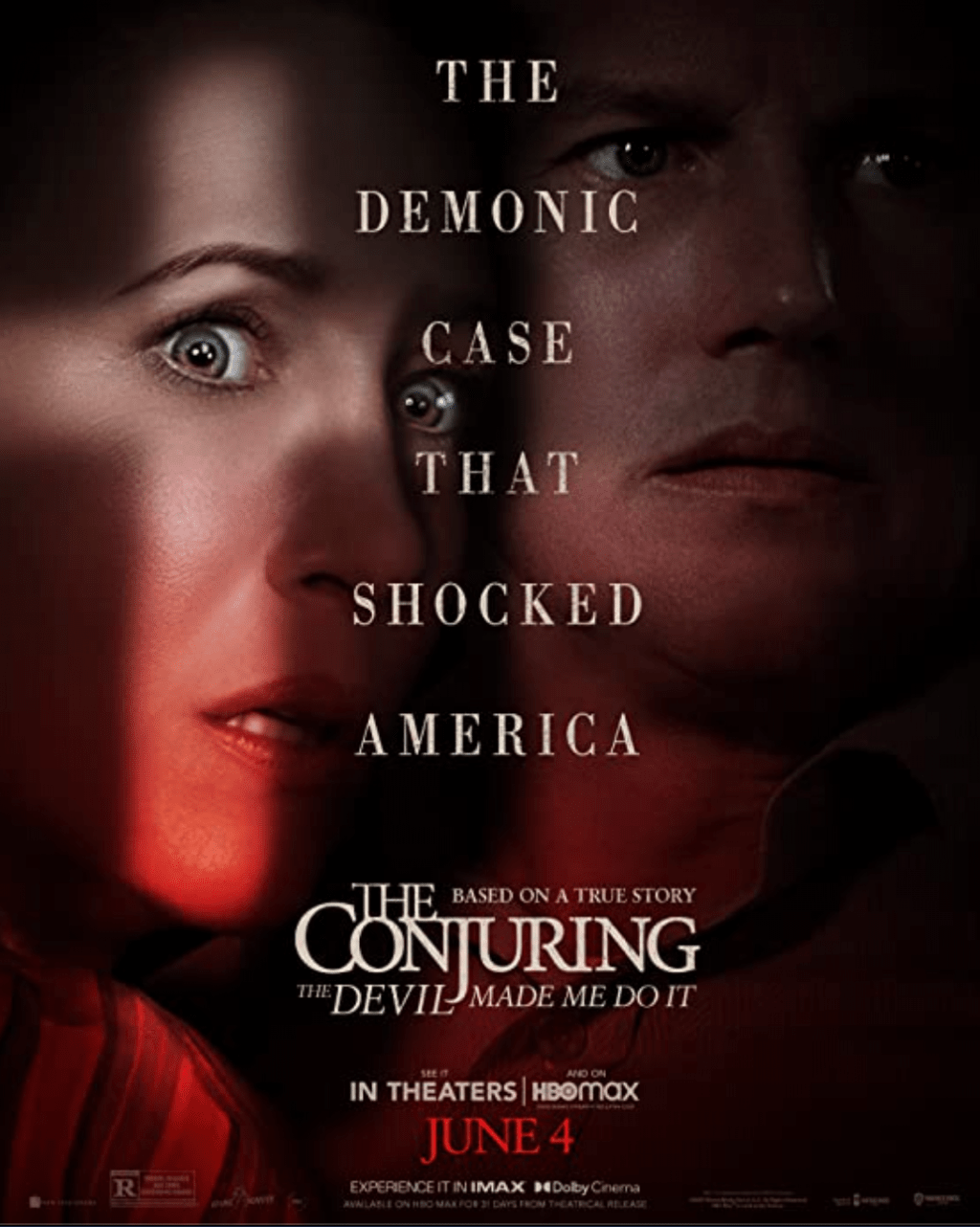 The official poster for “The Conjuring: The Devil Made Me Do It” shows Patrick Wilson and Vera Farmiga as Ed and Lorraine Warren, the stars of the franchise. As indicated by the poster, the events in the film were loosely based on a case of demonic possession recorded by the actual Warrens. Photo Courtesy of Warner Bros. Pictures

While “The Conjuring: The Devil Made Me Do It” premiered both in theaters and on streaming, Netflix’s “Fear Street” trilogy is available exclusively on the streaming giant, and each installment debuted individually over the course of three weeks.

The trilogy is based on R.L. Stine’s book series by the same name and follows the tragic and supernatural events that occur to teens in the town of Shadyside. The three films are set in 1994, 1978 and 1666, respectively. There are unique casts in the first two parts, followed by every actor making an appearance in the finale. All three parts are directed by Leigh Janiak.

Featuring three unique period pieces, a cast full of talented young actors and truly compelling storylines, the “Fear Street” trilogy accomplishes exactly what it aims to: entertaining and frightening teenagers. These films are clearly geared toward a younger audience and are hugely successful in connecting with that demographic. 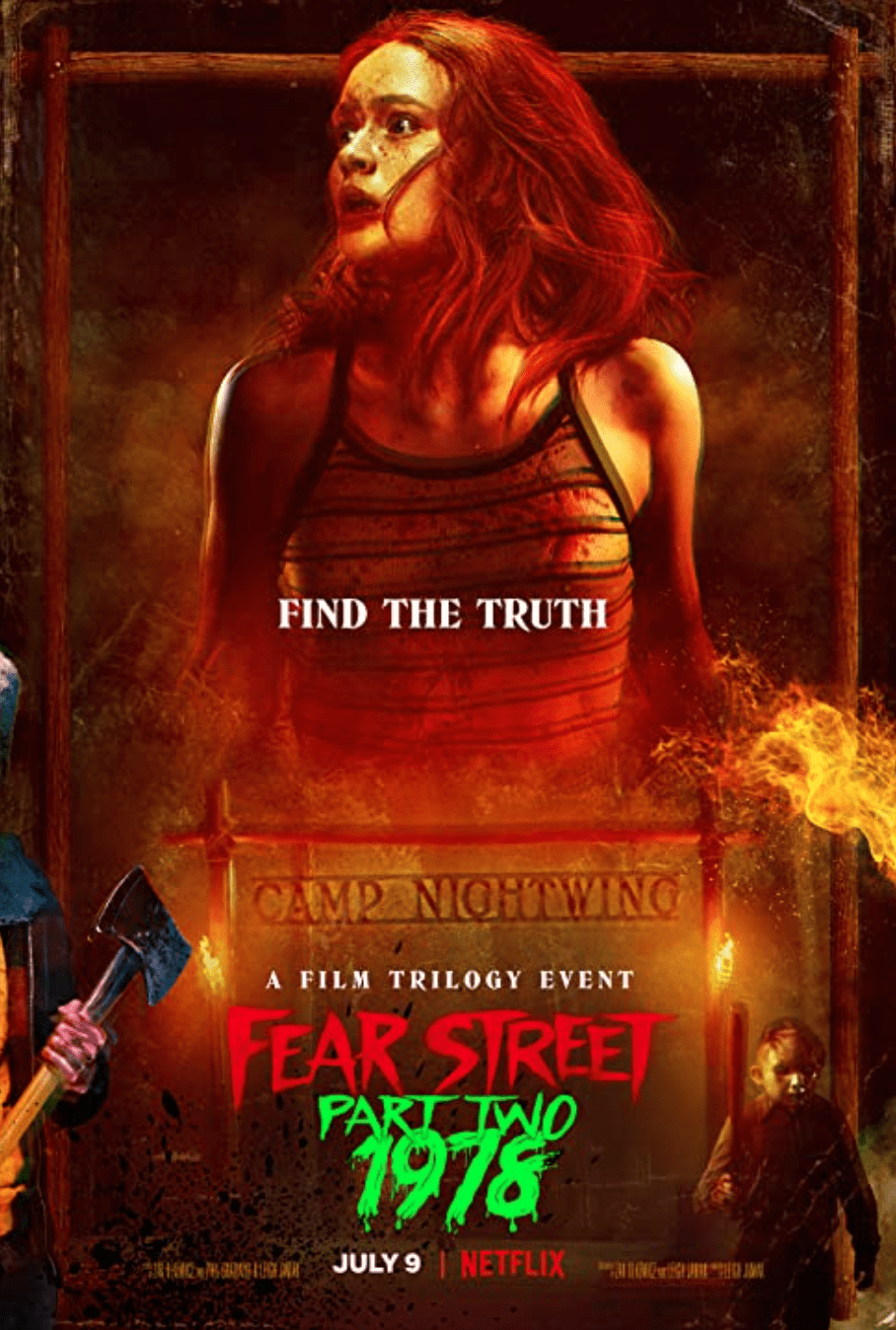 The second installment of the “Fear Street” trilogy, starring Sadie Sink, is a slasher film set at a summer camp in 1978 called “Camp Nightwing,” a clear homage to “Friday the 13th.” The obvious evocation of a horror classic, along with eerie similarities to “Stranger Things” show how the trilogy took inspiration from earlier works. Photo Courtesy of Netflix

The only real problem with the series is how clearly it takes inspiration from an already popular Netflix property: “Stranger Things.” The opening scene of the first part of the series, “Fear Street: 1994,” sees Maya Hawke working late in a stylized, neon-lit mall. Hawke’s character in “Stranger Things” works in a near-identical mall setting, making this an odd choice by Janiak, as the series is otherwise very original — except, of course, for the casting of another “Stranger Things” star, Sadie Sink.

While “Fear Street” delivered a new take on teen horror, Disney’s summer lineup was mostly lacking in new ideas. Led by “Cruella,” based on the iconic “One Hundred and One Dalmatians” villain, “Black Widow,” the Marvel heroine’s first solo film, and “Jungle Cruise,” a cinematic reimagining of the popular and controversial ride of the same name, Disney played it safe in theaters with recognizable stories. They relegated their original content, like “Luca,” to a Disney+ streaming-only premiere, while other films saw theatrical and streaming releases.

Despite “Black Widow” arriving in the Marvel Cinematic Universe much later than it should have, the titular character’s solo debut is exciting and features stellar performances from its cast, particularly Florence Pugh and David Harbour. The focus on the iconic female hero and her family dynamic at the heart of the film’s story, especially between Pugh and Scarlett Johansson, gives new life to an often boring and repetitive franchise. 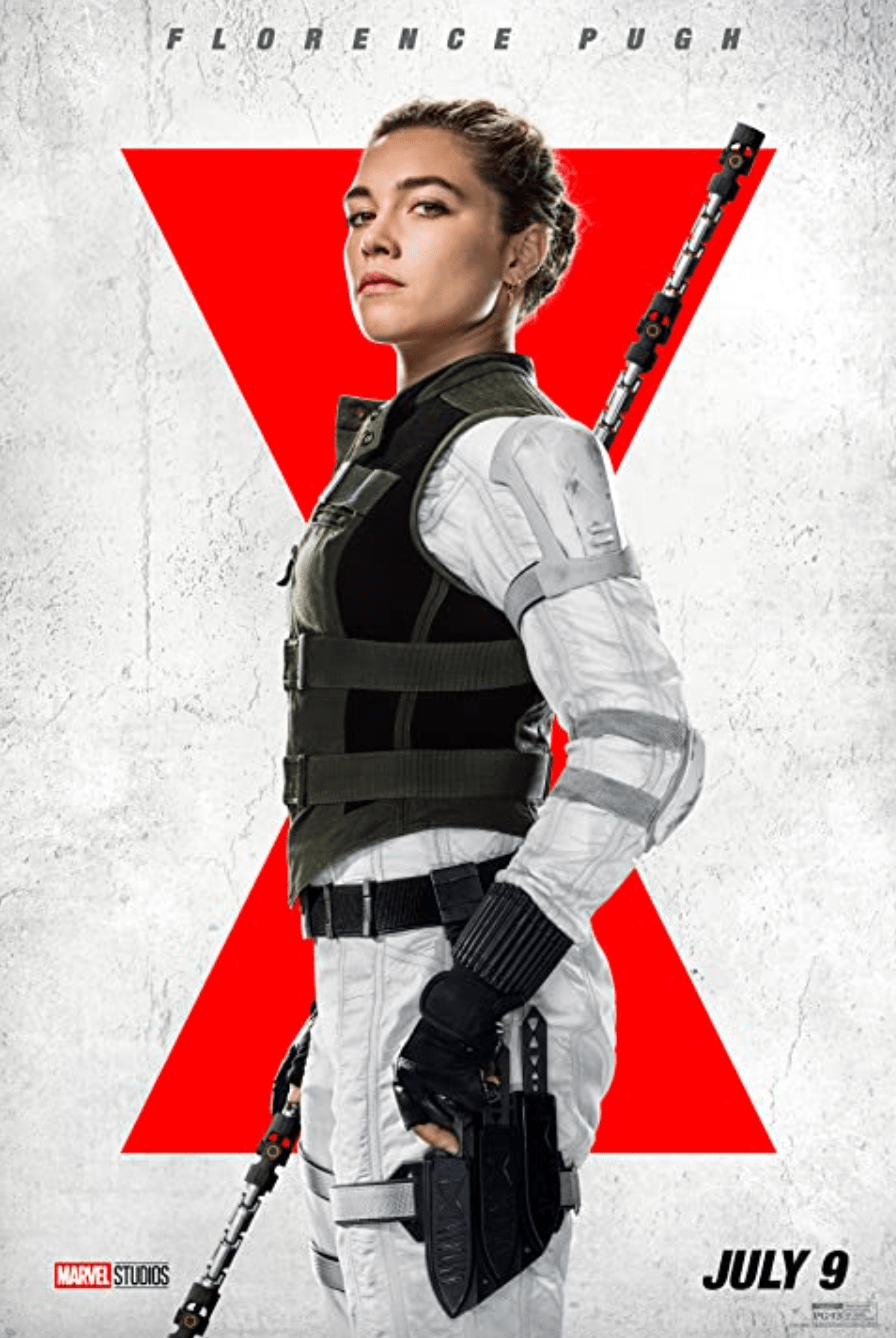 A promotional poster shows Florence Pugh as Yelena Belova wearing her own unique Widow suit. The dynamic between Johansson and Pugh was the most compelling aspect of “Black Widow,” bolstered by a great performance from up-and-comer Pugh. Photo Courtesy of Marvel Studios

As the long-awaited 2021 summer film season comes to an end, the future of the in-theater movie experience looks hopeful. As the pandemic continues, audiences can expect more same-day streaming and theatrical releases and the difficulties that accompany them, especially as studios prepare for an even bigger time for theaters: the holiday season.

Opinion: Complaining About COVID-19 Isn't Going to Make it Go Away 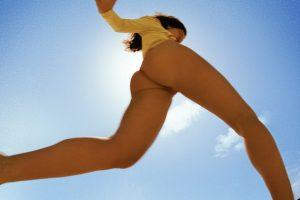 Lorde frolics on a sandy beach beneath the sun rays for her "Solar Power" album cover — one of her friends took this photo...
Copyright 2013 Jupiter Premium Magazine Theme
Back to top