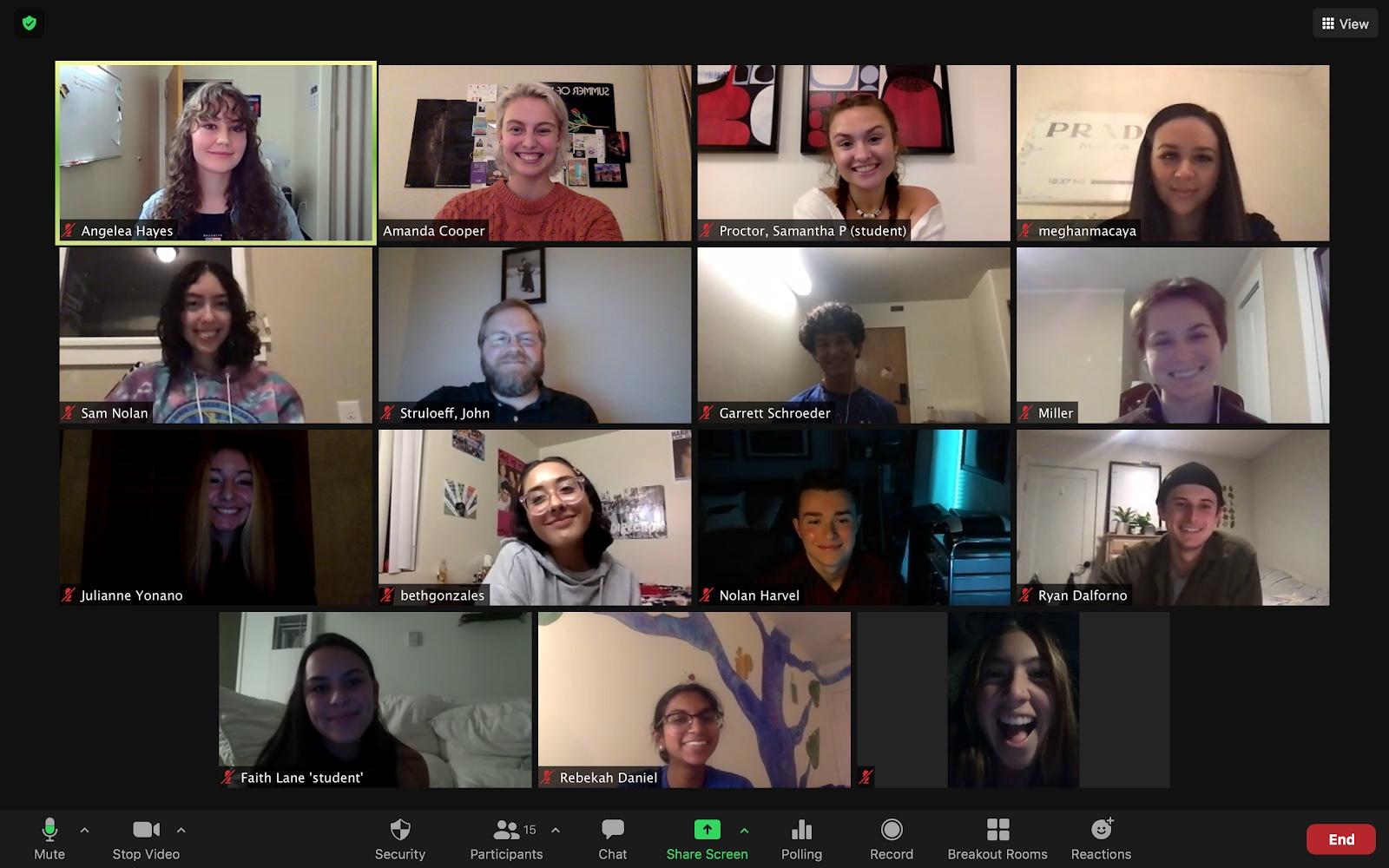 Students gather on Zoom to share original and published literary work. This event is usually in the Sandbar and features snacks and decor, but the staff had to adjust to an online setting this semester. Photo courtesy of Amanda Cooper

Expressionists is Pepperdine’s annual undergraduate literary and arts magazine, published in the spring semester of each academic year. It features submitted work from Seaver students — art in the form of poetry, prose, photos and the occasional screenplay.

“As the Expressionists is a magazine, it is also an organization that wants to foster a creative community at Pepperdine and give people a chance to have a literary outlet,” said Amanda Cooper, senior Creative Writing major and Expressionists editor.

During the event, students shared poems, many following the fall theme. Cooper introduced the speakers who were signed up to speak in the first half of the event. The second half featured an open mic opportunity where students could decide to share spontaneously, and some speakers read twice.

In keeping with the fall theme, Expressionists staff members read some well-known poems.

“I do definitely have a great appreciation for Robert Frost,” Macaya said. “I feel the way he articulates himself is very skillful and masterful. It’s definitely a similar style that I like to take on in my own poetry as well.”

Even Creative Writing staff joined in to share their original work. Director of Creative Writing John Struloeff read an original poem titled “Gravity,” which he wrote about Albert Einstein after many years of studying his life.

Despite having to remain online, Cooper said she believes the first Zoom event went smoothly and was very organized. She was happy with the turnout and the number of people who read but said the Zoom event is less effective than the in-person experience.

“The coffeehouse setting is usually good for having small conversations, gathering and catching up with everyone and the camaraderie of fellow writers getting together,” Cooper said. “But with the Zoom platform, spontaneity is much more difficult.”

Struloeff said Zoom events can have their bright side too.

“Students are always busy this time of the semester and Zoom makes it easier to attend,” Struleoff said. “Some also feel shy in a live-reading and Zoom can help ease that anxiety too.”

It can be challenging for students with different passions to find community this semester, but Cooper said Expressionists is attempting to find ways to keep student writers united.

Cooper said amidst the COVID-19 pandemic, people have been consuming more art than usual, whether it is TV, video games, music or books. She said this is why Expressionists’ events are working to show that art is more than just a hobby.

Cooper said students can submit their entries to Expressionists magazine’s upcoming spring edition, themed “We too are America,” which will showcase the diverse voices of Pepperdine students who will speak about what it means for them to be in America.

Nolan said the best way to stay informed about this new issue and more events is on the magazine’s Instagram @pepperdineexpressionists.

The Expressionists’ staff said they feel that letting students express their creative inventions is the reason they created the magazine. Struloeff said art is needed now more than ever.

“There is so much in our world right now that is promoting divisiveness, and coffeehouses help to heal that fracture,” Struloeff said.