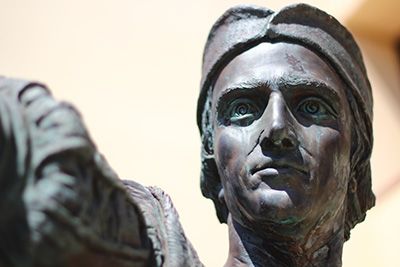 “In 1492, Columbus sailed the ocean blue.” Everyone remembers this familiar adage from elementary school, where it was taught that Christopher Columbus discovered the New World while trying to find a new route to the gold and spice islands of the East. This discovery is attributed to Columbus, even though Leif Erikson reached Canada more than 500 years earlier. It is also often attributed to Columbus that he discovered the world is round, despite the fact that the Greeks proved its sphericity in the sixth century B.C.

Despite the questionable nature of many of his accomplishments, Christopher Columbus has often been treated like a hero in the United States. Schools are named after him across the country. He even has his own federal holiday. Here on Pepperdine’s campus a statue of Columbus resides outside of the Caf, by the Ampitheater. The statue, donated in 1992, is in a prominent location on campus. 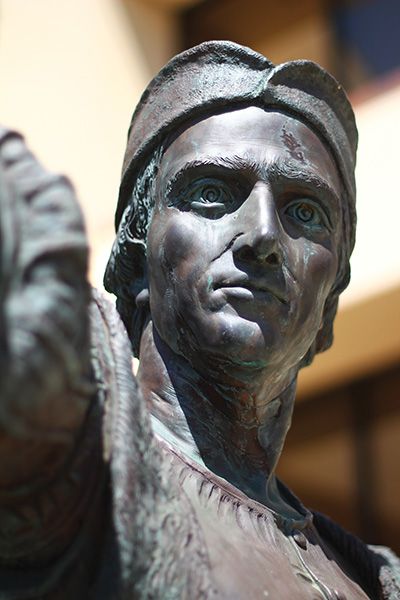 However, the opinion towards Columbus has never been fully positive, and in recent years, opposition to the idolization of Columbus has been magnified by an increased desire to tell history from the point of view of a more diverse population.

Columbus started colonizing South America for Spain, helping instigate the European colonization that led ultimately to the circumstances that created the United States. This colonization in its own right can be held in both a positive and negative light. On top of his imperialistic nature, however, Columbus was also a renowned slave trader that is responsible for ordering atrocities on the indigenous peoples that inhabited the land he colonized.

The opinion on whether or not Columbus should be held in such high regard varies drastically depending on personal views. This mix is no less present on Pepperdine’s campus. The statue is often a point of confusion to students and has a varied reception for the 23 years it has been on campus. 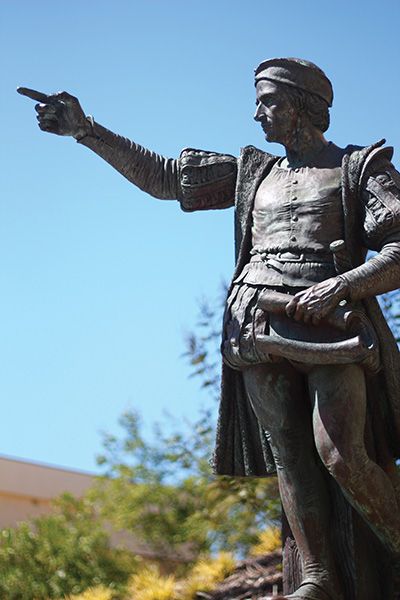 “The Christopher Columbus statue is kind of random considering Pepperdine isn’t necessarily focused on exploration other than the IP program,” junior Hayley Berry said. “It doesn’t make sense for them to have an adventurer’s or explorer’s statue.”

Student objections to the statue are both because of Columbus’ immoral actions and because of the seemingly random placement of having the statue on Pepperdine’s campus.

“If there was someone who made it to the West Coast, that would make more sense, or you could even have a tribute to the natives that were here before instead of a tribute to the conquering Europeans,” senior Alexa Corbin said. “It’s just random.”

Professors have similarly confused interpretations of the statue. “I don’t think it is a matter of right or wrong to have a statue of Columbus on campus,” Professor of History David Baird said. “It would make more sense to me, however, if it were placed on our campus in Florence, Italy. It certainly would make Native Americans happier if that were done. But the statue was the gift of an important patron, and that has to be factored into the decision about location.”

Despite the confusion over the statue, it does not seem to deeply concern the Pepperdine community even as much as the statue of Doloris, the cherub placed outside of the Caf.

In regards to the Columbus statue, Corbin said, “I like it better than the creepy baby doll.” 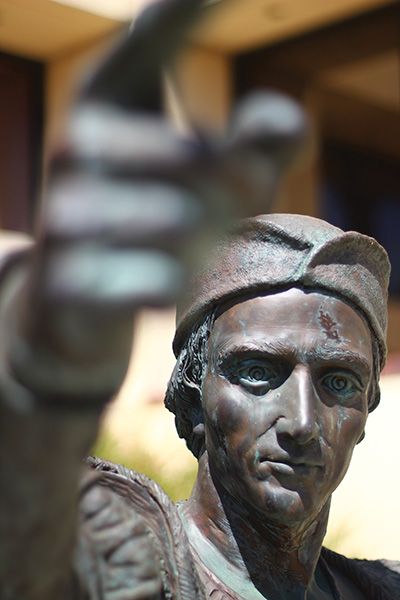 This, it turns out, is a common sentiment. “I would like to see that white little cherub statue that everyone keeps repainting removed,” Professor of Political Science Jason Blakely said.

The Pepperdine community is more confused by the statue of Columbus than deeply concerned for what it stands for. However, the statue must be thought of in the context of Pepperdine’s mission of purpose, leadership and service. It must be examined whether a man that was definitely not a service-minded leader should be canonized forever as a statue.

“I think that having the statue of Christopher Columbus on campus is fine,” Professor of History Stewart Davenport said. “No one is perfect and Columbus did both impressive and horrible things. But we commemorate in statues America’s founding fathers such as Washington and Jefferson, and they were slave owners. If we can’t put up a statue of a person who did anything wrong, we would only have a bunch of statues of Jesus all over the place, and maybe Mother Theresa. I don’t think we should commemorate someone who was clearly evil, like Adolph Hitler or Joseph Stalin, or Pol Pot, but moral perfection is too high of a bar for most people to meet. Moral ambiguity — doing both good and bad things — more accurately describes most of us, including Christopher Columbus.”

Having a statue of Columbus on campus does not mean that Pepperdine is promoting the inhumane actions of the explorer, but is celebrating the achievements of a man who is neither completely hero nor villain.

What Did You Do for Break? 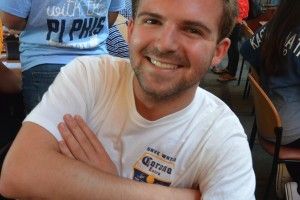