Each year, approximately 75 students are found in violation of the no-tolerance alcohol policy, Sharon Beard, associate dean of students for Community Standards, said. While students are dealing with being found guilty of the standard substance restrictions concerning on-campus intoxication and possession of alcohol, there are some discrepancies regarding how the Community Standards office actually operates and how their operations are perceived by students.

Students may sometimes hear about their fellow peers getting “caught,” but they may not know what actually happens to these students. The Community Standards office and the students it deals with have extremely contrasting ideas.

Beard said that the purpose of the Community Standards Office is to protect the Pepperdine community and uphold the campus standards, and that influences how alcohol violations are dealt with.

“[Our purpose] is to provide a fair process for our students who had been charged with violating the code of conduct,” Beard said.

“It’s like they literally want to get people in trouble,” said junior Sally Jones,* who was charged with possession of alcohol and underage consumption earlier this semester. “It’s like regardless of anything, if you get called into [the Community Standards Office], you are most likely going to get found guilty.” 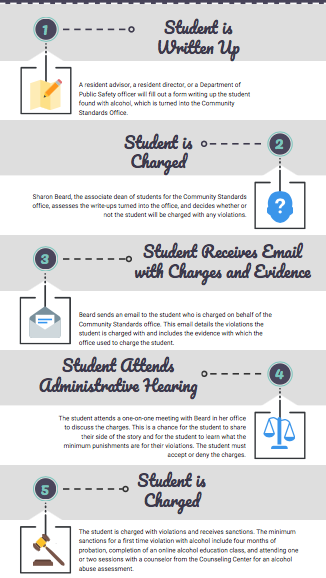 The judicial process, beginning when a report is made and sent to the Community Standards Office and ending with charging a student, is followed “to a T” in every unique situation, Beard said. Either a resident advisor, resident director or the Department of Public Safety completes a report of the incident, which Beard then assesses to determines if a student will be charged.

This doesn’t mean that a student is automatically found guilty. When a student is charged, they receive an email detailing the charges made against them and directions to meet with Beard for an “administrative hearing.” All of the reports initially made about the situation are included in this email, so the student isn’t kept in the dark, Beard said.

“There isn’t secret information that the student doesn’t know about,” Beard said.

Jones said she had a different experience.

“It took me two weeks to get the photos that were attached in the accusation,” Jones said.

Jones’ roommate took the photos and submitted them to their RD. They depicted bottles of alcohol on the counter of their Lovernich apartment.

Beard said while the initial report and charges are processed and emailed to the student within a week, it is not unusual for evidence to trickle in throughout the process. If this is the case, the student will be sent the information as it comes in.

“We don’t want to have to wait to get word to the student because they want some information,” Beard said. “So we’ll go ahead and send the charge letter and then as soon as I receive additional information then I will try to share it with them.”

Also, Beard said if there are several cases being processed at the same time, the Community Standards Office is forced to push back incoming cases before scheduling a hearing.

“There’s a lot of moving parts,” Beard said. “[We’re] looking at schedules too. So there is the committee schedule, the student’s schedule … it’s a lot of scheduling.”

Jones said the process, from the initial email charging her with alcohol violations to ultimately being kicked out of her apartment, lasted three to four weeks.

Beard said the duration of the process in its entirety is dependent on the severity of the charge as well as the number of people involved.

During the hearing, Beard asks the student in question to either deny or accept responsibility for the charges, and afterward Beard is the only person who makes the final decision on the actions to be taken.

Beard said for first-time violators of the alcohol policy, there are three standard and minimum sanctions: four months of probation, completion of an online alcohol education class and attending one or two sessions with a counselor in the Counseling Center for an alcohol abuse assessment.

“If [a counselor] believes that ongoing treatment is necessary, then they will let me know,” Beard said. “The student is required to fulfill any recommendations that the Counseling Center makes.”

Jones said part of her charges included moving out of her apartment just days after being charged.

“Typically that happens because the roommate brought forward information and it immediately causes a really uncomfortable living situation,” Beard said. “If someone is being required to move out of their space, it’s for a temporary period. When it gets to the point where it has become a living situation that can’t be tolerated anymore, then it needs to be immediate.”

Jones is on probation until Jan. 19 as a result of her charges.

“There was no proof of me consuming anything,” Jones said. “But I still got charged with underage consumption.”

Even though the photos that were used as proof to charge Jones didn’t include Jones, Beard maintained that this was still viable evidence for possession.

“If [alcohol] in someone’s room, everybody who’s in that room is responsible,” Beard said.

Beard said there are several types of information that are taken into account when charging a student, including eyewitness accounts and photo evidence. The Community Standards office doesn’t use anonymous tips to charge a student, but either a residential advisor or director or DPS officer always investigates them further.

Most students are reporting incidents including alcohol through the LiveSafe app, Beard said.

Multiple students believe the judiciary process regarding alcohol violations is unfair. Students who underwent this process said they felt as if they were left in the dark, and that the process was damaging to their wellbeing.

“It was the most stressful experience of my life,” Jones said. “The trials were happening during when I had classes, so I had no choice but to miss class. I was getting all of these emails when I was in class too, and I would have literal panic attacks. I fell so behind in school because it was so distracting.”

Jones said she was confident about how her administrative hearing with Beard went, but was surprised when she was found guilty of all the charges against her.

“I thought it went really well,” Jones said. “[Beard] was joking with me and laughing, and I was like ‘What a lovely lady.’ And then I was like, ‘Never mind,’ because literally the next day I was found guilty of everything.”

Beard said students should always expect the minimum amount of sanctions if they are found guilty.

“I would never want to lead a student to think because I’m nice to them or because we had a really productive conversation that that means that they’re not going to be held accountable and responsible for the violation,” Beard said.

Martha Smith,* also a junior, said she was charged with hosting a party, dishonesty, consumption of alcohol and possession of alcohol, among other things last February.

“It was a very complicated situation,” Smith said. “I lived in George Page, and there was eight of us in the apartment. I came back to my apartment and my roommates had some people over and they were drinking, and as I was getting ready, more and more people were coming. Then the RAs and DPS came and caught everyone.”

Smith said she left the apartment before DPS arrived, but because one of her roommates said she was there, she was still charged.

“[They charged me] just because the girl said I was there,” Smith said. “They had no other proof.”

“[The Community Standards office] said it was the biggest Pepperdine party in a long time,” Smith said. “So that’s why they went so crazy about it, I guess.”

What can be fixed?

Both Smith and Jones said this process dragged on and took much longer than needed, causing them extreme stress. They said in order for this process to be more effective, the Community Standards Office should shorten it.

“I was distraught for that time,” Smith said. “I could not do school. I was crying every day. So maybe try to get it in a shorter period, figure that out somehow.”

Beard said it is sometimes unavoidable to de-stress these situations.

“We definitely don’t want [the process] to be stressful,” Beard said. “I just think unfortunately receiving any correspondence from my office is.”

Jones said the office in charge of making these decisions should have more compassion toward the students.

“I wish Pepperdine gave kids a fair shot to say their story,” Jones said. “The one thing that bothers me with Pepperdine is there is literally zero room to be a teenager growing up. You have zero room for error.”

Beard disagreed and said her office is not looking to get students in trouble.

“We love our students and we want them to be healthy,” Beard said. “We want them to make good choices. I promise you I have better things to do with my time than try to find a way to make people’s lives miserable.”

There are some students who agree with Beard as well. Senior Monica Pereda said she thinks the minimal sanctions for an alcohol violation are fair.

“I think it is a fair process, only because Pepperdine is a dry campus,” Pereda said. “Alcohol not being allowed on campus is something I understand, considering its rules and regulations.”

For more information about the judicial process, visit the Pepperdine Code of Conduct site. 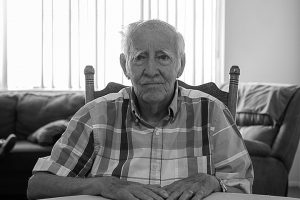 Photos by Kaelin MendezThis photo series was submitted as a psychology capstone project that strived to explore subjective...
Copyright 2018 Pepperdine Graphic
Back to top