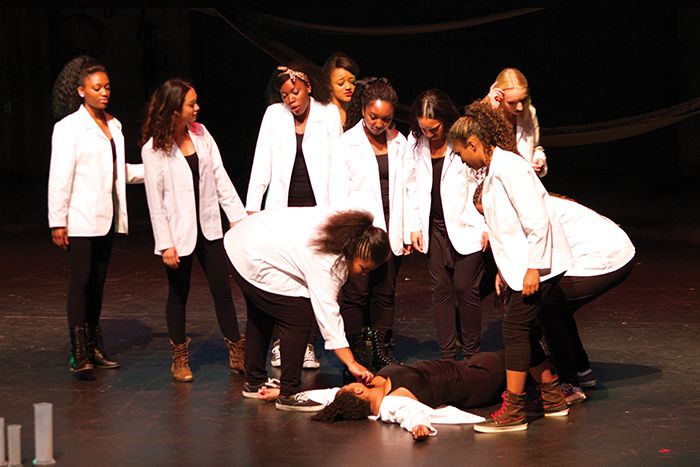 The Pepperdine Step Team has left audiences in awe of its unique dance style many times before. The team is known for performing at Blue and Orange Madness, as well as sporting events and convocations. Four years ago, they put on their first solo production and since then, it has become an annual event.

“This year I reached out to a friend of mine who is a creative writing major [to write the script],” said Step Team Captain, senior Myah Stone referring to senior Karl Simpson.

Stone said they obtained a significant amount of help from people who are not part of the team.

There were also a couple of interlude performances by Pepperdine students who are not on the team.

This year’s production took place Tuesday evening after months of dedicated preparation. Many people were excited to see the direction the program was going to take in this one-night show.

“This show is really different,” Stone said. “Normally it is more lighthearted and kind of funny, but this year we took a more artistic approach. The theme this year is ‘Zombie Apocalypse’ so it’s a little bit darker, including the music choices, the scenery, the graphics that we’re using so I think that has pushed us to grow in our art form.”

The Step Team members said they were very eager to get help from other sources.

Osborne also said the Step Team has made a big impact on her life.

“It has definitely helped me grow as a dancer, learn about step more, and also connect with the girls, who I may not have ever even met personally,” Osborne said. “Also, it’s helped me grow more as a leader; it is very student-led so knowing that you have to take on certain roles that usually students don’t.”

Similarly, other step team members feel they benefit from this organization.

“I love performing, it’s so much fun,” junior Co-Captain Jimesa Coxsey said. “I just love those moments when we get to go out and the energy of the crowd is so good, that is definitely the coolest part; and being able to run out and feel so accomplished.”

Coxsey will be taking over as captain during the next school year.

According to Stone and Coxsey, the dynamic of the team is crazy in a fun way.

“You never know what to expect with our team,” Coxsey said. “It’s a bunch of big personalities. We have a lot of performers, so we’ll be taking a break, a song will come on, and everyone will go crazy dancing.”

Freshman Nyah Wilson agreed,“Being able to dance, even just in practices is fun.”

Still, as a relatively new organization on campus, the Step Team has had to overcome various obstacles.

“Since we are in our fifth year, we are becoming more established and I think this year really set us off with being more recognized on campus,” Stone said. She said funding has been a great challenge for their team. “I think the biggest [challenge] is big production companies like Dance in Flight, or Songfest, have an adult staff to help them do things; Step Team is completely student led,” Stone said.

Four girls left the team recently due to personal reasons, particularly because of the time commitment that is required of members of the team. Practices for Tuesday’s performance began in January. They take place three days out of each week and last anywhere between two and three hours.

As for the effect there was on the team after those women left, members do not see it as a negative one.

“It kind of brought us closer together, because we are the mighty few that had it in us to stick through,” Stone said. “We completely love the people who had to withdraw and we completely support them with everything. They always support Step Team and we know that if we ever need anything, they would be willing to help out.”

There are 12 women on the Step Team and no men; however, this is not an all-female organization. In fact, Stone encouraged men to try out for the team.

“We would love to have guys” Stone said. “The art form of step started with men, so we want to bring that to campus and make guys feel included and involved, as well.”

There have been many Step Team performances since it first became an organization on campus. There have been six performances this school year, including the show Tuesday evening. Different women have found different reasons for loving their time on the team.

“As the teams have changed, learning to all step as one and be in unison [has been the greatest challenge],” said Step Team member junior Ashley Thurmond. “This show is different than the last two I’ve been in. It has a different storyline and I’m excited for people to see that. Everyone has their piece and everyone is super important in each single step, each single dance, and so I’m excited for that to bring us together and for us to cheer each other on.”

The story for Tuesday’s performance began with a lab experiment gone wrong, which resulted in one of girls becoming unresponsive. Once this happened, the rest of the women attempted to use the art of step as a form of helping her return to normal. They figured it was rational to try to “step it out of her.” This was the only solution they could think of as they were on the brink of disaster. In the end, though, she was not saved and turned into a zombie instead. Throughout the show, the rest of the girls slowly turned into zombies as well.

Despite attempting to find a cure even as they kept losing their friends, they were unsuccessful. It was see an unconventional ending.

Wilson was the last woman to “die,” and audience members were led to believe she would find a cure and a way to save her friends. However, just as she reached safety, she began to have convulsions. At this sight, one audience member screamed, “Nyah! No!”

Once Wilson turned into a zombie and the rest of the girls entered the stage to take her, it was evident the show’s ending was straying from the typical cookie-cutter happy ending stories tend to have.

However, despite the dark topic, the story was carried out with plenty of comic relief. Audience members were laughing constantly and never stopped cheering the step team on and providing enthusiastic encouragement.

The Step Team will perform again on April 25 at Loqui, an event put on by Intercultural Affairs.