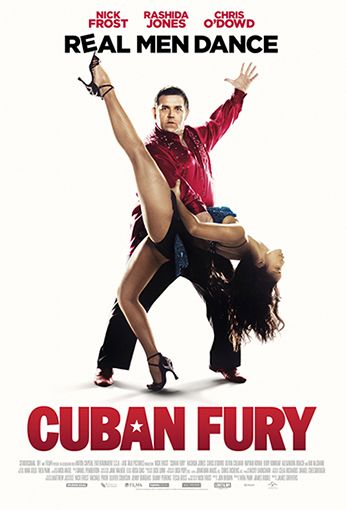 Salsa or die. Coming to theaters April 11 is a new comedy about the life of an overweight and under appreciated salsa dancer. British actor Nick Frost, who is best known for his works in the parody “Shaun of the Dead,” takes the screen as Bruce, a former salsa dancer who tries to reconnect with a lost passion. Twenty-five years after a traumatic bullying accident, Bruce dances his way back to his salsa escapades to capture the attention of the new boss, Julia (Rashida Jones) after he discovers her love for the dance floor. With the help of an old coach, Mr. Parfait (Ian McShane), and new friend, Bejan (Kayvan Novak), Bruce gains his confidence through dance.

Meanwhile, frenemy and co-worker Drew (Chris O’Dowd) also tries his best to lock Julia in and push Bruce to the margins. Scheme after scheme, Drew grows closer to Julia as Bruce silently gets shoved aside. The pesky taunting between the two frenemies continues until Bruce initiates a dance-off. Bruce does not give up on his love or his talent and uses dance to conquer all the obstacles life — and Drew — places in his path toward Julia.

Despite its multiple comedic opportunities, there is very little evident chemistry between Bruce and Julia. The two scream platonic relationship and make it difficult to convince the audience of any deep connection besides their common enjoyment of hip shaking. Whether it is Jones’ timid on-screen personality or Frosts’ goofy demeanor, the two do not mold into a romantic couple — instead, they leave the audience feeling confused as to the status of their relationship. Are they dance partners or lovers? The relationship between Bruce and Bejan, his new friend from dance, is more believable than the office romance.

The fundamental storyline of “Cuban Fury” is far from the only downfall. Jumping from scene to scene, the film has little flow to offer, causing it to be choppy and unfocused. This is not too surprising considering the director, James Griffiths, has primarily worked in television production prior to this film. The film provides little build up, and before the audience knows it, the biggest scene is abruptly on screen.

Wishy-washy writing and poor script development leads to a slightly funny, but not hysterical comedy. “Cuban Fury” has the potential to create belly-cramping laughs, but fails to execute the material correctly and only succeeds in becoming yet another comedy that produces half chuckles and boredom. It only warrants 2.5 stars out of 5 due to its lack of persuasion and stale jokes. The film is not worth the $10 (or more) at the theater — I would wait to find it in “New Arrivals” on Netflix.