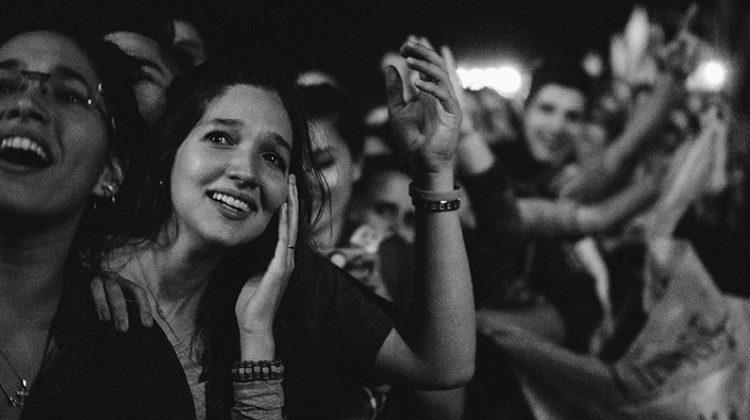 Photo courtesy of Matthew Benton | A fan in the crowd at Lollapalooza in Buenos Aires, Argentina, teared up while watching the band Mumford & Sons perform live in March 2016. Benton said he looks to capture the relationship between an artist and their audience when photographing live music events.

For Matthew Benton, music photographer and director, the feeling he has when looking at a photo he has taken of an artist goes beyond the single moment it captures.

The 2018 Pepperdine alumnus said he not only pays attention to the lighting and the composition, but while editing the photos, he also listens to the artist’s music, inspiring his work to capture the emotions the artist conveys.

“For me, live music photography is about capturing the relationship of an artist to their music, to their audience, to kind of the creativity that goes on behind the scenes,” Benton said.

Photography serves multiple purposes — it is art, as well as a way to express oneself, collect memories, document important moments, connect people with others and evoke emotion. Four photographers shared how they fell in love with photography and discussed their connection with the medium.

Amy Zielinski, a photographer and photo editor for a major photo archival site, taught photojournalism at Pepperdine during the Fall 2020 semester. Zielinski has traveled around the world, documenting music and culture.

“I just love that feeling of stealing time,” Zielinski said. “And making that moment in time last longer than reality, and I love that stealing — that and transferring our memories into something that lasts longer.”

Zielinski said one of the first experiences she had with photography was when her mom took photos of Zielinski, her siblings and cousins on the same staircase throughout the years, showing their growth.

Before the digital age became more prominent, Zielinski learned to develop film. She said the behind-the-scenes moments of seeing photos develop were important to her, and she appreciated the physicality of the whole process, smelling the chemistry that takes place and holding the image in her hand.

“I was walking into the darkroom and actually developing my own film and printing it all and seeing the magic of the chemistry right in front of my eyes,” Zielinski said.

Benton’s fascination with photography also began at a young age when he took photos of family hikes and his stuffed animals using disposable cameras. Benton said his father grew up taking and developing photos, and he still has the prints from when his father was in his 20s.

Transitioning to college, Benton said he took an interest in music photography after going to concerts and seeing professional photographers there.

“I always would see these photographers who were literally like, some of the largest photographers in their respective music genre,” Benton said. “I would see them and I’m like, ‘That’s really interesting, that’s really cool how they get to experience basically any angle, any part of the concert and capture that story.’ So I always wanted to do that.”

Through advice from other music photographers, Benton said he learned pretty quickly how to approach the profession.

“What really interests me is how can I use my access to find something really unique and capture a better story than just, like, the front of the face of a singer with a mic,” Benton said.

“I think I’ve always kind of had a love for collecting moments and collecting memories and saving them, and I think photography was kind of that way for me,” Ramli said.

When 2018 alumna Claire Fagin was 8, she had an underwater camera she used to take photos in the pool on summer nights.

“My mom was like, ‘Here, take this indestructible camera,’ like ‘OK, let’s go in the pool!’” Fagin said.

Fagin said she is now a floral installation artist and photographer, working with still life and organic matter.

If photos could talk

While photographing classical musicians, Zielinski said she became curious about whether she could capture the music through an image.

“I was very much interested in how to portray the musician,” Zielinski said. “What were they feeling? How did they look at that moment, and the passion that they had as they were playing their instrument?”

Zielinski said she then began a more than decade-long project photographing only the hands of classical musicians to see if she could capture their personality. She has yet to showcase this portfolio but found that the COVID-19 pandemic has added another layer of meaning to her work.

“I do find now the way I look at hands is very different since we haven’t been able to touch each other for a long time,” Zielinski said. “So I think that whole body of work is going to have a different interpretation.”

For Ramli, photography connects her with others and allows her to get to know people better.

“The extra, little bonus nuggets are my favorite because, one, like I was saying, it kind of shows personality and more of who they are, and it’s different than what I always have to be getting,” Ramli said.

During the pandemic, Fagin said she mainly took photos of flowers, sometimes creating her own floral installations as her subject. She started by going to the flower market, photographing the flowers she got and also doing some photo work for florists.

Fagin enjoys taking photos of people, but she appreciates how she can be in the zone when working with inanimate objects such as flowers.

“I guess it’s a good way for me to sort of just be in my own world and be able to create in my own world,” Fagin said. “And that’s always more of like a healing process for me.”

In her art, Fagin said she is working on surrendering to things she can’t control, such as having a photo not come out the way she imagines it but still appreciating it.

“I’m accepting that I’m powerless in many situations in my life,” Fagin said. “And as someone who would just absolutely prefer to control everything, that’s difficult, but in my art, in my personal life, I just have to accept powerlessness and just work with what I have and try and love what comes out from that.”

Emotions Fagin often wants to portray through her photos are authenticity, nostalgia and happiness, and she said she usually channels this through the use of color or a grainy look.

“I think something I love about flowers and that I strive for personally, just as a person, is authenticity,” Fagin said. “Like a flower is just what it is, and it’s not trying to be anything else.”

When Zielinski looks through the camera, she looks for that right moment.

“I think I’m looking for a level of drama and emotion at that moment,” Zielinski said. “Something that sets it apart from the mundane of everyday life.”

One photo, Zielinski said she remembers was of former President Barack Obama in November 2008. Zielinski was working in the newsroom waiting for the pictures of Obama to come in. The photo, taken by Joe Raedle, is of Obama shedding tears after mentioning his grandmother Madelyn Dunham, who had died that morning.

“I was so moved to tears at that moment and everybody else in the room, the CEO was there, like waiting to see what happens,” Zielinski said. “And, you know, you felt that moment of collaboration, of helping to get those pictures out on that very special day.”

Zielinski said she feels very fortunate to have played a role in editing memorable moments in history that the photographers she’s worked with have caught.

“Photos benchmark things, and when it comes to photojournalism, it reflects our world literally, showing history as it’s taking place,” Zielinski said.

Being in the moment

Capturing moments on a camera, however, can be overdone, Ramli said.

“I think it’s an awesome way to capture moments, but use it with caution, like, don’t overdo it because then you lose the meaning of it,” Ramli said. “Like the way that a lot of things are, you know, if you overdo something, sometimes you will lose the true meaning of it.”

Similarly, Fagin said she has also thought more about times when she should put the camera down and be present.

“As much as it’s like an instinct for me to capture a moment through photography, I do think there’s something to be said for sitting and soaking in a moment like through your eyes and through your brain,” Fagin said.

There is a distinction between taking a photo of a moment and being in the moment, Fagin said.

“I think in some ways, photography’s allowed me to be there in the moment, but almost be an observer of the moment,” Fagin said.