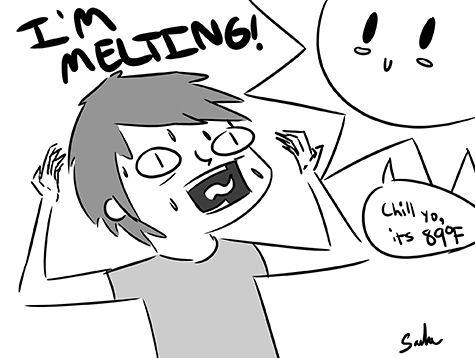 It’s that time of year again. The time when a rogue heat wave thrusts temperatures past the habitable zone of the native Malibuite, reaching well into the low-to-mid nineties. Flocks of undergrads shuffle from building to building, trying to escape heat levels experienced regularly by pretty much anyone living past the earshot of Inuits.

The Santa Ana winds have burst the Malibubble. They have upset the delicate ecosystem of Malibu, Calif., where temperatures outside the rail-thin range of 65 to 85 degrees are as rare as chicken from the HAWC. At least, that is what you would believe if you listened exclusively to conversations at shuttle stops, the dorms, Joslyn Plaza or the rest of campus where students gasp for cool air like a scuba diver suffering from oxygen deprivation.

In that vein, it is important to share the collective wisdom of the Pepperdine student body in ways to stay cool during the first few weeks of school. Soon we will reach freezing temperatures at the height of Malibu’s harrowing winter (Editor’s note: 55 degrees minimum).

The sweltering conditions, as uncomfortable as they seem, can have positive consequences on a college student’s budget: you can both wash and dry your clothes at the same time. While some methods of battling the heat are more obvious than others, it is important that no shadow is left untapped and no reservoir of air conditioning is left vacant when it comes to escaping the now-liquid asphalt.

The easiest way to escape the California heat is to spend as much time as possible indoors, not in one of the freshman ovens or upperclassman broilers, but rather the classrooms! Of all places to find a safe haven of air conditioning, few would suspect PLC 125 to harbor so many weak and weary travelers (“It’s not even a test day,” Professor Sorrell exclaimed fictitiously).

If by some cruel twist of fate classes are done by noon, however, some creativity will be necessary. The fountain may look like a beautiful and scenic addition to campus, but for students running from Humanities in the PLC to a religion class in the Appleby Center it can serve as an oasis in the desert. Besides, you’ll be dry by the time you get to your next class anyway.

As most upperclassmen and some freshmen are already aware, the library also offers a respite from the heat. There, you can study your life away in preparation for that 8 a.m. religion course, where the description of “a lake which burneth with fire and brimstone” increases in relevance as students schlepp across the plaza in slightly damp Polo Ralph Lauren apparel.

The Pacific taunts us from a distance, reminding us that the only thing standing between Pepperdine and its relatively frigid waters is a five minute, air-conditioned, often Macklemore-ridden downhill cruise ending in a popsicle-like state as students claw their way back to shore.

Closer to home, the sprinklers on campus provide much-needed refreshment, transporting the tired scholar to a tropical paradise of sorts, complete with green vegetation as far as the eye can see and the distinct feeling that local wildlife is watching your every move and biding time before it can reclaim what rightfully belongs to it.

The answer to the issues listed above is a complete overhaul of air conditioning systems in dorms and other, often older, buildings. Given the school’s vast budget, it is our hope the administration could pay to air-condition all of Malibu with a large ozone-slashing mega-cooler.

Eventually, we would like to see the administration spend absurd amounts of money to account for the month of slight discomfort caused by basic weather patterns that disrupt an otherwise idyllic climate. But in the meantime, as a short-term response to the obvious agony of the student body, the return of the ice skating rink and fake snow of last December would provide the perfect environment to break out our trendy winter fashions. Let us not forget the heartbreaking perspiration-on-Gucci-handbag incident of 2007.

While Pepperdine is continuing its multi-year project to renovate the campus piece-by-piece and improve living spaces for all students, prayers for air conditioning will likely go unanswered this year, leaving us to sit in our Mediterranean greenhouse and contemplate the next move.

Just wait, because by the time you are finished reading this editorial, the heat wave just may have ended, and with it the rise and fall of the bro tank and the spaghetti strap. If one thing is true, as Bob Dylan crooned, the times, they are a-changin’. Equally universal is the ability for the rich and the powerful to invent misfortune while residing in Malibu, Calif., whose only precipitation is the constant patter of complaint, annoyance and gripe among the school’s many disenfranchised students. Woe to those who trek daily to the CCB in search of refuge.

Dissatisfaction among the student body. Criticism. We at the Graphic protest the utter dismay we see every day, and we will not be satisfied until we see the world alter its course to better fit our vision for how things ought to be.