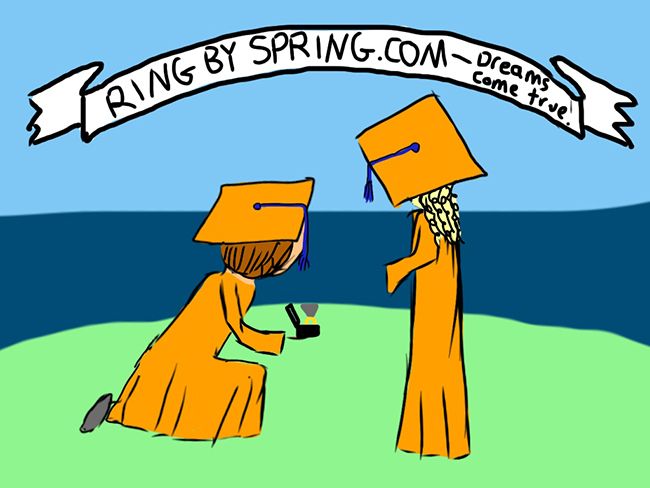 When you first arrive at Pepperdine, you are welcomed by painted, yelling students and a new sense of freedom. You’re handed your new, shiny ID along with expectations for which you may or may not have bargained. Your My Tie date is expected to open the door to either their heart or that of one of their suitemates. The desperate dash to receive a ring by spring has begun.

A 2001 study funded by Independent Women’s Forum found that “63 percent of college women hope to meet their spouse in college.” In spite of that, hoping to meet your spouse in college and hoping to get engaged before you graduate are two different circumstances. Pepperdine is not one of those universities that has a typical college dating scene. Everyone, including our own professors, understands that people typically don’t date at Pepperdine. People do, however, hope for and get rings by spring. So from where does the gap stem? Doesn’t someone have to date a person and get to know them before deciding that they would like to commit your lives to each other?

By this point most of us have heard the buzz around campus of the campaign to launch pepperdine.ringbyspring.com. This site is student-run and just 200 students need to sign up for it to launch. So far, only 87 students have registered, including one who has sent out a plea via the Pepperdine University Confessions Facebook page asking for people to sign up because she only has two months left to find a husband.

The real flaw with the Pepperdine site, and those like it, is not the fact that it’s a dating site for a specific community. The real flaw is its name and the meaning behind that name. “Ring By Spring” is a joke among many Waves, but for some the desire to get a ring by spring is reality.

Many of us know someone with online dating experience. According to an article published April 16, 2012, on hercampus.com, this dating scene is the third most popular way for single adults to meet besides school, work and introductions by family and friends. The purpose of this site, unlike other dating sites, is that it’s inherently focused on finding someone to marry and doing this quickly. The fact that the site became widely known in February is another part of the problem with its existence. It puts pressure on those who feel that they should have a ring by spring, especially women who are the traditional receivers of engagement rings. The timeline of engagement put forth by this site skips necessary steps in creating long-lasting relationships.

Entering a relationship where you expect to get a ring by spring is unhealthy to the growth and development of your relationship. Your focus will be to impress that person enough to get the ring, rather than truly getting to know that person in depth. Not to mention the fact that, as young adults with pressing financial concerns and student debts, marriage is a very costly investment at this time in our lives without stable employment yet.

For some, getting engaged before spring works. Usually though, these couples have been together for months or years. Most relationship professionals agree that it takes six months to get to truly know a person.

The pressures of marriage put on single students and couples lead to the possibility of a premature marriage or an unhealthy relationship. There is nothing wrong with being single and graduating that way. Being a single adult, especially a graduate, allows for time to get to know oneself as an independent adult. It allows time for that individual to develop into the person that is ready for a long-term commitment like marriage. How can you be a healthy half of a relationship if you do not know yourself?

Couples who have been dating for many months or years shouldn’t feel pressured to get married before they’re ready. You are in a romantic relationship with that person alone, not the surrounding people questioning why you don’t just get married already. You don’t need to rush to the altar to meet some time frame that others have set for you.

Don’t feel bound by the quest for a ring by spring. Independence allows growth, maturity and self-discovery. After college, there is still the possibility of meeting “the one.” In our four short years at Pepperdine we change significantly, and after graduation we change even more.

Whether you choose to spend these years changing by yourself or with a partner, don’t rush into things — particularly marriage or engagement. 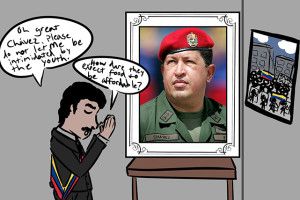 Art by Sacha IrickAs he stood at the base of a statue of Latin-American revolutionary hero, Jose Marti, in a plaza at the heart...
Copyright 2018 Pepperdine Graphic
Back to top