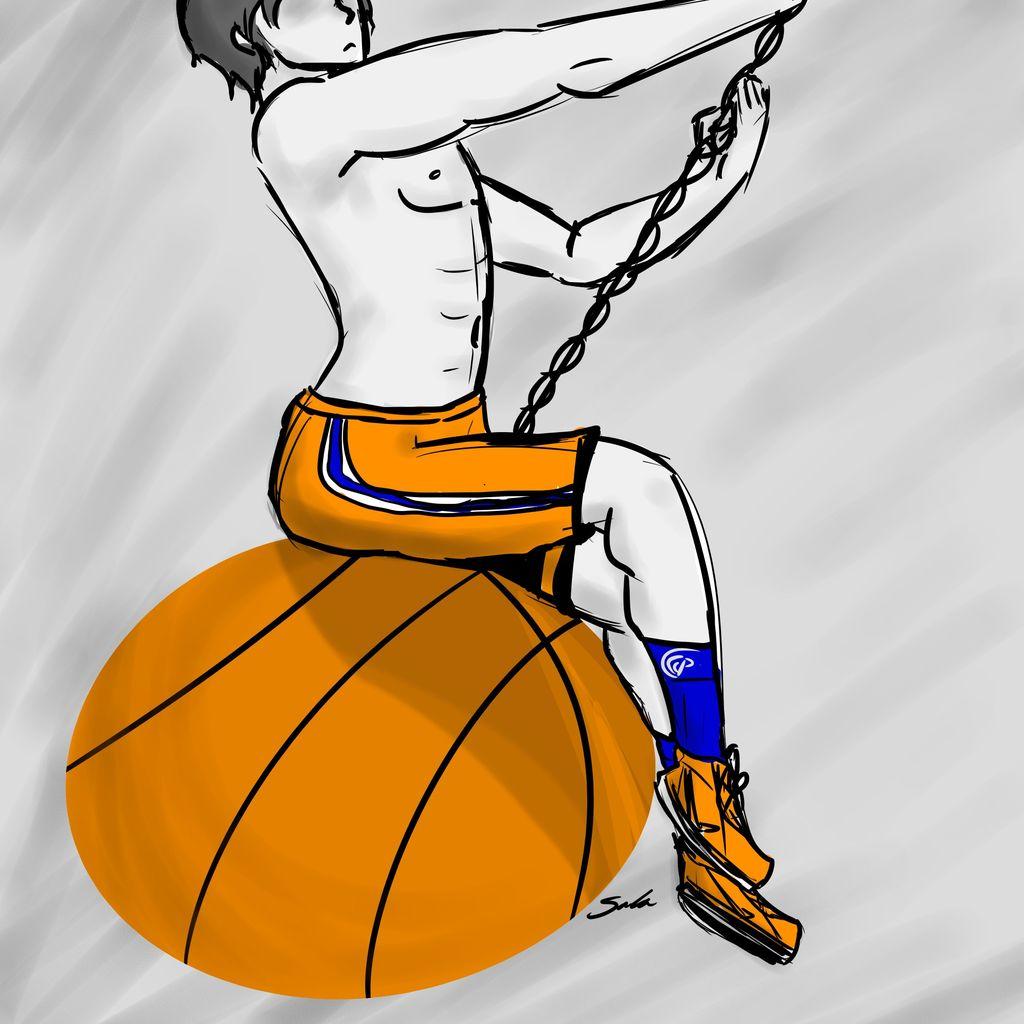 Attitude and branding of athletes are half the fun of spectator sports. The men’s basketball team debuted its 2013-14 season calendar at Blue and Orange Madness, and trust us: You’re going to want to grab one before they’re all gone.

But don’t forget that we have a women’s basketball team, too. Their stats from last year would be written here as well, except when you click “statistics” on pepperdinesports.com, it only reads: “The page you requested could not be found.”

Back to the posters.  The men’s basketball team showed off its ESPN Body Issue-esque modeling skills with intimidating poses in the weight room. The set-up is actually pretty great; each man wears a facial expression worthy of a gladiator awaiting battle. The players don tight tanks and T-shirts, some of which are stained with blotches of sweat (or perhaps baby oil) to accentuate their physiques. The team’s skin glistens, thanks to high-contrast studio lighting and enough Photoshop magic to make Annie Leibovitz proud.

The men’s basketball calendar is edgy and sexy. Athletics obviously took a risk with this type of editorial shot, and it worked.

In this state of shock and awe, you probably overlooked the women’s basketball calendar, and it seems like Athletics did too.

The women’s poster is nicely, unassumingly, symmetrically boring. The women got Alumni Park, Waves of Flags and all, in black-and-white, juxtaposed against the saturated orange of their uniforms. The combination of selective coloring, lackluster poses and the uninspired layout makes the girls look as if they were pasted onto the field and told to just stand there. They got two options: Arms crossed or hands on hips. Compared to the men’s team’s photo, the women look unengaged, which is odd considering our same university photographer took both photos.

The media often portray female athletes as sexualized, admiring them for their beauty and sex appeal rather than focusing on their athletic abilities and achievements — look no further than the Sports Illustrated swimsuit issue. But basketball is different.

In basketball, the NBA players are the ones with the GQ photoshoots in skinny ties and flatteringly fit slacks, while the WNBA players are awkwardly positioned in one of three ways: arms crossed, hands in pockets or hands on hips. Sound familiar? Those are the exact same poses the Pepperdine team chose. The Athletics photographer and communication department took a decidedly conservative approach with the women’s shoot, and the result is inconsistency in the school’s media for the gendered sport.

As Athletics revamps its website and amps up its social media presence, the equality divide only widens.

Men’s basketball hasn’t broken .500 in the WCC since 2003-04. The women marked 8-7 during the 2010-11 season. So why is Athletics so heavily underrepresenting the women’s basketball team?

If you want more proof, try searching the teams on Twitter or Instagram. Men’s basketball (@PeppBasketball) is an active handle that posts daily updates. They’re also smart about posting and liking on Instagram. The women were left with the obscure handle of @PeppWBKB and have yet to make their Insta-debut.

It’s in the little things, another being the pure contrast of enthusiasm from the announcer at the Blue and Orange Madness events in Firestone Fieldhouse. Even sitting near the amphitheater or outside the Caf, we’re accosted by the men’s basketball team’s backsides in a vinyl banner covering a wall adjacent to the Pendleton Learning Center. It’s clear what the flagship sport is, but the game calendar makes a joke out of the women’s presentation.

The men’s basketball team is everywhere on campus, and we’re not complaining. But women in sports already suffer from inadequate representation in the media. Despite the impact Title IX provisions had on women’s sports and their publicity, discussion and media coverage, women’s basketball on campus is no different from the professional realm. So, how is Pepperdine supposed to evolve women’s basketball past the media and fans’ glass ceiling? The serious answer is that it’ll take time. The “old boys club” sports mantra runs too deep to fix forthwith. In the meantime, we could all pick up sledgehammers and try breaking through the ceiling by force.

Be sure to support women’s basketball in their next home game on Nov. 14 at 7 p.m.