So Does This Mean We’re Gonzaga Fans? 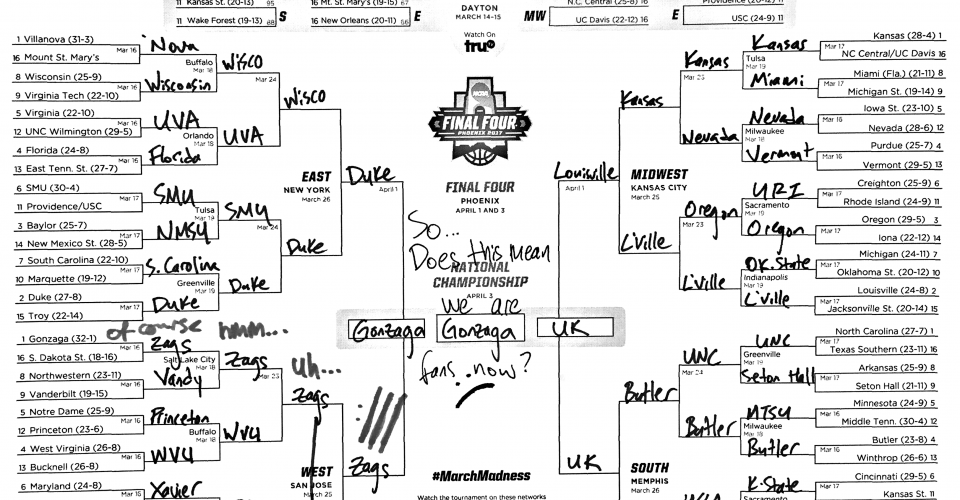 Waves fans: Don’t let the bracket distract from the fact that Pepperdine is not one one of the 142 Division I schools that will play another game this season in everywhere from the National Invitation Tournament, College Basketball Invitational, or the CollegeInsider.com Tournament, to the big shebang, the NCAA Tournament.

More likely than not, most fans’ 2016-17 season ended with a first-round loss in a conference tournament and a large number in the L column. For Pepperdine and 208 other fan-bases, the most exciting time of the college basketball season can be an aimless sojourn across channels of college basketball, without allegiances or a team to back.

This raises an interesting dilemma for these fan bases: Is rooting for their conference foes worthwhile? Would it be sacrilegious for a West Coast Conference fan to root for Gonzaga or Saint Mary’s — even though they pulverized their team in the regular season? And what if there’s more at stake to supporting any old team than winning your office’s bracket competition, bragging rights, or the thrill of becoming pointlessly invested in a team’s postseason performance?

The latter sentence becomes interesting for mid-major programs who didn’t make the postseason. Regardless of how any NCAA Tournament team fares, everyone’s a winner — and this isn’t a cliche about how the fans are the true winners of March Madness, or how every student athlete who participates in the games will gain a priceless, character-building experience.

The reality is: There’s money on the line for small conference Cinderellas. If a team from the West Coast Conference makes it to the Final Four (cough cough, Gonzaga!), it’ll also earn money for the WCC as a whole thanks to the NCAA’s television deal. The money will then be distributed evenly amongst the ten teams for their athletic funds. Hooray!

So without further ado, here’s a spectrum of involvement for for WCC fans, ranked from least involved to most.

Fan A: Root for the Conference — no matter what

Rooting for the success of the conference as a whole is an effective way of winning over sportswriters, striking fear in the hearts of other conferences and maintaining the Basketball Juggernaut #brand. Why pick and choose? Why have one or two phenomenal teams beat up on a bunch of bottom-feeders, when having nine or ten really good teams with the potential to beat each other on any given night is also a possibility?

Besides, most college fans know that the worst fate in March is not only losing in the first weekend of the tournament but also having the legitimacy of the entire conference questioned.

Fan B: Never root for the Conference teams

Blinded with an unyielding love of one’s team and an unquenchable hatred for everyone else in the Conference, fans in this category likely spend March Madness bandwagoning for any team that squares off against their archenemies. To WCC fans in this category: Congrats! You’re now the biggest South Dakota State fan on this side of the Rockies.

In a nihilistic sort of way, this school of thought makes sense. But at the same time, being blinded by anger isn’t the most informed or civilized stance (or safest way to ensure wins in the bracket pool — good luck with that Northwestern over Gonzaga pick).

Fan C: Root for the Conference teams, as long as it’s not Conference play

Clearly, the biggest difference between this fan and Fan A is that this person can still commit to a team and have the College Fan Experience(TM).

Fan D: Only root for the Conference teams in the NCAA Tournament

The “only in the NCAA Tournament” caveat is small but important; the limitation could also imply that not rooting for Conference teams in the non-Conference, early-season games is still on the table.

On one hand, this fan would be completely reasonable. People who fall in this category have all the benefits from Fan A, while still maintaining Fan C’s spirited fandom during the bulk of the season without sounding like the nihilistic Fan B.

In this instance, fans can have their cake and eat it too — even if the cake is kinda stale, or maybe not the flavor of choice, at least it’s still cake, right?

But consider the flip-side: Hearing a diehard Ohio State fan say, “Well, I loathe that school up north, but it would really be in the best interests of the conference if Michigan beat Oklahoma State,” an ASU fan cheering for Arizona to #BackthePac, or an Illinois State fan to suddenly be fond of Wichita State after the Shockers stole their spot in the tournament sounds unnatural.

Duck fans, it's that time of year to #BackThePac. Root for @USC_Hoops in the First Four and then @APlayersProgram and @UCLAMBB this weekend!

It’s a great, sportsmanlike gesture, but it seems so wrong.

Speaking of things that are wrong, a cynical reason for backing conference teams in tournament play is the money. Hate to reveal the man behind the curtain, but the more games a team appears in, the more money said team’s conference makes.

At the end of the day, the NCAA Tournament is just 67 2-hour television events starring 68 teams of roughly 13, 18-to-23 year-old athletes; who run up and down a 94-foot wood surface in order to see who is the best at tossing a synthetic leather sphere through a steel cylinder in a 40-minute window — all in the name of amateurism, the love of the game, gaining educational opportunities outside of the classroom and fattening the pockets of a handful of middle-aged, white men in suits. The NCAA Tournament isn’t too important, right?

The bulk of the money comes from television appearances. Although power-five conference schools like the SEC earn the bulk of their revenue from its football teams’ television appearances — which is a different can of worms — the ACC earned more than $30 million from the NCAA Tournament because six of its seven teams made the Sweet Sixteen, according to ESPN Senior Writer Darren Rovell’s column, “ACC stands to make more than $30 million from NCAA tournament run,” published March 21, 2016.

Granted, the $30 million figure looks staggering, but the NCAA parcels out these appearance checks over the span of six years, according to Will Hobson’s Washington Post article “Fund and games,” published March 18, 2014. For those keeping score at home, this also means that the Patriot League and the Atlantic Sun are making money for Lehigh and Mercer upsetting Duke in 2012 and 2014, respectively (Beating Duke: The gift that keeps giving). The craziest part about all of this? Mercer isn’t in the Atlantic Sun anymore. They’re in the Southern Conference.

Because of the six-year spread, teams can double-dip with NCAA tournament earnings; despite making the tournament this year, Florida Gulf Coast is still getting checks from its Dunk City days in 2013. Similarly, this also means that Gonzaga has put the WCC on its back by earning money in every NCAA tournament since 1999.

The incentive to win (or at least appear in) NCAA Tournament games is much higher for mid-major schools, as said appearances will probably be the conference’s major source of income.

Whether they like it or not, prize money will have a significant, albeit behind-the-scenes impact on fans of quality mid-major conferences, such as the Missouri Valley Conference, West Coast Conference or the Atlantic-10. Of all the mid-major conferences, these three have the most to gain from the tournament; the latter two have multiple opportunities to cash in on appearance checks, and although the MVC has only one representative in the Wichita State Shockers, Gregg Marshall’s crew has won at least one tournament game in the past four years, according to sports-reference.com.

All in all, it’s reasonable that West Coast Conference fans will swallow the bitter pill of rooting for Gonzaga just so the WCC can earn more money. A Gonzaga Final-Four run would do monetary wonders for the conference’s athletic departments.

Fan E: Screw Gonzaga and Saint Mary’s! They crushed my team in an embarrassing fashion on my home turf, so I want to see them lose in order to bring balance and justice to the universe

Pepperdine Raises Over $500,000 During Give2Pepp 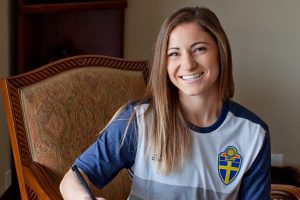