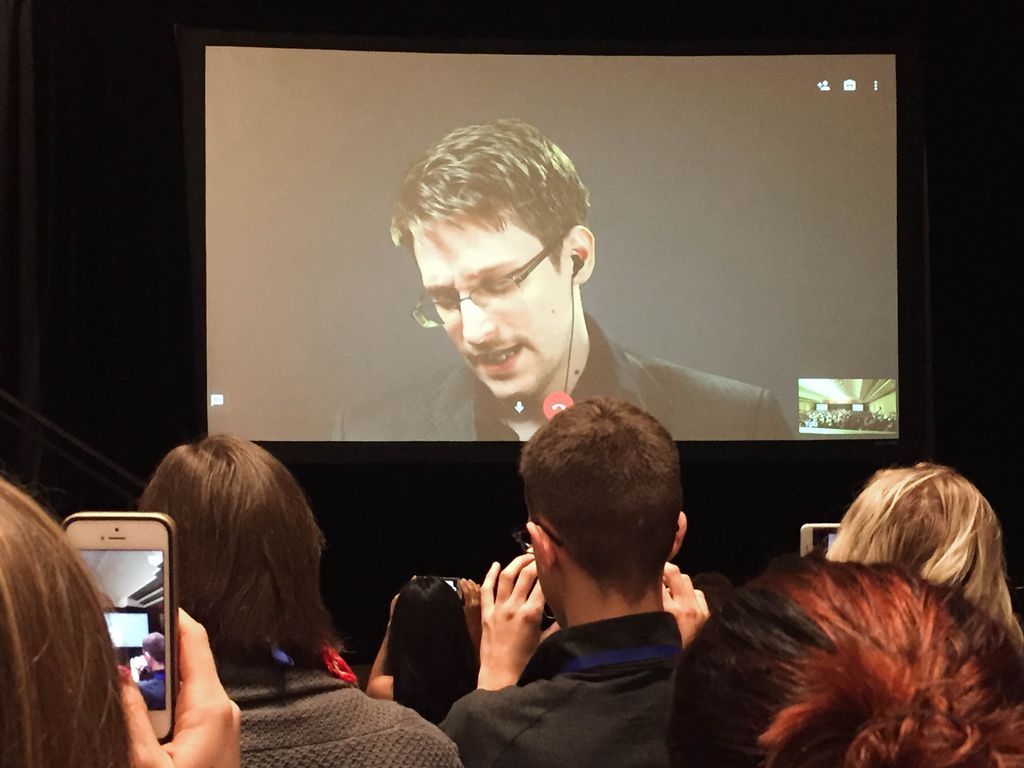 Journalists have a responsibility to protect the people’s rights from the government as the “Fourth Estate,” Edward Snowden said. On Saturday, the Associated Collegiate Press gave students the opportunity to speak with another advocate of the rights of private citizens at their journalism conference in Washington DC: Edward Snowden.

Approximately 1,300 student journalists from all over North America relentlessly snapped pictures and live tweeted Snowden’s speech from the floor or the edge of their seats. To the rhythm of flashing cameras, Snowden laid out his reasoning for outing the National Security Association (NSA) in 2013 for “seizing the private records of billions of individuals not suspected of wrongdoing,” according to the ACP DC program schedule.

“This paradigm of technological advance means we don’t have to discriminate like we used to [when it comes to surveillance]” Snowden said. “This isn’t science fiction – it is happening now.”

The NSA’s decision to monitor private citizens without their permission was a violation of the 4th Amendment of the Bill of Rights, as confirmed in Smith v. Maryland, Snowden said. The fourth amendment states, “The right of the people to be secure in their persons, houses, papers and effects against unreasonable searches and seizure shall not be violated, and no Warrants shall issue, but upon probable cause, supported by Oath or affirmation, and particularly describing the place to be searched, and the persons or things to be seized.”

“Where do we draw our borders around our rights?” Snowden asked.

Snowden was originally an anonymous source for the Guardian’s breakout piece about the NSA June 5, 2013. He said he “didn’t want to be the story,” but “a tool of disclosure.” Four days later, he revealed his identity via video, according to The Guardian, and said that he does not regret his decision, but that he felt the choice helped him gain “proxy” back because he was “conquering the beast.”

Snowden said he found it remarkable that he, a high school dropout with a two-year degree from Anne Arundel Community College, was able to keep his heist of NSA information a secret from the CIA until newspapers published the information he leaked. Later, when asked by the keynote’s facilitator Ron Johnson whether he hid NSA files in a Rubik’s cube as he did in his namesake film, Snowden did not confirm or deny as he is still under indictment. He did say that guards were used to seeing them around the office as he used to give his colleagues Rubik’s cubes as presents.

Snowden’s decision to expose the NSA’s unwarranted surveillance prompted “the most significant reforms to US surveillance policy since 1978,” according to the ACP DC schedule. From outside of the United States, Snowden continues to advocate for human rights with the same tool the NSA used to take spy on American citizens: technology. The former IT worker pointed out the need to invent “better, more expensive surveillance” as it was in the past to preserve privacy and to “ensure that liberty is a commonplace environment.”

Snowden also challenged future journalists to live up to their “fourth estate” responsibilities, as the government is “pursuing a trust that no longer exists,” Snowden said.

“The government is more concerned with protecting political orthodoxies, rather than the public’s safety,” Snowden said.

Further prompting journalists, he pointed out that while getting exclusive stories is good for progressing their careers, writing stories about real people is essential for the public.

“Writing is the ultimate source of technology,” Snowden said.

Snowden concluded the second half of the keynote with an open Q&A, cueing a mob of college journalists to sprint to an open microphone. One collegiate journalist asked Snowden how he is able to “stay out of the drama” and “live as a person.”

Snowden said he knows the path in front of him might not be easy, saying he may not ever be able to return to the United States.

“I don’t know if I’ll ever be able to return home,” he said.