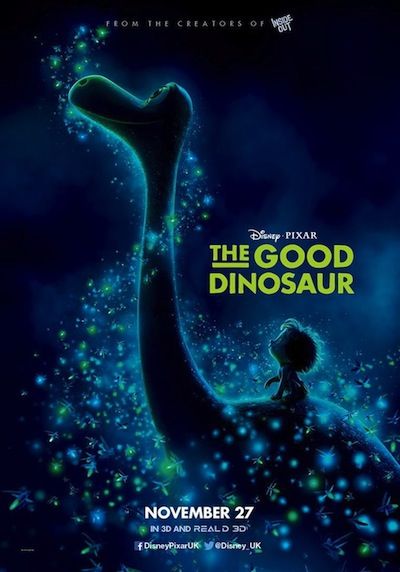 Trust me: You’ll want to push back the Black Friday shopping for a few hours to see Disney Pixar’s newest sensation, “The Good Dinosaur,” this Thursday evening.

An unlikely friendship between an inept dinosaur, Arlo, and a spiky-toothed cave-boy named Spot can move you in a way you did not know you can move. If you love Disney movies or simply have some functioning heartstrings, “The Good Dinosaur” is yet another one for the books.

Set back a few million years, the story is about Arlo, the runt of the dinosaur family next to his sister and brother, who resembles a crossbreed of Yoshi and Gumby. Instead of going extinct, dinosaurs evidently evolved to civilized, cowboy-esque ranchers who own chicken coups and harvest grain. I didn’t think to question it during the movie, so hopefully you won’t either.

Arlo is fearful, clumsy and more than likely severely concussed after the amount of times he hits his head in this film. It’s a classic “If you try and don’t succeed” paradigm, and when Arlo is lost and far away from home, he has to dino-man up and conquer his fears. The precious friendship between Spot and him blossoms on this journey.

Ironically, the human boy is treated like the dinosaur’s pet. Arlo names him and speaks English to him while Spot barks, pants and howls like a dog. Due to the lack of dialogue that can happen between the two, the writers threw in a few Jurassic gypsies along the way who are quite random but nonetheless further Arlo’s character development as he is challenged to be courageous.

No matter how little one plans to emotionally invest in an animated film, Disney will never fail to sucker-punch your tear ducts when you least expect it. The movie seemed safe enough. The only dialogue in the entire two-and-a-half minute preview is, “Hello?” — honestly, how sad could it be? How much emotional impact could a kid’s movie about a barking child and an incompetent dinosaur have?

But of course, this film is coming from the creators of “Inside Out” and “Finding Nemo” — the kind of people who take pleasure in whacking the gong of vulnerability buried deep inside. They rip Band-Aids off tender subjects such as family ties, loss of youth and personal failure like it’s an Olympic sport. Well, you’ve done it again, Disney.

Visually, it is unreal just how lifelike the animation is. Apart from the characters being a bit cartoony, the landscapes (the rivers, the storms, the colors) are breathtaking. There are two really good take-home messages for those of all ages: 1. Family is important. 2. The difference between the courageous and the cowards is not the presence of fear, but the determination to overcome it.

Here’s what not to do with “The Good Dinosaur”:

Do not draw too many parallels with adventure, journey-home children’s movies. (Example: “Ice Age,” “Finding Nemo,” “The Lion King,” etc.) The game will just keep going until you spoil the fun of everything.

Do not forget your tissues.

Do not forget to download the soundtrack, scored by brothers Mychael Danna and Jeff Danna. It is wonderful — like a children’s version of “Lord of the Rings” and “Braveheart.”

Do not start asking questions about historical accuracy. I mean, I am no paleontologist, but I’m pretty sure humans and dinosaurs were never best friends back in the good old dinosaur days. And that’s OK.

Do not be the person that makes that not OK.

Do not forget to buy one of the stuffed animal dinosaurs that I am sure will be hitting the marketplace soon, if they haven’t already.

Even those who are not children and have no interest in the mesozoic era can enjoy “The Good Dinosaur.” The movie will be in theaters nationwide this Thanksgiving, Thursday, Nov. 25.