Shout from the Rooftops 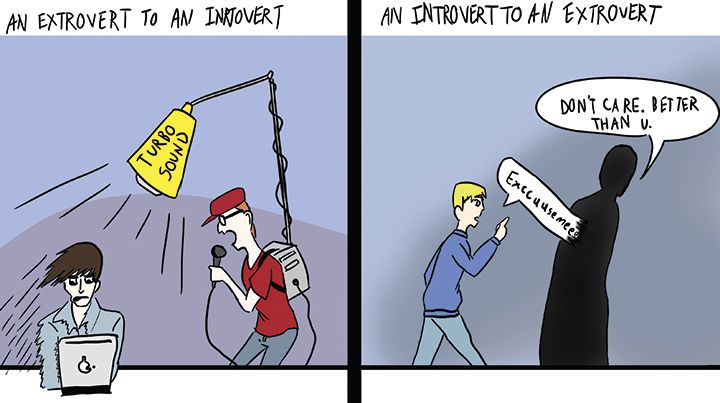 I think there is a supreme misconception about being an extroverted individual. Yes, we may sometimes be too loud and crude when we talk too much, but we all didn’t start out that way. At least I know I didn’t.

The extroverted gene crept up on me during my adolescence while I was too shy to ask a waiter for ketchup or introduce myself to others, and it slowly revealed itself. Little by little, I engaged strangers and my voice got a little bit louder and carried through loud rooms, and then it hit me. I am an extrovert.

When determining if you’re an extroverts the Myers & Briggs scale asks you, “I like getting my energy from active involvement in events and having a lot of different activities. I’m excited when I’m around people and I like to energize other people. I like moving into action and making things happen. I generally feel at home in the world. I often understand a problem better when I can talk out loud about it and hear what others have to say.

The following statements generally apply to me:

I am seen as outgoing or as a people person.

I feel comfortable in groups and like working in them.

I have a wide range of friends and know lots of people.

I sometimes jump too quickly into an activity and don’t allow enough time to think it over.

Before I start a project, I sometimes forget to stop and get clear on what I want to do and why.”

The first time I realized it, my insides clammed up and I felt the toxins running through my veins. Commonly, I tried to justify it by saying, “I really don’t like people that much” or “I don’t need constant attention,” but I knew that was a lie.

I crave the spotlight, when people turn to me, I’m immediately validated. There are people out there that try to tell others that being an extrovert is equivalent to living as a “Toddlers and Tiaras” child, but they’re wrong. Here are five reasons being an extrovert is the greatest thing that could happen to the world.

This is beneficial because people always know what I’m thinking. What’s the point of beating around the bush or being elusive when the white–hot honest truth can just fall out of your mouth? Being an extrovert doesn’t give you the right to be unnecessarily cruel, like some of the comments of the late Joan Rivers, but people realize you have absolutely no shred of a filter.

Introverts may argue that you never truly finish anything, but extroverts know we’re always moving on to the next big thing. Some of the most influential people of all time were extroverts, from Bill Clinton to Margret Thatcher to Steve Jobs to Marie Antoinette.

Extroverts are extremely outgoing in our personalities, and commonly flock like seagulls to any social gatherings. The promise of mingling with new people, is too thrilling to pass up. Usually, this leaves extroverts with incredibly fascinating stories from being exposed to a variety of different situations. We then use those stories to command the room in turn.

Friends of extroverts may think they are the most worldly people because even Mondays aren’t safe from crazy encounters. Because of this phenomenon, extroverted individuals have an increased quantity of interactions, which often results in the learning of social skills at a faster rate than introverts.

The constant craving for social interactions means that extroverts have a wider circle of friends and may seem like they know everyone. We social butterflies just have to spread our wings at get–togethers and mingle with every last single person at the event.

So, if you’re dating an extrovert, pull up a seat and download an audiobook, because you aren’t leaving anytime soon.

“It’s not about what you know, it’s who you know”

In the same vein, extroverts have an amazing network and always have a source of connections. While we may not be as stereotypically book smart as introverts, our street smarts and ingenuity will get us anywhere. While the phrase “fake it till you make it” may be a cliche, it’s rooted in truth somewhere. As extroverts, we may not be the most talented, but we’ll use all of our resources and work the hardest for our goal. 50 Cent would call us the term “straight hustlers,” but I digress.

Introversion: A Blessing in Disguise

The meek shall not inherit the Earth

Introverted individuals who are more socially inept are consequentially at risk for future health problems. According to meta-study released by Brigham Young University and co-authored by Julianne Holt-Lunstad, Ph.D. written in a Forbes article, “Those with adequate or high social relationships — friends, family, neighbors or colleagues — were found to have a 50 percent greater likelihood of survival than their friendless counterparts.”

Going further, the article says introverts’ lower level of social interactions are “as bad for [their] health as smoking 15 cigarettes a day,” “as dangerous as being an alcoholic” and “as harmful as never exercising.”

In short, we extroverts own the world not only because we comprise approximately 75 percent of the population, but also because we’ll outlive introverts. Talk about the Dark Side.

Ultimately, my fellow extroverts, please go forward and remember you are changing the world one conversation at a time. You may be too loud and some people may think you’re annoying, but remember, you’ll outlive the haters anyway. You are the 75 percent. 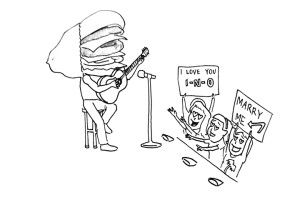