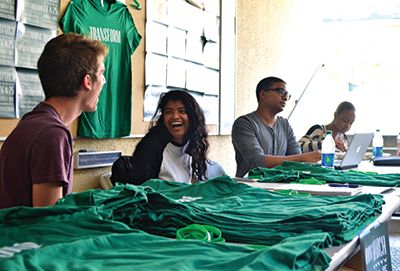 The Office of the Chaplain and the Dean of Student Affairs will be hosting “Transforming the Conversation,” an event that will discuss multiple views of homosexuality in the context of the Christian faith on Monday and Tuesday.

According to Associate Chaplain Jennifer Christy, this two-night series seeks to address the questions, issues, disagreements and dialogue many Christians have when biblical texts, spirituality and homosexuality collide.

Although there have been “Transforming the Conversation” events over the past three years, the format of this semester’s discussions will highlight the opposing views of friends Justin Lee and Ron Belgau as they dissect Romans 1 as it relates to homosexuality and examine how to use social-conscious discourse in LGBT-centered conversations.

Christy said the men’s opposing views will make for an interesting conversation, as Lee believes homosexual Christians are called to be in monogamous relationships, and Belgau thinks they are called to be celibate.

In the “Transforming the Conversation” event held two years ago, Lee and Belgau presented each other’s topics, but this year, the format of the event will differ slightly.

“Night one is about how do we have this dialogue,” Christy said. “How do we maintain our Christian convictions but have this dialogue with people whose beliefs differ from ours? Night two is looking at the Bible … How does [the Bible] shape and inform our perspectives?”

To spark stimulating dialogue, both Lee and Belgau will be interpreting Romans 1 from their unique perspectives to show points of overlap as well as points of disagreement. The second night, President of Fuller Theological Seminary Dr. Richard Mouw will be leading a discussion on how to engage in civil dialogue with those who have opposing views, while maintaining personal convictions.

“The whole point is that they’re friends,” Hylton said. “Even though they’re gay and Christian and have completely polar opposite beliefs, they’re still able to become friends.”

Last semester, while SGA and Hylton were gaining support for more LGBT-centered events around campus, the Chaplain’s Office reached out to them about partnering up to promote the “Transforming the Conversation” series. Since then, Hylton said SGA and the Chaplain’s Office have been working together to make the event larger than originally intended.

When discussed in unison, the topics of faith and homosexuality can cause tension, especially on a Christian campus. Many students believe it is a conversation that needs to occur to address the social issues of our generation. “A lot of times, I get frustrated with people because the way I view [social] issues and the way I look at faith completely coincide and flow in and out with one another,” sophomore Paige Wandling said. “We’re a very progressive generation … but I don’t think people understand that there is such a thing as progressive Christianity.”

Hylton said he didn’t deny that it’s a touchy subject. “I think [Pepperdine] wants to make sure that it’s done in a well-executed way,” he said. “I think it’s a good way to kind of sample it out and let it build and just make it a casual growth rather than trying to make an abrupt change.”

SGA has tabled outside of the Tyler Campus Center every day this week from 11 a.m. to 2 p.m. to raise awareness for the event and to promote student involvement in the LGBT conversation. To further boost student participation and share the opinions of those who attend the event, Hylton said the rock will be painted, and passers-by will be able to write how they intend to “transform the conversation.”

“I think they’re showing that they want to care about the topic more,” Hylton said. “In the past, Pepperdine wasn’t ready for an [LGBT] group, but they’re not shutting it down completely. It will take time.”

Staff, faculty, alumni and graduate students are able to reserve seating online through the Office of the Chaplain webpage, but because the event will be offering convo credit, it will be a first-come, first-served basis for undergraduates. “We had several meetings about [convocation credit],” Christy said. “Everything is trickier when you offer convo credit … so this was the best way to be able to accommodate everyone.”

Director of the Center for Entertainment, Media and Culture Craig Detweiler will host the event. He will also take part in the dialogue and ask questions throughout the two nights. The video stream from both nights will be available on the university’s online site after the event has taken place.