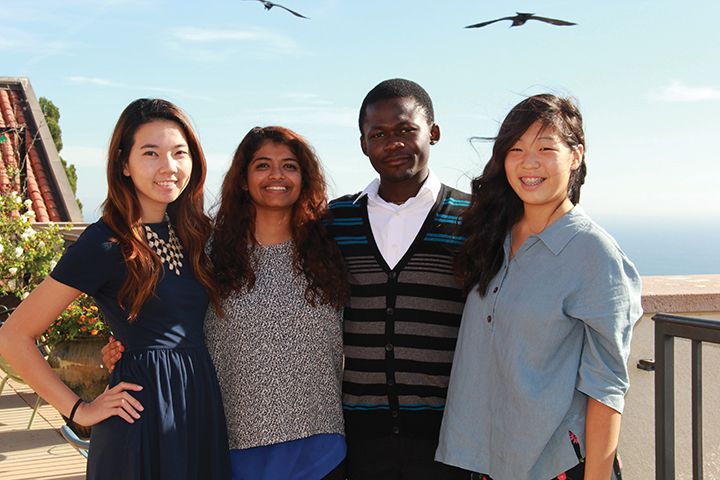 Four recently elected student representatives have begun their reign as SGA presidents. These are their stories.

They were elected to their class by their peers. But it is their lives outside their Student Government leadership roles that may explain why they have won the approval of their fellow Waves.

Each of these SGA class presidents have specific spots on Pepperdine’s campus where they often reflect about the week and the work that they do for the student-run entity. Freshman April Chung, sophomore Edward Adutwum, junior Nancy Kannampuzha and senior Elizabeth Yang make up the SGA class president team for the 2014-2015 academic year.

Chung said coming to Pepperdine was a miracle in itself because it was unclear at the time if her financial aid was going to come through or not. She said she is passionate about being here and wants to do anything that she can do to get the student body integrated. “I love people–probably why my major is communication. I want to be around people who are just as passionate as me. That’s why I chose to be involved with SGA,” Chung said.

Chung’s passion is apparent in her planning of the Freshman Town Hall meeting, which will take place on Oct. 27.

“In high school, it’s easy to fake passion. But in college, you’re in it because you actually want to be. It’s uplifting that everyone has that mindset. SGA has helped me prioritize a lot this year. It has helped me reevaluate and narrow down my interests in what I want to do at Pepperdine,” Chung said.

Not only does she say she thrives off planning and pursuing goals with SGA, but Chung is also a pianist who is often found practicing in the music room — one of her favorite places at Pepperdine, where she often takes time to reflect and plan her week.

Adutwum, who hails from Hyattsville, Maryland, is a political science major who has aspirations to be a diplomat in the future and knows that with his work with SGA is one of a worthy cause because he said he enjoys serving his peers and advocating for them.

Also known as “Ed Ad,” he served as a freshman senator and became involved with SGA because he said he believes that it is through policies that student experiences can be improved. “I think of this as a chance to be the Man in the Arena because it gives me the opportunities to show great enthusiasm for a worthy cause for my class by representing their interests to the administration,” Adutwum said.

Heroes Garden is the place where he said he best finds solace. “I encourage people to go there during sunrise and meditate there, when the early morning light hits the garden,” Adutwum said. When he’s not meditating he can often be seen swimming in the pool to relieve stress or hitting forehands on the tennis court.

Kannampuzha hails from Los Angeles and is an avid fan of hit TV shows “Scandal” and “Once Upon a Time.” She said she knows that being involved with SGA is the best way to promote change around campus. This year, she said she aims to unite and promote community, specifically among the junior class. “It’s the first year that we are all back together since freshmen year and we want it to be memorable,” she said.

Kannampuzha believes that SGA is the liaison between Pepperdine administration and the students. She encourages students to speak up about what they see. When students see issues around campus, the elected representatives can advocate alongside the students and pass these concerns to administration for solutions.

“The policies and initiatives come from the student body and we devote ourselves to making sure that your needs and concerns are being addressed. SGA is the voice of students,” Kannampuzha said.

Yang is an international studies and management major who recently just learned how to sail and enjoys finding new coffee shops in both Santa Monica and Venice.

Yang said she is an advocate for long-term SGA goals. She pointed out that one of her specific goals is to start the process of bringing an academic and intellectual forum to Pepperdine. “I hope that this forum will allow for students to engage with people that are innovating the U.S. and the world,” Yang said.

No students concern is too large or small for Yang, who said she takes both just as seriously. “We take everything we hear from fellow students very seriously. Whether it’s about library hours or kale in the Caf, we think everyone’s concerns are important!” Yang said.