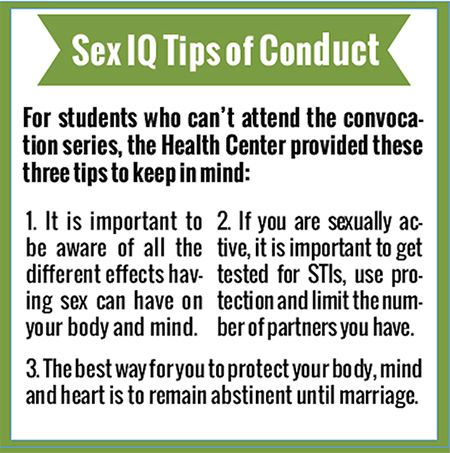 Sex can be a topic that is easily overlooked or dismissed, but Sexually Transmitted Infections or STIs, present a problem that cannot be easily ignored.

Each year for the past six years, students have had the opportunity to participate in a convocation series called Sex IQ, where questions about sex and its consequences can be openly discussed. The last one this year was Tuesday.

This convo series is intended to “educate students about their sexual health, provide information about Sexually Transmitted Infections (STIs) and ways to keep them safe,” Health Center Physician Assistant Jennifer Ehteshami wrote in an email. “National institutions such as the American College Health Association and the Center for Disease Control recommend sexual health education to the college age group because this age group [18 to 24 years old] has the highest incidence of STIs.”

The Health Center has sponsored the Sex IQ for the past six years, and as a result, “students have reported on their post-presentation surveys that information provided either encouraged them to save sex for marriage to eliminate the risk of STIs and pregnancy or to be more careful by using protection during sexual activity. The SHC has seen an increase in appointments for STI screening after similar convocations,” Ehteshami wrote. 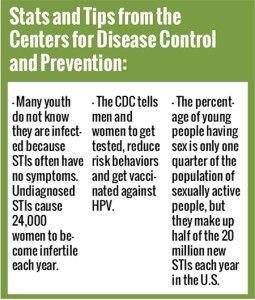 As a Christian Univeristy, Pepperdine does not condone sexual relationships outside of marriage. As the handbook states, “Therefore, as a matter of moral and faith witness, all members of the University are expected to avoid such conduct themselves and to respect this understanding of sexual relationships.” However, the Health Center still views it an important topic to discuss.

“Convocations on topics like this are always a good idea as it is incredibly important for students to be aware of potential dangers as results of their actions,” freshman Christan Cossa said.