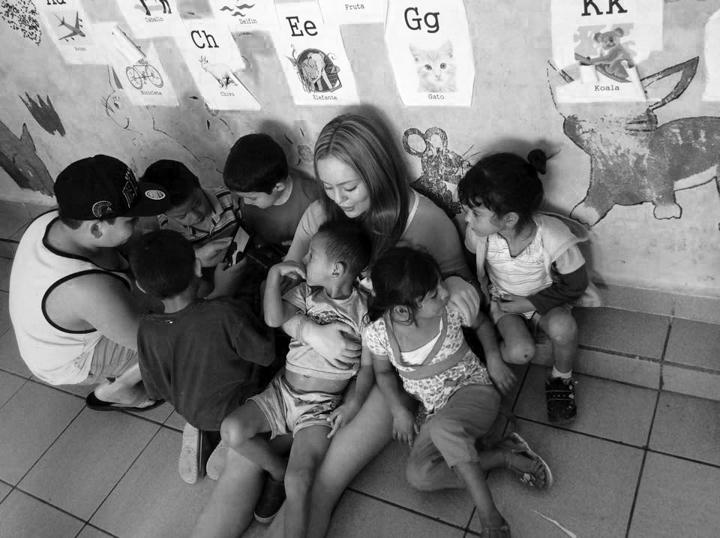 Senior Pia Anderson works with children in Puerto Vallarta as a part of her nonprofit organization, Para Ti Global. Anderson founded this organization with her brother, Luke, to aid communities in Mexico and the Philippines. Photo courtesy of Para Ti Global

This is for you.

These are the words from a young Mexican boy in 2014 that have stuck with Pia Anderson, a senior Biology and Spanish major. On a family vacation, Anderson and her brother had just finished giving out ice cream to children in a community living inside the city of Puerto Vallarta’s dump when the young boy came back up to Anderson and offered her his ice cream.

“I was someone who was coming from great opportunity and great privilege,” Anderson said. “And he had saved his cup of ice cream for me, because he wanted to demonstrate his selflessness and generosity.”

His act of kindness touched her and she began fundraising for the area when she arrived home. When she saw the support from her community in Northern California, she started her nonprofit organization “Para Ti Global.”

Anderson’s organization is just one example of service to other communities. Many Pepperdine students volunteer with nonprofit organizations or participate in service projects and mission trips to help those in need. Each instance looks different in the shape they take and the duration, and there are often a lot of ethical questions to navigate on how to help and not hinder those in need.

While helping others usually receives praise, critics often point out the unequal power dynamics in international and domestic missions that can taint the experience. Often this is called a “white savior complex.”

The white savior complex “is about having a big emotional experience that validates privilege,” Teju Cole, a Nigerian-American writer and photographer, wrote in an article for The Atlantic. This action can be conscious or unconscious.

“Any kind of ‘savior complex’ is a mission disaster,” said John Barton, director for the Center of Faith and Learning, Religion professor and a former missionary. “No matter how well-intentioned people or projects might be, when we overestimate our own importance and motives, mission is undermined and damage is done.”

The white savior complex can come into play whenever foreign characters come in and decide what is best for the situation without asking the people living directly in the area.

Rodriguez said the phenomenon of the white savior complex is still around today.

“And it’s alive and well because of our ethnocentrism in this country,” Rodriguez said.

Ethnocentrism is the concept of evaluating another’s culture based on preconceptions from one’s own culture.

Rodriguez said white saviorism is common when Americans make suggestions for what they think is best for the community when in actuality the community needs something more fundamental.

Americans often center their own cultural background, Rodriguez said, and have trouble separating their Christian identity from their identity as U.S. citizens. The Bill of Rights includes separation of church and state, but many people believe America is a Christian country.

“It’s done very consciously in this country,” Rodriguez said. “We bring these symbols together, a cross and a flag, so being American is almost synonymous with being Christian.”

Fully Christian missions have to meet a standard, Barton said.

“Whatever someone’s motivations or intentions are, mission can only be considered Christian if it is done in God’s way,” Barton said. “And Jesus gives us the standard for that.”

He referenced Matthew 7:12 which reads, “In everything do to others as you would have them do to you.”

“The ‘everything’ in that command is comprehensive and so includes all forms of mission,” Barton said. “Among other things, this means that true mission cannot be self-serving, coercive, manipulative or disrespectful of others.”

“From the perspective of Christian faith, mission is not something we initiate or do, it is something God initiates and does,” Barton said. “Mission is God’s. So our main task is just to be attentive to what God is already doing in the world and discern through the power of the Holy Spirit how we might participate or contribute.”

Rodriguez, who teaches courses in ministry, has been on many Christian mission trips focused on building relationships with communities in Honduras and China.

In 1999, Rodriguez organized a humanitarian-focused Christian mission. He put together a month-long International Program trip to Honduras, with Pepperdine students helping the community build a clinic in response to a hurricane that hit the area.

“That month with those 12 students was just incredible,” Rodriguez said. “They were pushed so hard. It was so hot and uncomfortable. Nothing like going to Lausanne or Florence or Heidelberg.”

When planning a short-term mission, Rodriguez said, organizers should remember to be good neighbors.

“Are we going to all stay in a nice three-star hotel? Or are we going to stay in the homes of local people,” Rodriguez said. “What are we going to eat? Who’s gonna prepare food? Good short-term missions are thinking about being good neighbors.”

Rodriguez also participated in a trip to China that focused more specifically on evangelism, where the group spent eight weeks teaching English at a language institute.

“[The institute] was run by a faith-based nonprofit, and our students were involved in teaching English as a second language as a way to introduce them to this community of believers,” Rodriguez said.

A Korean church created the institute as a mission outpost. Rodriguez said the teaching of English was the first step in leading those people to have conversations within the small Christian community.

Barton said he has been privileged to participate in partnerships for justice and development for close to 30 years in different parts of the world.

“I am humbled and grateful for those opportunities,” Barton said. “And while I have always tried to give what ‘loaves and fishes’ I have, I have always learned more than I have taught, and been both challenged and blessed by those I have had the privilege to partner with.”

Barton currently sits on the board of a nonprofit that he and his wife, Chaplain Sara Barton, helped found, “Kibo Group International.” The organization emphasizes empowering the on-the-ground work of Kibo’s East African leaders and partners, who work with communities in Ugandan villages and rural communities in Busoga, according to the KIBO USA website.

The work of the organization is focused on helping local leaders address community needs rather than bringing answers to them. “Kibo is not a charity that provides answers but a network of friends that helps communities ask good questions,” according to the website.

Anderson’s nonprofit also works to address local needs by actively communicating with local leaders and volunteers that are located in the area.

Before the COVID-19 pandemic hit, Anderson said her family would take four or five trips a year with the organization to work on the nonprofit projects in person. They have branches in Mexico and in the Philippines, though they have not been able to visit the Philippines in several years.

“[It’s] due to sanctions and some shifts in local government,” Anderson said. “But that’s another place where we’ve been utilizing a lot of our present employees and regular volunteers in the area who get that job actualized until there’s kind of a more stable way for us to go visit in person, which we have been projected to do this spring.”

Anderson and the nonprofit are currently working on Project Protect, which is a way to slow the spread of COVID-19 in low-income communities. This includes the selling of masks in the U.S. to raise money to provide masks in these communities.

“Our mission is to address the systemic needs of children medically, nutritionally and educationally so that they’re able to escape that cycle of poverty,” Anderson said.

Anderson has found that a few people have taken advantage of her organization, in regard to adding service to their resumes. She said she has had people ask her to write letters of recommendation for selling masks or posting to their Instagram stories.

To Anderson, true service looks like leveling the playing field for communities.

“[It] made me think about how if everyone were given that same playing field, it’ll be amazing what some of these young kids would be able to accomplish,” Anderson said.

Many students participate in short-term missions, spanning from one to two weeks, and occasionally six to eight weeks. Junior Psychology major Joseph Karlous had the opportunity to participate in a Christian mission in Hawaii. He went in spring 2020 and again in summer 2021.

Karlous went to a mission home on the westside of O’ahu. The place he went to had a church with a pastor who had seven biological children of her own and adopted seven other children from an encampment nearby. He said the homeless encampment had around 3,000 members.

Karlous noted similarities between himself and the children he met.

“I think the kids broke my heart, because I kind of looked like them,” Karlous said.

Karlous said his skin tone was similar to the children. He also resembled the fathers in the community.

He said he helped with various tasks, many of which focused on humanitarian aspects like handing out food or fixing up the church, but he found an underlying Christian connection to the people he helped.

“These kids love God,” Karlous said. “I [would] say, ‘What’s your favorite book in the Bible?’ And they would scream ‘Ezekiel.’”

Karlous found on his trip that though he did not actively preach the Word of God, the members of the community would approach him and just start speaking about religion.

Sophomore Sport Administration major Joseph Deluzio went on a mission trip when he was younger, and like Karlous wants to return to do more service.

When Deluzio went with his church to build a school in Haiti, he remembers his older siblings laying tile while he painted the walls.

“Serving is our calling,” Deluzio said. “To be people of service, to be of service to people in need as that sees those in a community who are not as fortunate.”