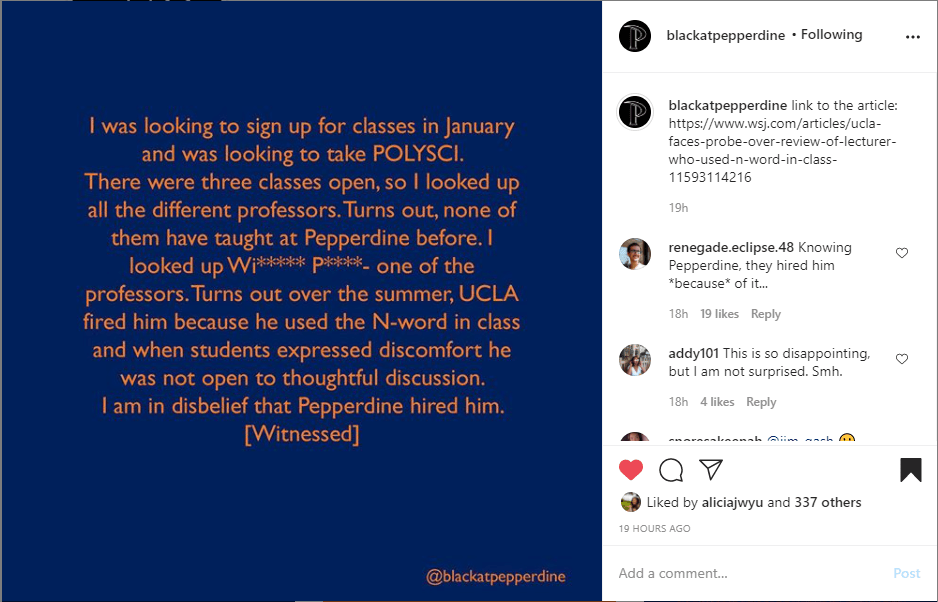 Editor’s Note: This article references a racial slur. The Graphic uses the phrase “N-word” in place of the slur.

The week of June 2, political science lecturer William “Ajax” Peris taught online classes for the University of California, Los Angeles. The course taught U.S. history, and Peris chose to read aloud from Martin Luther King Jr.’s “Letter from a Birmingham Jail” and show the class a documentary with graphic depictions of lynching. Both media contained the N-word.

Since June 2, UCLA placed Peris under investigation, but Peris has moved on to a new virtual classroom — Seaver POSC 104.

An anonymous Nov. 12 submission to the Instagram account @BlackAtPepperdine first drew the Pepperdine community’s attention to Peris’ employment at Pepperdine and the incident at UCLA in June.

“[…] over the summer, UCLA fired him because he used the N-word in class and when students expressed discomfort he was not open to thoughtful discussion,” according to the anonymous submission to @BlackAtPepperdine regarding Peris. “I am in disbelief that Pepperdine hired him.”

Peris was not fired from UCLA, as the anonymous submission claims, but continues to teach political science, according to UCLA’s Office of Strategic Communications. Pepperdine administration confirmed in a Nov. 13 email to the Graphic that Peris teaches Political Science 104 at Seaver and will teach courses for both the upcoming January term and spring 2021.

Seaver Dean Michael Feltner wrote in an email that the Social Science Division became aware of the incident at UCLA during Peris’ hiring process and the division “explored the facts of the situation to ensure Peris shares Seaver’s commitment to fostering a community of belonging for all students.”

“During those conversations Dr. Peris again took ownership of his actions, recognized the hurt they caused, apologized and shared he had altered his instructional pedagogy when teaching materials containing racially charged language,” Feltner wrote. “I am confident Dr. Peris is committed to supporting Pepperdine in creating an environment where all students feel welcome and safe.”

Peris did not respond to the Graphic’s inquiry for comment.

The Incident, UCLA Reactions and the Education Department Investigation

On June 2, Peris planned to teach from the textbook “Campaigns and Elections, Third Edition” on the topic “Democracy or Chaos?” according to the Introduction to American Politics spring 2020 syllabus on his website. That day, he read from Martin Luther King Jr.’s “Letter from a Birmingham Jail” as well as showed a documentary that depicted lynchings in explicit detail. Both the letter and the documentary used the N-word, and Peris — who is white — read the N-word aloud in class.

A student shared a video of Peris saying the N-word in class via Twitter on June 2.

In the video, students send messages in the Zoom chat asking Peris not to say the N-word aloud as he reads from the letter.

Students at UCLA expressed their discomfort with Peris’ use of the N-word in class, according to individuals on Twitter.

We were upset that a WHITE professor was so insistent on using racially charged language even after being asked not to. He is white. In no context should he be saying the N-word in the first place.

UCLA recent graduate Ruben Ilan shared on Twitter that students in Peris’ class were angered not by the course material but rather the insensitivity demonstrated by Peris in using the N-word.

“None of the students were upset that the professor dedicated a lecture to the history of racial tensions in the U.S. and no one was upset that he included passages from MLK’s ‘Letter,’” Ilan wrote. “We were upset that a WHITE professor was so insistent on using racially charged language even after being asked not to.”

Following the incident, UCLA placed Peris under investigation. Peris sent out an apology video to his students June 3, and UCLA also hosted a town hall for Peris’ students, according to an Oct. 5 article by the Daily Bruin.

UCLA has not banned saying the N-word in classes, according to the Daily Bruin.

Conservative news organizations including Fox News, The Washington Free Beacon and The College Fix all covered the incident, highlighting a lack of free speech on the part of UCLA for investigating Peris’ use of racial slurs.

The Washington Free Beacon received a department-wide email from UCLA Political Science Chair Michel Chwe, Vice Chair for Graduate Students Lorrie Frasure, and Chris Tausanovitch, vice chair for undergraduate students. The three chairs condemned Peris’ use of the N-word, for showing the documentary in the class and for not stopping the presentation when students asked.

“We share students’ concerns that the lecturer did not simply pause and reassess their teaching pedagogy to meet the students’ needs, particularly during this sensitive time,” according to the letter from the political science department.

George Floyd died May 25 during an arrest — one week prior this incident — sparking controversy, protest and conversation around the Black Lives Matter social movement and police brutality in the U.S.

In the UCLA department-wide email, the chairs also referred Peris to UCLA’s Discrimination Prevention Office, according to The Washington Free Beacon.

On June 25, the U.S. Education Department sent a letter to UCLA Chancellor Gene Block expressing concern that the university “improperly and abusively” targeted Peris in violation of UCLA’s policies for free expression, according to the Wall Street Journal.

“Targeting an instructor for reading from the works of Dr. King or showing a documentary quoting him is a direct assault on academic freedom and constitutionally protected free speech,” according to the Education Department’s letter, signed by Robert L. King, assistant secretary of the Office of Postsecondary Education.

Under the investigation, UCLA must hand over emails and other records for Peris and others in the political science department, the school’s code of conduct, and Peris, the chancellor and others must be available to interview, according to the Wall Street Journal.

No updates have been given on the investigation.