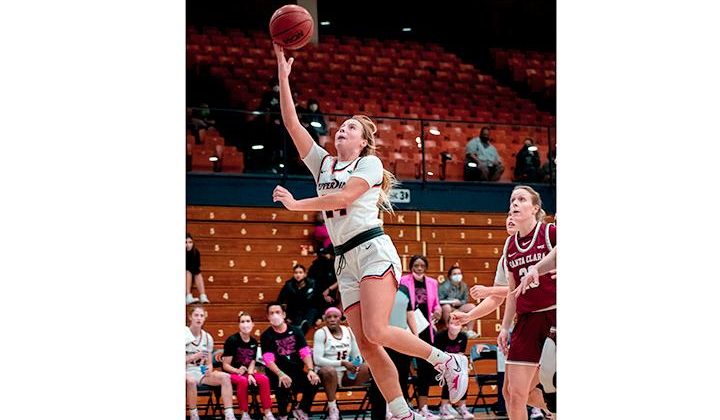 Freshman guard Ally Stedman reaches for a layup during the Waves’ 63-54 loss to Santa Clara at Firestone Fieldhouse on Feb. 17. Stedman led the Waves with 19 points during the match. Photos by Brandon Rubsamen

Women’s Basketball struggled to keep up with a spirited Santa Clara team, as the Broncos defeated the Waves 63-54 at Firestone Fieldhouse on Feb. 17. This was the Waves second loss to the Broncos this season.

After losing to San Francisco two days later on Feb. 19, Pepperdine now sits at 8-14 overall, with a 4-9 record in conference play.

“We kind of gave up towards the end,” Stedman said. “Instead of picking up our energy, we kind of let it go.”

The Waves played four matches between Feb. 10 and Feb. 17. On Feb. 15, the Waves took down Pacific 74-65, in the second of four consecutive home games.

Tired legs did not seem to be a factor in the first quarter against Santa Clara, though, as the Waves raced out to a quick 7-3 lead in the first couple of minutes. Stedman and Obinma were active from the 3-point line and the paint, respectively, and collected the Waves first 12 points.

“She’s our leading scorer and she’s a freshman,” Head Coach Kristen Dowling said of Stedman. “She plays sometimes like she’s not a freshman. She’s done a phenomenal job. As the season’s gone on, she’s gotten better at keeping herself out of foul trouble so she can stay on the court.”

The Broncos upped the tempo midway through the first quarter. From 12-12 with around six minutes left in the quarter, the Broncos went on an 11-0 scoring run. They were led by senior guard Lindsey VanAllen and sophomore forward Lara Edmanson, who scored 22 and 14 points, respectively.

As the clock ticked through the final seconds of the first quarter, Santa Clara senior guard Bryce Nixon hit a mid-range shot, then stole the ball from the Waves as they attempted to inbound down the floor. Nixon put in the easy layup, and with it, put the Waves in a 23-12 hole at the end of the first quarter.

“We made some adjustments in terms of how we approached their offense, and we just locked down defensively,” Dowling said.

Pepperdine looked to close the gap in the third quarter, largely through giving the ball to Stedman, Obinma and senior guard Cheyenne Givens. But the Waves struggled to create any kind of scoring run. Pepperdine only scored consecutive baskets once in the quarter; otherwise, every time the Waves scored, the Broncos came right down the floor and answered with a basket of their own.

The Waves had trouble containing VanAllen throughout the game. Only down nine points with five minutes left in the quarter, the Waves failed to guard VanAllen on the wing, and the senior guard put in an uncontested 3-pointer to make it a 43-31 lead.

With 30 seconds left in the third quarter, VanAllen stepped to the line and made two free-throws to put the Broncos up 45-33. Givens dribbled halfway down the court in the two seconds that remained, but her Hail Mary shot only glanced the bottom of the net.

“They had more energy than us,” Amosa said. “None of us were really making our shots.”

Obinma came out firing in the fourth quarter, earning the Waves’ first six points through impressive post play. VanAllen, meanwhile, answered with another 3-pointer. Stedman hit two consecutive jumpers, and senior guard Malia Bambrick got a steal and an easy basket in transition to claw the Waves back to 45-53 with 4:48 left on the clock.

Shortly after, consecutive 3-pointers from Given and Bambrick kept the Waves in touching distance, but to no avail. As time expired and Pepperdine tried to play the foul game, one of the Waves players fouled VanAllen, who stepped to the line and dispatched two free throws to end the scoring at 63-54. VanAllen went eight-for-eight from the free-throw line throughout the game.

“They run a pretty good offense,” Amosa said. “Especially with number 23 [VanAllen], that’s their go-to player. A lot of their stuff runs through her, but we didn’t do a good job rotating, either, or talking and communicating. Those are things we’re trying to work on.”

The Waves were back to the grindstone two days later to finish up their four-game homestead against San Francisco on Feb. 19. The Waves lost the contest 71-66, largely due to San Francisco’s 21-point fourth quarter.

“We’re playing every other day right now,” Stedman said. “Win or lose, it’s kind of hard to bounce back right away.”

Pepperdine planned to travel to San Diego on Feb. 21, but West Coast Conference officials canceled the game. Next up, the Waves travel to Spokane, Wash., to face Gonzaga on Feb. 24.