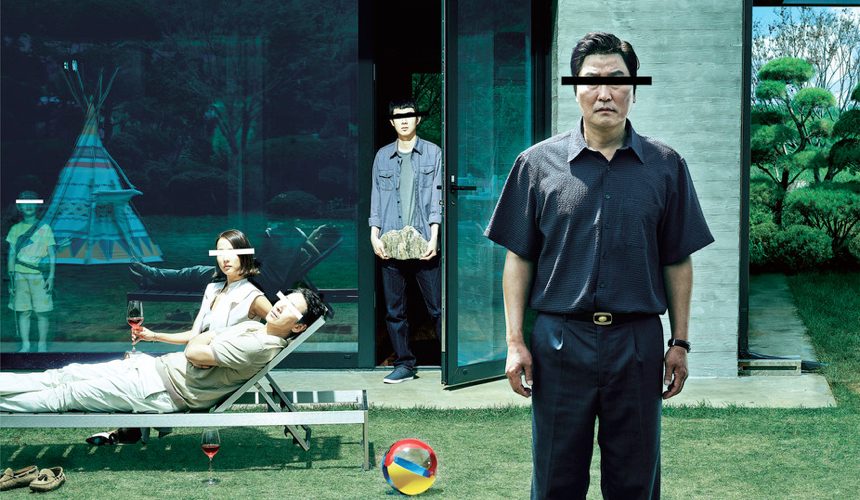 The South Korean film had its world premiere May 21 at the 2019 Cannes Film Festival and won the Palme d’Or, the highest prize awarded at the film festival. The film had a limited release in the U.S. Oct. 11 with a wide release Oct. 25.

The film begins by looking at a tiny, semi-underground apartment in a rundown neighborhood that the Kim family lives in. The father (Song Kang-ho) is an unemployed driver and lives with his wife (Jang Hye-jin) and two grown children. The family of four struggles to live and works odd jobs to make ends meet. 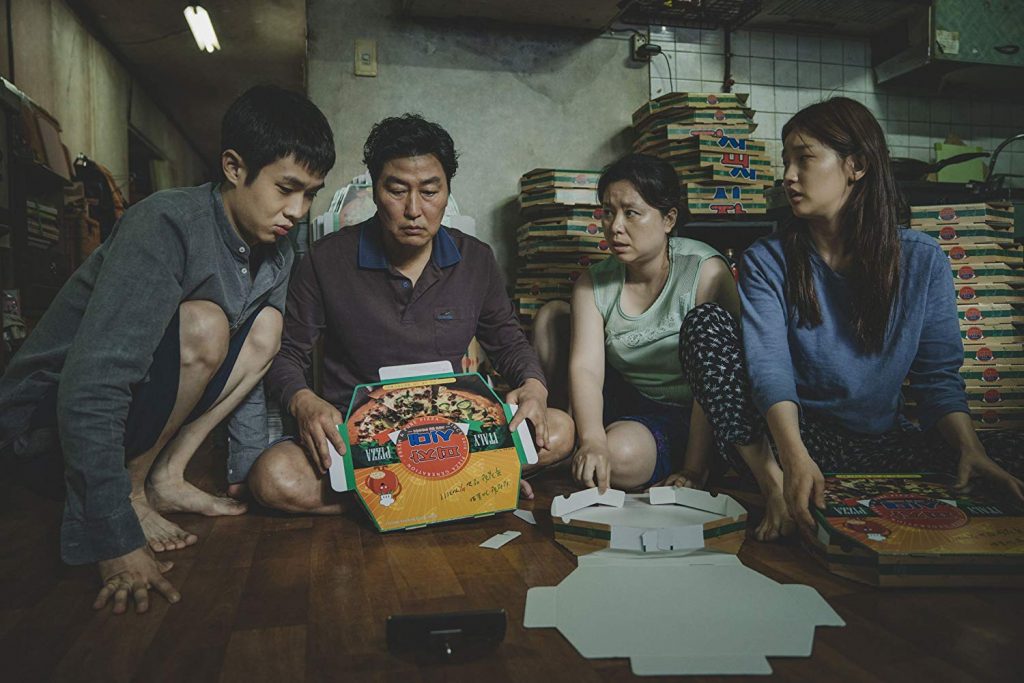 The son (Choi Woo-shik) becomes a private tutor for a wealthy family after a friend recommends him for the job. Despite his lack of qualifications, he meets the Park family and tricks the mother (Cho Yeo-jeong) into believing that he is a successful English tutor for the family’s daughter.

Once hired, he convinces Mrs. Park to hire his sister (Park So-dam), who poses as a professional art teacher and therapeutic instructor. The brother and sister create a deceitful plan to trick the Parks into hiring their mother and father.

Eventually, the entire Kim family is working for the Park family in different roles. The father becomes the family’s chauffeur and the mother replaces the longtime housekeeper (Lee Jung Eun). 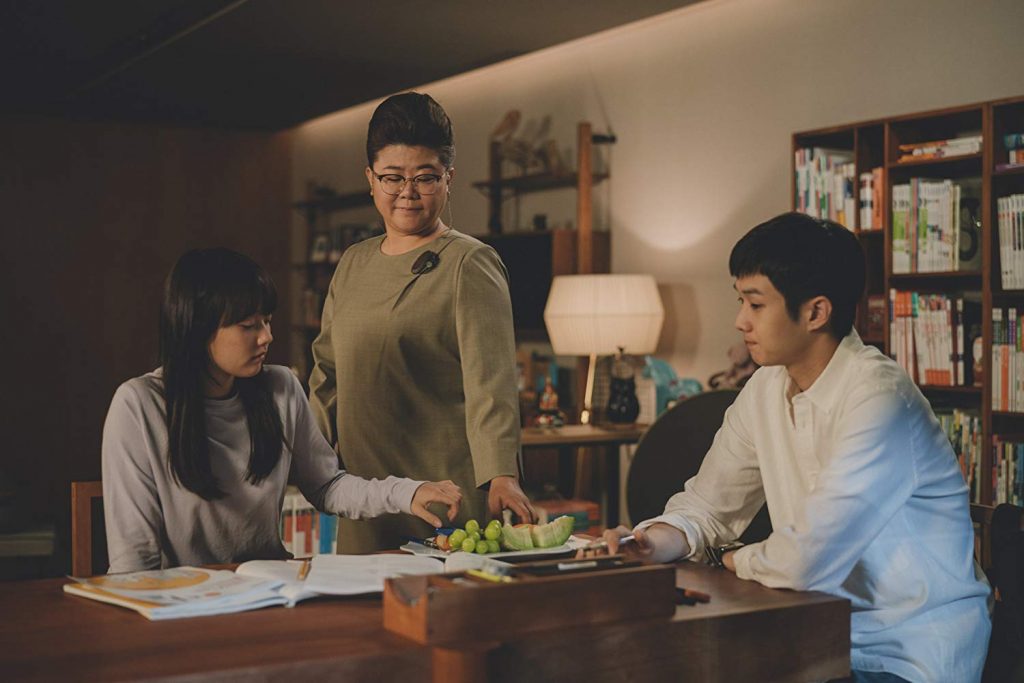 The Kims enjoy the comfort and luxury of their new life until one evening, everything changes with an unexpected turn of events.

The comedic and thrill-seeking film can be broken down into two parts. The first half is more light-hearted and sprinkled with subtle humor. The second half is more suspenseful and brings into light the disturbing reality of deception and greed. Each is entertaining to watch but sets a different tone for the viewers.

Throughout the film, Yeo-jeong effortlessly portrays the naive and gullible Mrs. Park with style. Yeo-jeong’s performance is well-executed and depicts the lavish lifestyle of the upper class. Additionally, Jung Eun’s portrayal of the previous housekeeper is tactful and clever. She plays a dual character with a surprising role, and her appearance in the film allows for suspense with her strong performance. 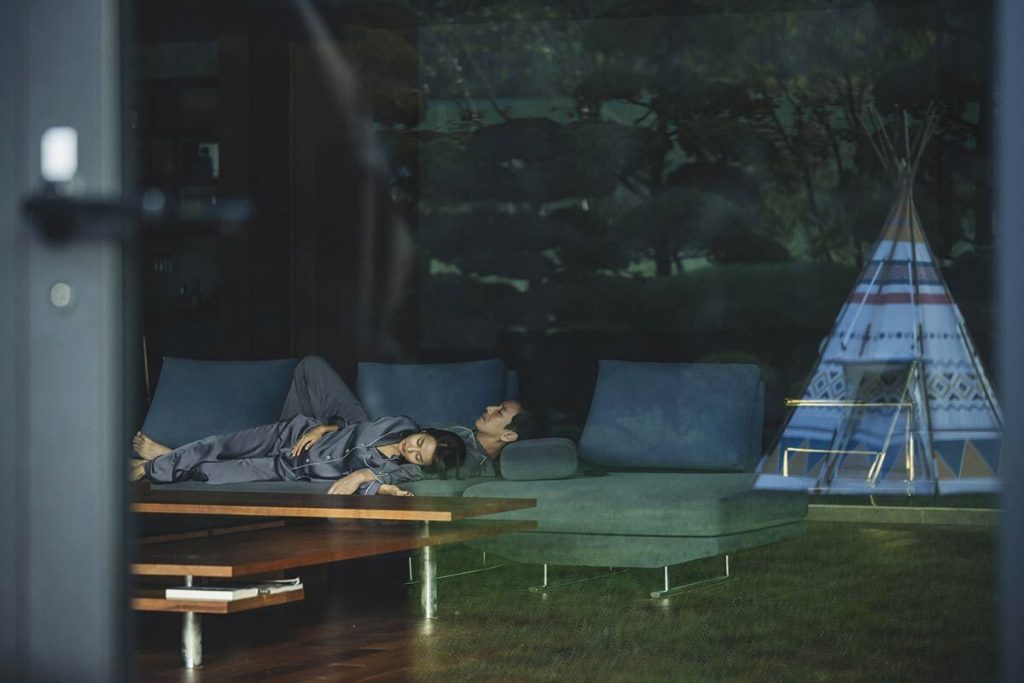 While the film overtly presents a critique on societal classification and rank, it does so through a carefully and well-thought out narrative. Joon-ho co-wrote the enticing screenplay with Han Jin-won, and it is well-executed throughout the film. The story blends humor, suspense, action and drama into a captivating narrative that juxtaposes wealth and poverty. This juxtaposition allows two different families with two different motives to weave together in the mess that ensues.

Through his film, Joon-ho stages and criticizes societal issues such as class and welfare. These issues are made apparent through the varying scenes, capturing the harsh reality of poverty compared with the lavish lifestyle of the wealthy. While there is a bleak comparison between the two, the film uses this as an opportunity to expose the reality and issues of capitalism, materialism and society as a whole.

Although “Parasite” offers a unique take on societal issues, it presents a story that is bold and daring with elements of suspense and humor. While the film presents a stark commentary on these issues, it is, without a doubt, a must-see film of the season.

Fresh Face Column 7: First-Year Dances Her Way into a Career of a Lifetime 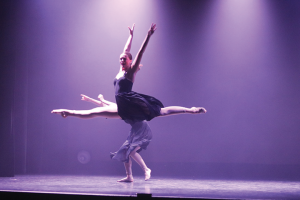 Fresh Face Column 7: First-Year Dances Her Way into a Career of a Lifetime

Photos Courtesy of Kait WardFirst-year Kait Ward said she began dancing when she was 4. However, it wasn't until she was 10, when...
Copyright 2013 Jupiter Premium Magazine Theme
Back to top