Review: ‘Marriage Story’ Stands Out as a Beautiful Look at Modern Divorce 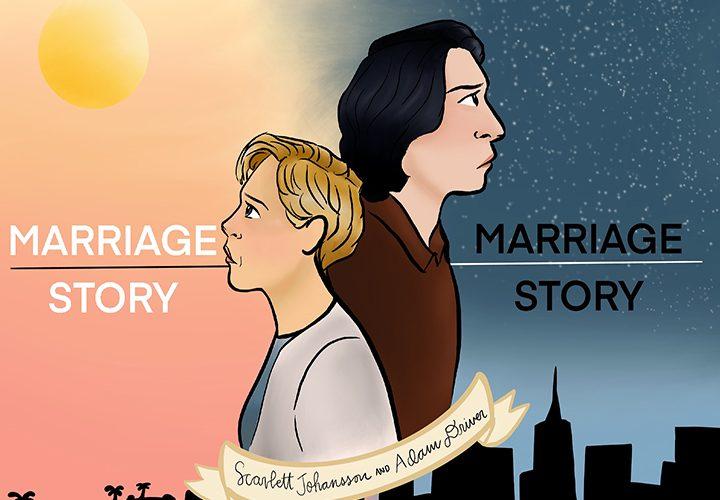 In December, Noah Baumbach’s “Marriage Story” stunned traditional theater-goers when it was nominated for more Golden Globes than any other movie this year.

The Netflix Original film prevailed again this week with six Oscar nominations in most major categories, including Best Picture, Best Actress and Best Actor. Its success contributes to a monumental moment in history by helping Netflix secure the most nominations of any studio — a first for a streaming service.

The gut-wrenching drama captures the destructive nature of divorce and cautions people to prioritize balance in their relationships. In an era where roughly half of all marriages end in divorce, most viewers will feel a personal connection to the film. Ultimately, anyone who has grown apart from someone close to them or seen the dissolution of something they once cherished can relate to this film.

Nominated for Best Actress, Scarlett Johansson’s performance as Nicole, an actress divorcing her director husband, is effortlessly captivating. In an almost seven-minute monologue, she allows the audience to sit in the room with her and experience her pain. Her raw display of emotion feels almost too real. Despite her independence, success and intelligence, Nicole feels forced to live in her husband’s shadow.

“Marriage Story” highlights a very real problem new parents face: One party is allowed to follow their ambitions while the other is forced to wait patiently on the sidelines. In this case, Nicole spends most of her marriage feeling obligated to fit into a mold of a selfless wife and mother. Eventually, she realizes her husband should not be the sole controller of their life decisions. She sheds light on society’s tendency to suppress women by expecting them to be self-sacrificing mothers. Johansson’s performance is powerful because her strength in these scenes challenges the cliché of portraying divorcees as weak and fragile.

Adam Driver, Johansson’s counterpart, is equally compelling. In theory, his character, Charlie, is someone viewers are all trained to hate. On paper, Charlie is egotistical, controlling and ill-tempered. He also engages in an extramarital affair with their co-worker. Yet, Driver’s authentic emotions and amiable quirks make the audience inexplicably engaged by his captivating character.

Despite his flaws, viewers are drawn toward his undeniable love for the couple’s 8-year-old son. The audience cannot help but feel sorry for Charlie as he loses control, even though that very control is damaging both Nicole and their marriage. Regardless, it is difficult not to hurt for him as his efforts to have a friendly and uncomplicated separation are annihilated at every turn. He is forced to watch his narrative become bent and twisted in the eyes of the law.

Perhaps, it is the audience’s tendency to empathize with Charlie that makes this story unique. It illuminates the legal system’s destructive and deceptive nature.

Alternatively, victimizing Charlie could be the film’s greatest downfall. Establishing Nicole as the innocent party while showing more of the story from Charlie’s point of view forces viewers to subconsciously overlook his emotionally-abusive tendencies. It is evident that Nicole places far more effort into her marriage and feels significantly more pain because of it. Still, Baumbach tends to victimize Charlie in most scenes.

Since the screenplay is loosely based on Baumbach’s own divorce, the story is controversially crafted to make viewers feel obligated to sympathize with Nicole while the structure of the scenes effortlessly compels viewers to sympathize with Charlie.

In a powerhouse role that commands no sympathy, Laura Dern manages to nab the film’s only Golden Globe win, Best Actress in a Supporting Role. Her character, Nora, Nicole’s attorney, is a feminist icon, but she also represents a massive problem with the divorce process. Nora starts an unnecessary war with Charlie, driving a wedge into his already rocky relationship with Nicole. “Marriage Story” does not shy away from showing its audience how profoundly bitter, damaging and draining the divorce process can be.

Perhaps what sets “Marriage Story” apart from every other typical divorce story is its Oscar-nominated score by Randy Newman. The songs he has created for this film are just as whimsical and playful as the “Toy Story,” “Monster’s Inc.” and other Disney scores that he is famous for. The music’s cheerful tone juxtaposed with the somber subject matter reminds the audience that despite all the madness, this story starts with love and that same love, in some form, will always exist.

Above all else, this film is a love story between two artists and their craft. Charlie is an artist completely encapsulated by his work, where Nicole is one who is always eager to do more. She frequently expresses an interest in directing or producing, but Charlie selfishly dismisses her. Part of this is because his work is his one true love. He clearly prioritizes his play over his marriage, halting Nicole’s own dreams in the process.

Nicole’s acting ambitions are what finally gives her the push to remove herself from a toxic relationship. She may not have achieved a happily ever after with Charlie, but her separation from him grants her the freedom she needs in order to take a bigger role in her work. Their love for each other is simply not strong enough to overpower their passion for art. This element is what makes the film remarkably beautiful.

Push Toward A Positive Fresh Start 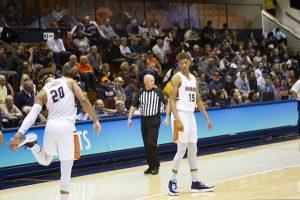 Kessler (20) and Kameron (15) Edwards walk onto the court after a time out | Photos by Austin Hall Pepperdine Men's...
Copyright 2013 Jupiter Premium Magazine Theme
Back to top