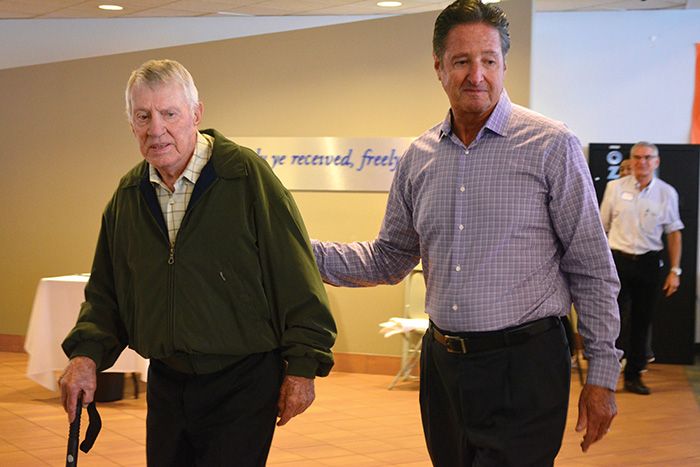 Three hundred athletes, friends and admirers gathered in the Caf on Saturday to celebrate Coach Richard Kampann’s 90th birthday at a surprise party.

Coach Kampann retired for 10 years before finding his way to Pepperdine. Initially stepping onto the Malibu campus as a P.E. teacher, Coach K assumed the role of men’s cross country coach soon after. He trained the cross country team for 17 years.

Coach Kampann was a high school coach at University High in Los Angeles for 24 years and established a strong legacy of success.

“He had some kids that were close to four-minute milers and city championships,” Pepperdine track and cross country Coach Robert Radnoti said. “He trained some Olympians, like Susie Favor Hamilton, to the ‘96 Olympics.”

When Radnoti took over the cross country and track programs at Pepperdine, Coach K stayed with the program as an assistant coach.

“He’s had a coaching career that spans 60 years and has touched a lot of people’s lives,” Radnoti said. “He’s one of my best friends.”

The event attracted athletes, coaches and friends alike to Malibu to celebrate the life of Coach K. Some traveled from as far as Brazil and China to attend the event, while other attendees hadn’t seen Coach K in 60 years.

Robert Acker, a pole-vaulter and captain of the University High class of ’74, was one of the speakers at the birthday bash.

“My time with Coach K was formative,” Acker said. “It was a formative time because of his training of young men. Track in high school is a place boys found when the doors weren’t opened in other sports. It was the place where we were transformed into men.”

Coach K’s birthday included key speakers, articles and memorabilia from his 60 years of shaping men and women in his sport. About a dozen athletes per decade, from the 1950s to 2005, came up to thank and recognize the influence Coach K had in his or her life. Coach K’s admirable dedication brought 300 to the Caf to thank the man work spans over half a century with memories, laughs and cake.