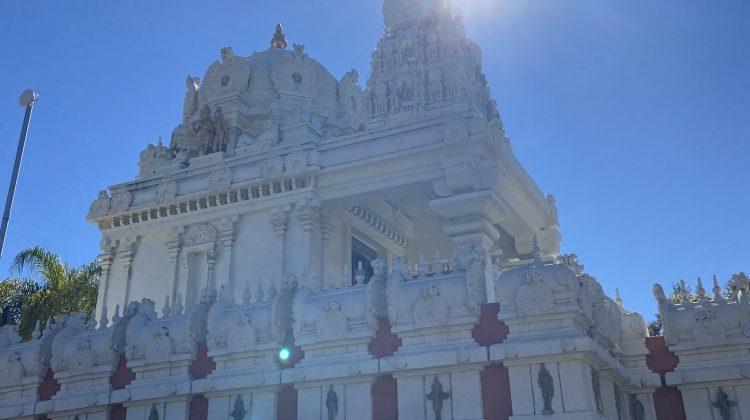 The upper complex of the Malibu Hindu Temple captures the eye of visitors with its ornate traditional Indian design. The temple was built almost entirely by a Hindu architect who traveled from southern India to Malibu for the temple’s construction in 1981. Photo by Lydia duPerier

The Malibu Hindu Temple, Self-Realization Fellowship Lake Shrine and the Malibu Jewish Center and Synagogue are a few locations students said are their favorite to visit.

First-year Annelise Cady visited the Malibu Hindu Temple in January and said it opened her eyes to the importance of studying and experiencing other religions.

“Often people, when they’re just stuck in one religion, they can become very judgmental of other religions,” Cady said. “And so by exposing yourself to other ideas and other faiths you’re kind of broadening that view and maybe dismantling some misconceptions you had.”

The Malibu Hindu Temple is the largest Hindu Temple on the West Coast, located about five miles away from Pepperdine on Las Virgenes Rd. The temple has various shrines of Hindu deities including the presiding deities of Lord Vishnu in the upper complex and Lord Shiva in the lower complex.

Parsanna, a priest at the temple, said the temple requires visitors to remove their shoes before entering as an act of respect. Once inside, visitors will often find Hindus worshiping and giving offerings to the deities.

Due to the COVID-19 pandemic, the temple is only open on the weekends, but visitors do not need an appointment to visit.

“We provide outside services of puja, what we call worship, every Saturday and Sunday for any one who wants to come,” Parsanna said.

Cady said her experience at the temple was fascinating and recommends everyone to go if they have the opportunity.

“I would definitely say go do it if you want to and just have an open mind and don’t be afraid to talk to the volunteers,” Cady said. “They’re super friendly — they might not know exactly why you’re there, but they’ll definitely be willing to talk and help out.”

The Malibu Jewish Center and Synagogue is about one mile west on PCH from Pepperdine’s campus.

MJCS is a reconstructionist Jewish center which means they “approach Judaism — and life — with deep consideration of the past and a passion to relate it to the present. In a rapidly changing world, Reconstructionist communities share and create new ways of being Jewish to connect us to the divine and ensure our lives are filled with purpose,” according to the MJCS website.

Every Friday, MJCS hosts a Shabbat dinner at a congregant’s home where they share the meal together and build camaraderie, according to the MJCS website. The next morning, the members gather for a Shabbat service where they study the Torah, the first five books of the Bible and pray.

All are welcome to take part in any of the services without appointment.

“This is the home of Judaism that you have always dreamed of — casual yet complete, spiritual yet grounded in tradition, and inclusive of all families and lifestyles,” according to the MJCS website.

Self-Realization Fellowship Lake Shrine sits on the top of a mountain on Sunset Blvd, about 20 minutes east on PCH from campus.

The lake shrine is not specific to any religion but instead has shrines dedicated to multiple different religions such as Islam, Judaism, Hinduism, Christianity, Hinduism and Buddhism, Martin said.

Yogananda “envisioned a spiritual environment where people from all over the world could come and experience peace of heart and mind,” according to the website.

When people visit the lake shrine, Martin said most are amazed by the scenery and wildlife.

“He [Yogananda] founded this beautiful lake shrine, which has a portion of Mahatma Gandhi’s ashes and is dedicated as a World Peace Memorial and people come from all around the country and the world,” Martin said. “It’s a destination spot, even for those that aren’t affiliated with Yogananda because it’s so peaceful and a beautiful place to meditate.”

“Just come and visit. You have to experience it for yourself,” Martin said. “That was always Yogananda’s thing, just reading about religion really won’t do it for you. You have to drink up the experience and the lake shrine is perfect for that.”

Because of COVID restrictions, Martin said the lake shrine requires a reservation to visit but still hopes Pepperdine students will come to see it.