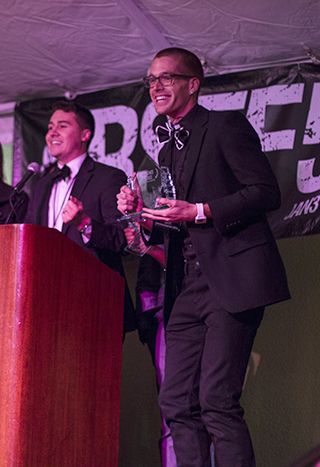 With the spirit of storytelling, the REELSTORIES Film Festival seeks to capture with the overarching theme: “stories create reality.” This year, the student short “Dead Week” proved to be the overall favorite at the festival, winning the Audience Choice Award, Impact Award, Technical Excellence Award and the Grand Prize Selection.

Now in its fifth year at Pepperdine, REELSTORIES has successfully brought the Malibu and Pepperdine community together. For a night dedicated to the appreciation of art, storytelling and cinematography, student-produced films and feature-length documentaries are showcased.

The atmosphere of the evening evoked a Hollywood-esque feel with tents lined with chandeliers, photo opportunities against a REELSTORIES backdrop and a pristine red carpet leading up to the check-in area. Lights were strung around Joslyn Plaza, and tables were set up as guests talked, listened to music and enjoyed hors d’oeuvres provided by Wolfcreek Restaurant Catering.

During the reception, the VIP tent buzzed with filmmakers and stars. Director Gabriela Cowperthwaite and producer Manuel Oteyza of “Blackfish” came to see the screening of their documentary; director of “The Crash Reel,” Lucy Walker, was in attendance; and Charlotte Crossley, Dr. John Mable and Claudia Lennear, three of the singers from “20 Feet from Stardom,” spoke after the showing of their film. Other notable guests that evening included actor Steven Anthony Lawrence, best known for his role as Beans on “Even Stevens,” and Tom Shadyac, producer of “Bruce Almighty.”

Staying true to the theme of expression and creating stories, the reception also featured an art exhibition with a chalkboard on which students wrote their favorite movie quotes, and “the butterfly” effect wall for recording thoughts, feelings, wishes and regrets.

“The REELSTORIES chalkboard wall really adds to the whole experience for college students. It allows them to express themselves as well as enjoy the whole atmosphere,” senior Ralph Sampang said.

As the art walls and tables filled up, it was finally time for guests to enter their respective venues for the student short and feature-film showings. Excitement and anticipation filled the air as the crowd split up and headed to Elkins for “Blackfish,” Smothers Theater for “Twenty Feet from Stardom” and the Waves Cafe for “The Crash Reel.” It was clear that most guests had a favorite in mind.

When asked what film she was most excited to see, senior Sammie Ichikawa replied, “’Blackfish.’ I’ve heard a lot about it and all of my friends said it was really good.”

In addition to the feature documentaries, guests had the option of viewing student-produced shorts. REELSTORIES seeks to promote students expressing their creativity and commenting on pivotal social issues in an open forum that allows their passion to shine through. Most guests were equally as excited for the student shorts as they were for the feature length documentaries.

“I’m excited to see all the student films,” sophomore Anaka Osborne said. “I think it is a great way for film students and all students in general to display their work and for everyone to see.”

One of the student shorts featured at this year’s REELSTORIES Film Festival was “Iris,” directed by senior Ben Holcomb, who is also a Graphic columnist, and senior Taylor Heinrich. “Iris” is a film shot from a man’s point of view as he watches his life flash before his eyes right before his death.

“One of the coolest things was that we were able to get the rights for Alexi Murdoch’s music, so we had professional rights to use it in our film,” Heinrich said. “So that was really cool, and when we found that out we were really excited.”

Another student short featured was “Dead Week,” directed by senior Candace Lowry, written and produced by senior Ryan Piche and edited by senior Mackenna Millet. This short posed a lighthearted take on the effects of dead week. It follows a freshman named Kaitlin, who notices eerie changes around campus the week before finals.

Like Heinrich, Lowry found the filmmaking process to be exciting and challenging. She emphasized the importance of selecting the right team.

“I’ve actually always wanted to work with Ryan and Mackenna, and we wanted to make a movie together specifically for REELSTORIES,” Lowry said. “Mackenna had this idea, and Ryan wrote it.”

At the awards show, both students and guests were passionately discussing the documentaries they just saw while enjoying dessert and coffee as the student winners were presented. Although the student short “Dead Week” swept the awards show, everyone who attended the event left with a new insight on the messages at the heart of all the documentaries.