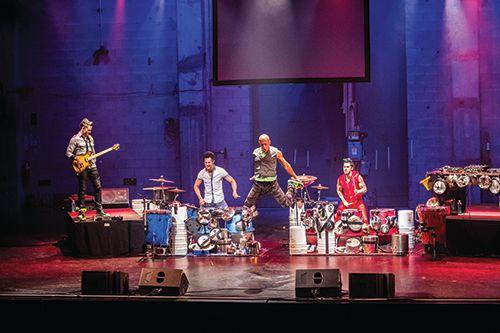 With comedy, fire and plenty of “junk rock” to go around, Recycled Percussion rocked the Smothers Theatre stage Sunday afternoon.

Each audience member recieved “recycled instruments,” which had color codes coordinated to each member of the band. The crowd waited for the show to start, making a cacophony of banging and clanging with their instruments. The banging died out, replaced with laughter when a video of hilarious fails began.

“Make some noise” flashed on the screen as the band hit the stage in a blaze of light.

“It’s sort of like a full-on interaction version of a rock band,” Bowman said. “Each instrument is color coordinated to a certain person in the show, and you make noise when you see this on the screen.”

Recycled Percussion got its start at a high school talent show in 1995 and from there it took off. Spencer took inspiration from New York street percussion and added in un-recycled instruments to make his own genre known as “junk rock.”

In 2009, they received a call from NBC’s “America’s Got Talent” to audition for a place on the show.

“The band before AGT was very successful, touring most of the country playing at colleges, and had done thousands of shows, won numerous awards for playing in every single school that you could possibly think of in every single state,” Bowman explained. He explained that they auditioned in New York but didn’t make it all the way through “America’s Got Talent.” They ultimately finished in third place in the 2009 season of the show, making them the only non-singing group to place in show history up to that point.

After the series concluded, Recycled Percussion got its own show in Vegas at the Tropicana Hotel, where they stayed for two years. Terry Fator, who won AGT in 2007, has been the only other headlining act in Vegas other than the band.

“In Las Vegas you’re allowed the opportunity to build a bigger set with more elaborate things that we can’t travel with. We open our show in Las Vegas coming down on a wall from the ceiling that goes upside down as we’re playing,” Bowman said.

Between nightly Vegas shows and traveling performances both domestically and internationally, the band does about 400 shows a year. Right now the band is working on expanding their show out to the open seas.

“We’re working on doing what we call a split cast where we’re hiring and auditioning people that are going to go out onto Holland America cruise line and they’ll end up playing the part of Recycled Percussion out on the cruise line,” Bowman said.

Not only does the band give phenomenal performances on stage, but they also carry out the mission of giving back. The band works with the homeless and domestic violence victims in Las Vegas, and Spencer is starting his own organization called Legacy X.

“[It] is really all about defining your legacy in life and how you can achieve the goals you want, and [Spencer] is doing a lot with trying to start up a center in Las Vegas for children that are being bullied,” Bowman said.

In the tradition of their Vegas show, the band ran up the stairs out of the theater and to the lobby to sign autographs and meet and greet audience members. All proceeds from merchandise were given to an anti-bullying foundation. 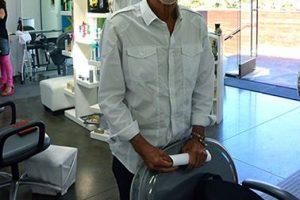