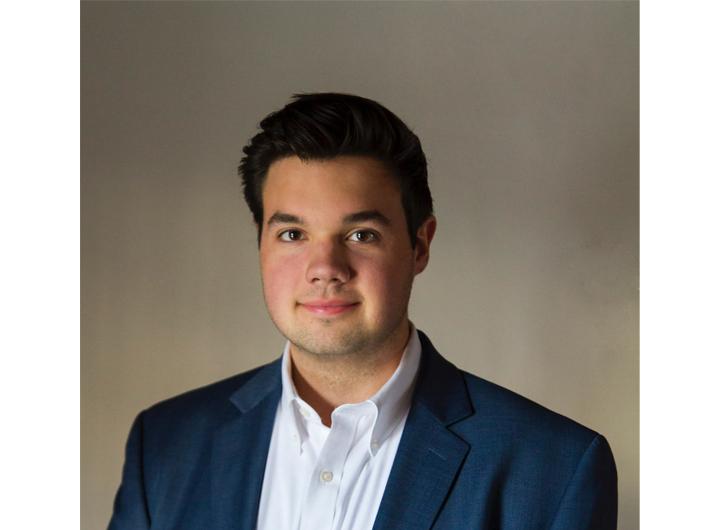 Transfer Jared Maguire poses for a “classic, awkward” headshot in his living room. Maguire has planned to graduate in spring 2021 with a degree in Finance.

Senior Jared Maguire said he knew Pepperdine was the perfect school for him even after he got rejected during his senior year of high school. Maguire has made many memories throughout his time at Pepperdine, especially while living in the transfer dorm, Eden. Now, preparing to graduate as a contract major in Finance, Maguire’s dream job is to work in real estate and oversee big projects from beginning to end.

Jared Maguire: In college, my brother played baseball against Pepperdine [about] eight years ago, so I came just for that to see campus and I was like, ‘Oh my God, this is beautiful. I really want to go here.’ I applied out of high school [and] didn’t get in. I actually moved out here to Southern California [and] went to a junior college where I knew the classes would transfer and applied again. So I transferred in as a sophomore, and I’m here now.

What are you involved in at Pepperdine?

JM: When I first got here, I took a job with the Inter-Club Council that manages all of the clubs and organizations. I worked for the Inter-Club Council for two years or so until May of this year. As of May, I worked for the Student Programming Board […] so I spent most of my experience building campus life. I’d like to say it’s been really rewarding.

What are your plans for after graduation?

JM: Oh God, I don’t really know. I’d like to end up in financial services or some sort of a startup — something cool, something fun — but I’m really open to kind of anything. I know that’s the default answer, [saying] I don’t really know, but anything is cool. At this point, I think I’d just like a job.

What did you do during quarantine?

JM: The most exciting thing I did was house hunt for this year. I hung out with family and did road trips that were safe. I went to Florida once, which proved to be the wrong idea because as soon as I got down there, everything just kind of exploded. So that didn’t really work out. Then I also went north; I went to Vermont from my home in New Jersey, where I stayed in a cabin that was just in the woods for a while and did a little disconnect, which was pretty cool.

If you were to give any advice to first-year students at Pepperdine, what would you say?

JM: I always say get involved and get involved early. Don’t be afraid to jump in and put yourself out there because everybody is kind of in the same experience. Don’t feel weird stopping by a club or, I guess, emailing them [and] being like, ‘Hey, I’m really interested in this. Can I join?’ because that’s really how you make friends. That’s how you grow and you’d be amazed where it takes you.