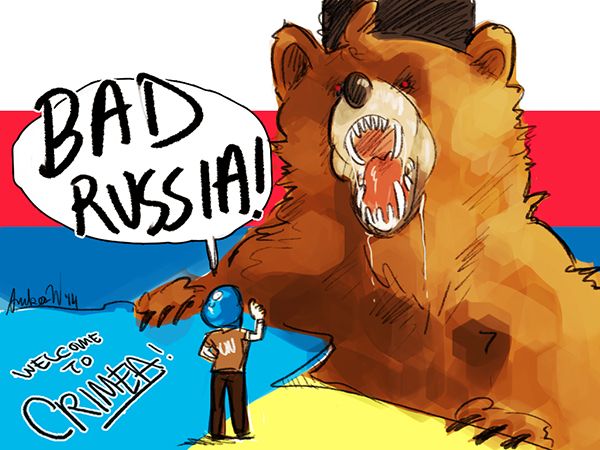 Open a newspaper, check the front page of any news website, or even dare to go on social media, and you are sure to find coverage and commentary on the protests, conflict and turmoil in Ukraine. As the next in a step of aggressive moves by Russian President Vladimir Putin, the situation in Ukraine has quickly soaked up all the headlines.

Russia has been hitting the headlines with increasing frequency, especially over the past year. It first started with Edward Snowden’s flight to Hong Kong and later Russia where he sought asylum after his release of classified documents last May. In a move viewed by many to be a poke in the eye to the United States, Russia allowed Snowden to remain in the country for the time being. Then, in June, there was the controversial piece of legislation which severely limited freedom of expression for people wishing to advocate for LGBT rights in the country that caused a stir.

Russia again came up in headlines last fall when it played a valuable role in brokering a deal for Syrian President Bashar al-Assad to give up his stocks of chemical weapons in return for the United States not intervening militarily. Not content to let the world’s good will last after hosting the Winter Olympics in Sochi, Russia deployed its military to intervene in the ongoing strife in Ukraine over whether the country should build closer relations with Europe and the United States in the west going forward, or rekindle old ties in the east with Russia.

At face value, Russia’s intervention in Ukraine is relatively straightforward; for centuries Ukraine was part of the Russian empire, and for most of the past century was a part of the Union of Soviet Socialist Republics. Those many years of Russian control are what shape the situation today. Policies under both the Russian Empire and the Soviet Union aimed to Russify Ukraine by moving ethnic Russians into Ukraine, promoting Russian language and culture and restricting or prohibiting the Ukrainian language.

The end result of those policies of Russification was the creation of a large ethnically-Russian, Russian-speaking population in eastern Ukraine — particularly the Crimean Peninsula, which has been the center of the confrontation between Russia and Ukraine. In addition to the ethnic Russians living in present-day Ukraine, the naval base at Sevastapol on the peninsula is leased to the Russian navy, providing them an invaluable warm-water port with access to the Mediterranean Sea.

That agreement between the two countries is important and laid some of the groundwork in enabling Russia to effectively conquer a territory with which it doesn’t share a land border, but it’s by far not the most important diplomatic or legal agreement at play ever since tensions have risen in the region. That title goes to the 1994 Budapest Memorandum.

An agreement that most of the world never heard of could upset the apple cart in a major way if things aren’t turned around. In 1994, Ukraine agreed to give up its position as the world’s third-largest nuclear power in return for a guarantee that the United States and Russia would respect and protect its territorial sovereignty. By invading the Crimean Peninsula, Putin didn’t so much ignore the Budapest Memorandum as crumple it up and toss it away, and along with it opened the possibility that all other agreements signed during Russia’s time of weakness in the 1990s could be similarly rejected.

In this world where nuclear proliferation is a serious concern as smaller states seek the ability to deter larger states we need to be extremely careful what sort of messages we are sending to them. Iran is strongly suspected to be seeking nuclear weapons even now, as the United States and Russia try to negotiate to keep them from acquiring them. Instead of affirming that a state doesn’t need nuclear weapons to avoid being bullied, Russia’s actions show that giving up a nuclear arsenal can leave a country vulnerable. If Ukraine still possessed its nuclear weapons, the story of the past few weeks would have been completely different or would have never happened at all.

If we want to see a nuclear-free world, we need to make sure that states no longer feel the need to acquire and possess them to ensure their security. For North Korea and Iran, in particular, the example of Ukraine being at the mercy of its nuclear neighbor twenty years after giving up nuclear weapons doesn’t bode well for their future security.

A U.S. intervention at this time can’t do anything to improve the situation, but we need to call on Russia to pull its forces out of Ukraine and respect international diplomatic agreements. All unilateral and multilateral channels need to be exhausted to find a resolution to the situation and impress upon Putin that not only is he bound by international law, but that reckless actions do nothing to make the world a safer place. 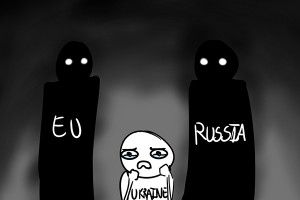 Art by Sacha Irick In 1991, the people of Ukraine and Crimea voted for the independence of both states from the Soviet...
Copyright 2013 Jupiter Premium Magazine Theme
Back to top