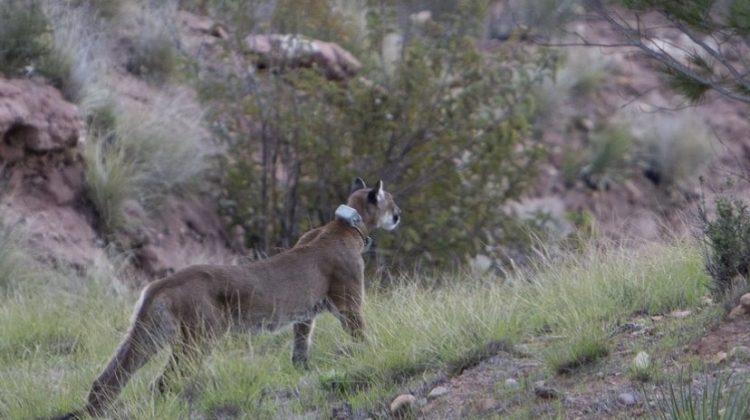 A mountain lion prowls on Pepperdine’s campus. There have been an increase in mountain lion sightings at Pepperdine during the 2021-22 school year. Photo courtesy of Tim Horton

As a result of the recent increase in mountain lion activity on campus, the Public Relations office held an information session regarding mountain lions for students, faculty and staff Feb. 23 via Zoom.

The session offered information about how to stay safe in case of an encounter with a mountain lion and how to avoid confrontations with lions.

“For many in our Pepperdine community, the presence of mountain lions in our area may be novel or concerning,” said Lance Bridgesmith, associate vice president for Administrative Planning Operations and Construction Emergency Services at Pepperdine. “Accordingly, the University provides information to educate and prepare our community on how to respond if encountering a mountain lion.”

In 2018, there were 807 reports of mountain lion sightings statewide to the California Department of Fish and Wildlife said Jeff Sikich, a biologist with the National Parks Service at the Santa Monica Mountains National Recreation Area.

Sikich said only law enforcement can determine if a mountain lion is a threat to public safety. The animal must show signs of aggression such as bearing teeth, vocalizing, ears pinned back or their hair raised on the spine.

“We’re really fortunate in California because none of our predatory species are biologically or physiologically wired to prey on humans,” said Rebecca Barboza, a wildlife biologist with Fish and Wildlife.

Barboza said mountain lions are not naturally inclined to attack humans and assaults are rare. Bridgesmith said it’s still important to know what to do in case of an encounter and how to avoid them.

“We provide these information sessions as a way so our community can hear directly from the authorities responsible for managing mountain lions in our area,” Bridgesmith said.

Pepperdine junior Hayley Lunn said she and a friend weren’t sure what to do in an encounter with a mountain lion.

“I was just talking to someone the other day and they’re like, ‘Yeah, if I see [a mountain lion] like, I’ll run.’ I’m like, ‘Wait, you’re actually not supposed to run,'” Lunn said. “This is why Pepperdine needs to go over like the rules because people are just gonna run away, and actually get attacked.”

Barboza offered tips to attendees in case of a confrontation with a mountain lion — don’t turn and run, appear as large as possible, pick up any small children or pets, face the mountain lion, talk to the animal in a low, firm voice and slowly walk away.

When possible, Bridgesmith said to travel in groups on campus at night.

“We’ve never had a report of a mountain lion attacking a group of people,” Barboza said.

Mountain lions will, however, attack pets or livestock. In the early morning of Feb. 4, a mountain lion took a campus resident’s dog from its backyard, according to an email from the Pepperdine Public Relations Office.

The attack was the only assault by a mountain lion in 2022. In September 2021, deer carcasses attracted mountain lions to Pepperdine, the Public Relations office wrote in a Sept. 7 and Sept. 30 email.

There are preventative measures to take to avoid encounters with mountain lions at private residences. Barboza said not to feed or attract mountain lions’ prey, which is 84% deer.

Residents can landscape their home for safety by eliminating hiding spaces for mountain lions like tall shrubs and bushes, keep pets as well as their food and water indoors and utilize sturdy, roofed enclosures, guard dogs or electric fencing to keep livestock safe.

If there is an attack or damage to property by a mountain lion, Fish and Wildlife first performs an investigation to determine whether the damage was the result of a mountain lion. Then there are three steps to halt future damages to property, Barboza said.

“So it’s not just killing the animal that is prohibited by law,” Barboza said. “A lot of times what would be considered harassment is against the law as well when it comes to mountain lions.”

“Since 2020, when we updated our policy, we have issued a lethal permit in Southern California,” Barboza said.

Although sometimes it is necessary, killing mountain lions presents a tremendous threat to the ecosystem, Barboza said.

“If the mountain lion was removed from the system, the whole ecosystem would change drastically,” Barboza said.

As a counter method to euthanizing a lion, people often suggest relocating the animal to the forest or somewhere else far from suburban areas.

“If relocation worked, we would do it,” Barboza said.

Relocation is an ineffective way of decreasing contact with mountain lions. Barboza said that if you take a mountain lion out of its familiar territory the animal won’t know where its resources are. The lion will come back to its home range.

Additionally, the problem lion is moved elsewhere through relocation, Barboza said. The issue is not solved.

“If we were to move a so-called problem mountain lion to some other location, chances are that mountain lion is going to find trouble elsewhere,” Barboza said.

So, Barboza said, the best way to avoid mountain lion conflicts is to protect your home and know what to do in case of a confrontation — travel in groups on campus at night, don’t turn and run from a lion and walk away slowly from the animal.