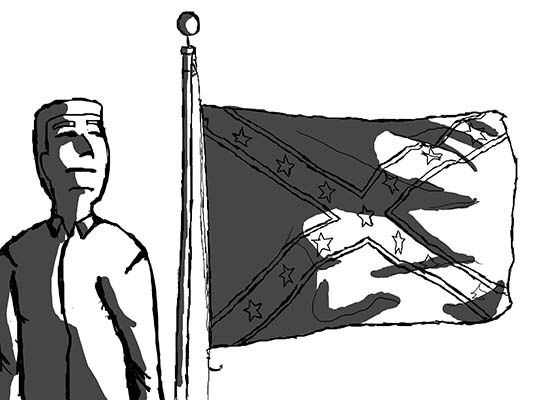 Banning the Confederate flag would deplete the First Amendment of its enormous value to myself and others.

It protects my ability to speak, hear, believe what I choose or express myself if and how I so see it fit. That protection has been limited by courts in the past in a number of ways: I can’t publish lies, defame persons or issue threats. I am restricted to full protections only in my home, and I have more constraints in the public sphere.

These limitations are narrowly tailored by the U.S. judiciary to apply in the very few instances in which free expression could lead to the bodily harm of another. In the case of the Confederate flag, some scholars and individuals argue that such restrictions apply because society deems it a hateful expression such as that of carrying a Nazi swastika. Similar arguments usually cite the offense that comes from such objects as cause for a ban.

The Confederate flag is seen as a symbol of oppression through the eyes of minorities, and I am aware of the potential for harm if people don’t feel safe when their eyes see a banner that was hoisted up to defend slavery. I, too, would be angered to see a cloth that at one point would have been my bondage. Nonetheless, I affirm and would fight for the protection of such a uniquely political expression in all instances because I also am cognizant of how intertwined that expression would be with my own.

To grant the government the ability to discriminate against the expression of individuals — no matter how valid the reasons — would be to set in place the precedent that could be used to discriminate against my exercise of expression. Though the Confederate flag would not be found draped in my dorm room, Libertarian literature fills it. Some works advocate anarchy, while others argue against the war complex. These views are seen as offensive or problematic by some, but am I to pretend they are not my sentiments simply on such grounds?

Moreover, a historical lens reminds us that society was also outraged over the Civil Rights Movement, over the “hippies” who protested the Vietnam war, over the public practice of Muslim faith post-9/11. To ban the Confederate flag as an insidious symbol would be the equivalent of saying, “In American society, we only value speech that doesn’t enrage us.”

I’d ask those in favor of criminalizing this flag: Would you walk up to Martin Luther King Jr. and say, “put away your signs, ignore your passions, and go back to Atlanta because the white man doesn’t like what you have to say?” Or could you lean over toward a recently drafted 18-year-old boy, and say, “Stop with your protests, and let the federal government no longer be disturbed by your opinion?” Still yet would the indignation from an ancient vestment move you so greatly that you might walk over to a person of Muslim faith and say, “Stop praying because the way you exercise your freedoms upsets me?”

It is of highest importance that we not forget that there have been times in our history where society hasn’t liked what a marginalized group had to say, and the results have been violent.

The justices in Texas v. Johnson (1988) did not forget this when they outlined their reasons for upholding the burning of an American flag as a protected act of expression: “If there is a bedrock principle underlying the First Amendment, it is that the Government may not prohibit the expression of an idea simply because society finds the idea itself offensive or disagreeable.” That is the bedrock of my liberty, and of the liberties of the Ku Klux Klan, of racists and bigots — with regard only to expression that does not physically harm a person. To unravel one’s protections would be to set in motion the removal of my own. That is why I would not advocate such a ban.

The often juxtaposed response is that this is a selfish response, or that my desire to express myself is not license to impede the banning of the Confederate flag, which is a manifestation of racism. However, I would suffer the label of being selfish and hold that, as my faith would hold my conscience clear. I believe in a God who has afforded us free will on this Earth. Some choose the right path, and others fall astray, but tolerance affords us the ability to be peaceful with one another.

It is when we don’t club each other on the heads when we disagree that we ever reach peace. It is when we suffer injustice by racists or bigots rather than fight them tooth and nail, that we can gain entrance into Heaven.

Instead, let discussion and debate be our means toward preventing the historical glorification of a symbol of oppression if need be. Let us convince others to share our convictions rather than legally coerce them into doing so.

Justice Louis D. Brandeis codified this type of response when he wrote, in Whitney v. California (1927): “If there be time to expose through discussion the falsehood and fallacies, to avert the evil by the processes of education, the remedy to be applied is more speech, not enforced silence.”