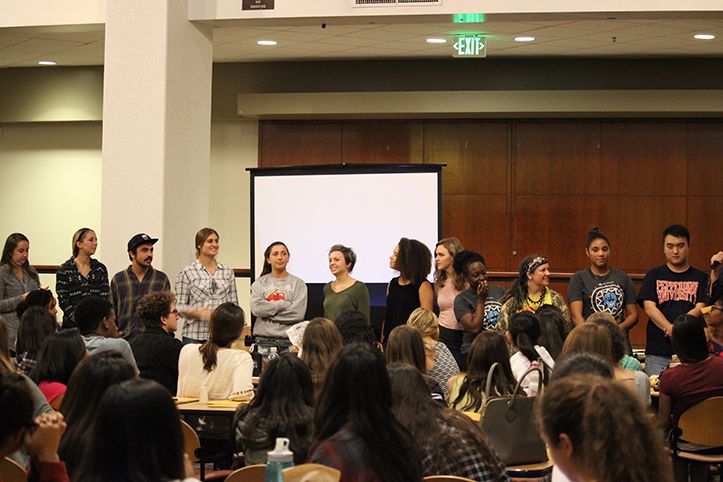 At 8:30 p.m. in the Waves Cafe, members of the upcoming Project Serve program came together for the first time for their Team Revelation event. Project Serve is a program at Pepperdine that takes place over spring break, with groups of students going across the United States and abroad to participate in community service.

The event acts as an introduction to Project Serve and its team leaders, according to junior Whitney Young, this year’s Team Revelation co-planner and a team leader. Students identified their groups through an activity Young planned. By the end of the meeting, the participating students had gotten to know their group members and team leaders.

The event officially began with a long line of students waiting to receive their documents. Close to 190 students applied to be a part of this year’s Project Serve, Assistant Director of the Pepperdine Volunteer Center Justin Schneider said.

“We had a lot of great applications,” Schneider said. “The great thing about Project Serve is that everyone who applies gets in.”

There were also several students after the application deadline who voiced interest in applying but could not for various reasons, Young said.

The event began with a short introductory video about the previous year’s Project Serve. The 24 team leaders introduced themselves, which location they represented and, because of the time of year, their planned Halloween costume.

“This year we have a remarkable group of team leaders,” she said.

Most, if not all, of these team leaders volunteered for their positions. According to senior Katrina Koski, ever since she returned from her Project Serve mission in South Bronx the previous year, she thought about becoming a leader.

“I just wanted to do something meaningful,” Koski said.

Freshman Houston Wilson became a team leader at the start of this year. Having gone to a Jesuit high school, he had a lot of experience with service trips and wanted to lead a trip, he said.

Senior Joy Brown said she was also enthusiastic about becoming a team leader for the first time.

“I love the idea of doing something good and productive with my spring break,” she said.

The process of becoming a team leader is difficult, according to senior Grant Lacey, the other co-planner for the event. Students looking to become team leaders have to attend a class on Wednesday afternoons in the spring. And once the teams set out to their assigned locations, they will have no outside guidance, Lacey said.

“[Team leaders] have a lot of responsibility,” Lacey said. “You’re really on your own.”

After the introductions, the students set out to find their teams. What differentiated this Team Revelation from previous years was how each student found their teams. This year, students each received a puzzle piece inside their respective folders. When put together, the puzzle pieces revealed each team’s meeting place for the night.

Project Serve has had the Team Revelation event since the project was first founded in 1997. How the teams are revealed changes from year to year, and Young’s idea for this year was inspired when she saw a puzzle that Pepperdine’s Jumpstart program uses to teach children, according to Young.

At the end of the event, the teams were fully informed about where they were assigned and just what their teammates and leaders were like.

Vizcar also said her leader, Joy Brown, seemed confident in her leadership skills and made her group feel comfortable.

Another member of Brown’s team, junior Cambria Lagana, said she did not know anyone in her group personally but is looking forward to getting to know them over the year.

“I’m really excited to open this year and follow God more to see where he’s calling me,” Lagana said.

So far the students seem to be fully invested in going across the country and abroad to serve, Brown said. In particular, she said the students were excited to build a community with their team and with the Project Serve organization.

“They’re very enthusiastic, kind and passionate about what they are doing,” Wilson said.

Besides introducing themselves to their teams, the leaders also had several more technical responsibilities to cover regarding their upcoming trip. The leaders were the first to arrive in order to receive instructions from Schneider. Every team leader received a folder containing the project’s commitment forms and schedule for upcoming deadlines, according to Schneider.

“[The event’s] about excitement, it’s about bonding and it’s about scheduling,” Schneider said during the introductions.

Schneider also told the leaders they needed to inform their teams about Project Serve’s fundraising aspect. Students are encouraged to send letters and requests out for donations in order to raise between $200 and $1,400 to cover the costs of the trip, he said.

The very first Project Serve began with a group of students who wanted to help and handled all of the expenses themselves. Keeping with the project’s origins, students are still mostly responsible for contacting organizations all over the world and establishing the housing conditions in each location, according to Schneider. In general, the project does not have much of an existing budget, Schneider said.

There are 15 planned locations for the project: four international and 11 domestic. This upcoming Project Serve will also add the Voice of the Refugees organization in Anaheim as a service location. The organization is responsible for resettling and incorporating mostly North African and Middle Eastern refugees, according to Young. They help these refugees with such tasks as finding suitable housing, sending children to school, learning English and finding jobs, according to the organization’s website.

“Southern California actually has one of the largest populations of refugees in the country, second just to New York,” Young said.

This coming spring break, the students will be partnering with organizations such as Voice of the Refugees in locations all over the world.