Editor’s note: The following section is a series of statements from Pepperdine professors and President Andrew K. Benton in response to the recent election of president-elect Donald Trump. These statements are directed at both the Pepperdine community and the world at large, and do not represent the opinion of Pepperdine Graphic Media — they are the opinions of the individuals who have written them.

“In all candor, I was not enthusiastic about any of the presidential candidates in this election and that was personally discouraging. I have never before felt that way. With friends on both sides of most of the issues, I kept a low profile for the most part. My focus now is on doing my part to aid in the healing that must take place across America and on our own campus. I hope Pepperdine will model thoughtful communication and civility throughout.

I regret that the conclusion of this long, drawn-out campaign yields more uncertainty than it does confidence in the future. I regret deeply that many are left feeling marginalized and even fearful. America is better than that, I believe.

My advice is simple: Don’t allow yourselves to live in fear and apprehension at any stage of your life, especially now. Be strong and resilient in your dreams. Feel free to speak, but take time to listen, too.

Further, there will be another election in four years. Be part of the process that will shape the issues and candidates to lead this nation forward. There is much at stake.”
— Statement from President Andrew K. Benton released to Pepperdine Graphic Media

“Things are almost never as bad, or as good, as they first seem. The more you learn about and and get involved in causes that are important to you, the more you will feel in control of your destiny. Get the facts. Help your cause. Make your future.”
— Paul Hynek, Business Administration Division

“Our political system needs to be reformed; the social, political, economic and racial/ethnic divisions in our country need to be seriously addressed, and this toxic election season must be calmed. Beyond Washington, there are great sources of strength in the American public. and I would like to believe that these can be activated for the common good.”

“We all must pray for and support the democratically-elected President-elect Trump. Voice your support for the good. Peacefully and purposefully voice your discontent for that with which you disagree.”
— Christopher Ng, Business Administration Division

“I am deeply concerned about the results of this election, for several reasons. First, that we have elected a man who has mocked people with disabilities, attacked a Gold Star family who lost one of their sons, disrespected a POW from the Vietnam war and bragged about sexually assaulting women. Not to mention his attacks on the press, the media and free speech. Second, that some of the American people, knowing these facts, would elect this man as President reveals that these voters support bigotry, misogyny and hate speech. Perhaps these voters want a “strong” man to lead them. These actions do not fit my definition of strength: rather, they reveal weakness.”
— Maire Mullins, Humanities and Teacher Education Division

“Perhaps a bit of economics homework will channel nervous energy into something productive after the Presidential election. Using economics, you can study how Trump’s policies (on International Trade, Health Care and Immigration, to name a few) will affect you, America and the rest of the world.”
— Jonathan Burke, Business Administration Division

“It will be tempting to feel overwhelmed at the thought of 50 million of our fellow citizens endorsing the hate, racism and misogyny voiced by our President-elect and to hide away. But we must not hide — we must use our abilities to enact a greater good. So much writing exists to show us the way: the New Testament; the speeches of Martin Luther King, Jr.; Claudia Rankine’s “Citizen.” Read and re-read to sustain yourself.”
— John Struloeff, Humanities and Teacher Education Division

“We are struck by disbelief; what hadn’t appeared to be a reasonable possibility now unfolds before us. We must hold on to our disbelief, preserve it and carry it with us. The logic according to which the world functions has shifted; our assumptions do not hold. The realm of reasonable possibility has expanded. We must seek, through critical reflection, knowledge of newly emergent possibilities so that we might pursue those that lead to a better world and avoid those that lead to catastrophe. We must not march blindly ahead; willful ignorance becomes immorality.”
— Jeffrey Shultz, Humanities and Teacher Education Division

“Two of my grandchildren live in Mexico. They are American and Mexican. Spanish is their mother tongue. How am I supposed to tell them now that they can safely live in their other country? They’re lucky they don’t have to deal with racism and discrimination in their everyday lives. However, millions of kids throughout the U.S. woke up to a country where they won’t be able to escape from this.”
— Joseph A. Huggins, Communication Division

“The words of the Republican candidate against minorities, immigrants, women and others are ugly and hurtful. For this reason, I believe it is crucial for all Americans, regardless of how we voted, to join together and affirm the full humanity and worth of all people, opposing any speech, actions or policies that deny this truth. Such responsibilities are particularly true for Christians, who have been called by Jesus to love our neighbors as ourselves.”
— Kinda Delong, Religion Division

“Here, on the pulse of this new day
You may have the grace to look up and out
And into your sister’s eyes, into
Your brother’s face, your country
And say simply
Very simply
With hope
Good morning.”

Without irony you can still embody this truth Angelou imparted.
Be the fullness of Jesus’ teachings: love your enemies and pray for those who persecute you.”
— Kathryn Linehan, Assistant Director of the Institute for Entertainment, Media, Culture

“One of the hardest things for me to understand about the election of Donald Trump is that Christians overwhelmingly voted for him. Trump appears to live a life that is the polar opposite of that we find prescribed in the Gospels. I’ve heard a lot of talk in recent years about the US being a Christian nation. I think we have given up the right to make such a claim anymore.

For many of us, Trump’s own words, his comments about women, and immigrants, and African Americans, were in and of themselves disqualifying. And we find it very hard to understand how so many Americans could get past those words to anything else he might have stood for.

My heart breaks for my students — the ones with undocumented parents, the women, the students of color, the immigrants. I want to assure them that everything will be OK, but I’m not convinced that’s true.

At Monday’s Walk for Unity, someone made the comment that Trump’s election at least clarified some things. We can all now see the racism; we can no longer claim that the U.S. is “post-racial.” And that means there is much work to be done. We must find a way to come to terms with our racism, to confront it head on, and commit to healing racial wounds. We must learn to listen and empathize.”
— Lorie Goodman, Humanities and Teacher Education 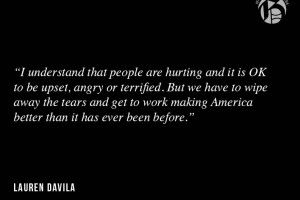 Graphic by Nate Barton I sat on a couch in the newsroom sobbing less-than-quietly. Cuddled together on two small couches...
Copyright 2018 Pepperdine Graphic
Back to top